Kicked Out of My Office 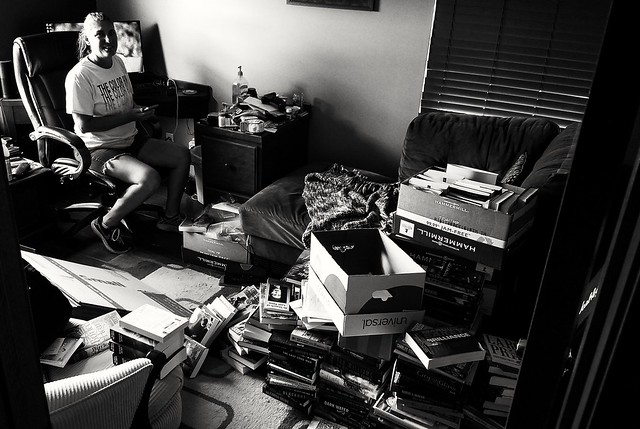 Once again I have lost control of my office in terms of clutter, and once again Krissy has kicked me out of the office so she can go through and declutter for me because my own personal definition of “declutter” is “shove things toward walls and then add more stuff.” I’m currently downstairs in the front room on one of the laptops; upstairs there is thumping as things get shoved into boxes.

I’m presenting this humorously, because it is kind of funny, but I should also note how genuinely grateful I am that Krissy is willing to do this stuff for me on occasion, because I am legitimately terrible at it. And in point of fact over time the clutter in my office has a detrimental effect on my ability to work. I feel cramped and crabby. This is no good when, for example, I am on a book deadline. That I can go to Krissy and say “Heeeeeeeelp meeeeeeeee” and then she goes in and does is one reason you all get books on a reasonable schedule.

So all hail Krissy, Slayer of Unmanageable Offices. For this among so many other reasons, I would not be where I am without her.

← New Books and ARCs, 7/28/17
Sugar Wishes to Inform You That All the August Big Idea Slots Have Been Scheduled →

50 Comments on “Kicked Out of My Office”