And Now, The Moment You’ve All Been Waiting For: My Review of Coke Zero Sugar 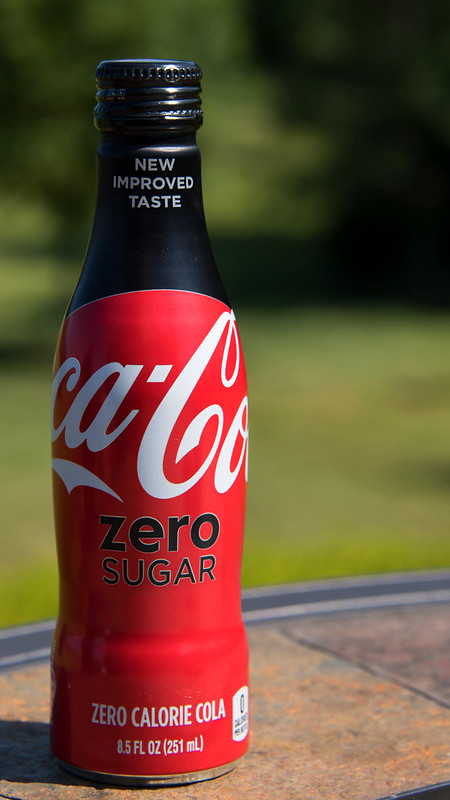 I’m well-known for being an aficionado of Coke Zero — so much so that I was once given my own weight in the beverage by a science fiction convention —  so when Coca-Cola announced it was taking the drink off the market in place of a new, reformulated drink called “Coke Zero Sugar” it was generally thought that my reaction would be to rend garments and howl about apocalyptic seals being broken. I didn’t do any of these, but of course I was curious as to what the new stuff was like.

Well, as it happens, Coca-Cola was kind enough to ship me a couple of bottles of the stuff so I could try it out before it generally hits the market where I live. I tried it two different ways: First Coke Zero Sugar by itself, and then in a sip-by-sip comparison with regular (and soon to be departed) Coke Zero.

When I tried it by itself: I couldn’t really perceive much of a difference between it and my sense memory of Coke Zero with the first couple of swallows. It tasted enough like Coke Zero that my immediate concern (“oh god it’s gonna suck and I will have to wander the desert forever because that will be my life now”) was immediately dismissed. I’m gonna survive the switchover, folks.

After a couple more swallows it seemed to me there were two noticeable differences: It’s not as immediately acidic, and it seems a bit less carbonated. I suspect both of these possibly contribute to the “more like standard Coca-Cola” taste that the company suggests this has over regular Coke Zero. It’s a mouthfeel thing, simulating what you would get with sugar in the liquid; anyone who drinks no-sugar soda and then drinks one with sugar notes the latter feels a little syrupy. Coke Zero Sugar feels a little more like fully leaded Coke than Coke Zero.

This mouthfeel and “less acidic, less carbonated” thing was definitely more noticeable when I was alternating drinks between the two. As a Coke Zero drinker I’m used to the zingier attack of the standard stuff, and would say that overall Coke Zero Sugar is basically a slightly muted version, zing-wise, of the previous iteration.

But, as noted, when I tasted the Coke Zero Sugar in isolation I was not really finding too much difference between the two, and when I did figure out the difference, I didn’t find it objectionable or disappointing. It’s good! It’s fine! I like it! And I suspect that as the old stuff is phased out and the new stuff comes in, I’ll make the switch and continue happily with my life. The only note I would make to myself is a practical one: Coke Zero Sugar should be drunk ice cold because it seems like it goes flatter quicker, which I suspect is down to the apparent less carbonation.

(Oh, one other difference — the aftertaste. How is it different? I can’t really quantify it except to say it is. It’s not bad. It’s just there, like it is with most drinks with artificial sweeteners.)

Coca-Cola wants to suggest that Coke Zero Sugar’s taste is improved, but I think that’s a subjective judgment. I think of it as being a little different, but not so much so that I need to worry about it. Coca-Cola also says it’s more in line with standard Coke’s flavor profile, which it might be, but in my opinion Coke Zero was close enough on this score that this is a case of “why go for the A+ when you’re already getting the A.” I suspect that it’s really down to Coke wanting to accentuate the “no sugar” aspect and needing to fiddle with the formula slightly to justify the repackaging and overall marketing budget. And if that’s somewhere near the case, well, I guess, okay? Mysterious are the ways of large corporations.

But overall: Hey, Coke Zero Sugar is pretty good. I’d say it’s Coke Zero with a subtle nose job: Different, maybe better depending on your personal taste, still largely recognizable for what it is. Which works for me.

← Sadly Appropriate For the Day
The Big Idea: Kathe Koja →

43 Comments on “And Now, The Moment You’ve All Been Waiting For: My Review of Coke Zero Sugar”