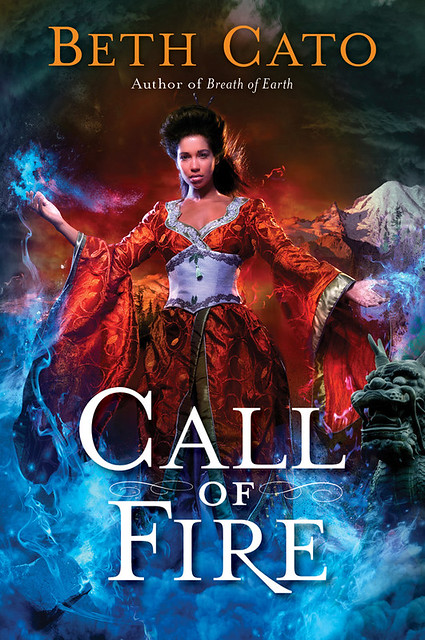 There’s the saying that “those who don’t learn history are doomed to repeat it,” but in order to learn your history, sometimes you have to dig deeper — much deeper — than what is commonly known. This is a fact that has relevance for author Beth Cato and her latest novel Call of Fire.

I love that historical fiction can be entertaining and educational at the same time. When I began to research prior to writing Breath of Earth, the first novel in this series, I was genuinely excited to delve deeper into turn-of-the-20th-century California history. My books feature a 1906 America that is allied with Japan to form the Unified Pacific, a world power in the midst of conquering China as part of its goal to dominate mainland Asian. I bought a number of books on Chinese immigration and experiences in America in that era.

As my research continued for my second book, the newly-released Call of Fire, I found that I dreaded reading more on the subject. I’ve been a history geek since I was a kid and I went into this with the knowledge that Chinese immigrants had been treated poorly, but I had no real comprehension of the horrific abuses they endured.

This wasn’t just about far-off California history anymore, either. This was about my hometown, the place I was born.

Like many other San Joaquin Valley cities, my hometown of Hanford was founded by the railroad in the late 19th century. Chinese men did much of the hard labor to lay the tracks and blast their way through mountains to connect the state with the larger continent. Centrally-located Hanford had one of the largest Chinese communities in the valley. These days, the city is proud of what remains of its China Alley. There’s a lovely tea room there, as well as a preserved Taoist Temple with a gift shop. The Moon Festival each October is a big draw.

When I was a kid, though, I was puzzled that Hanford still had its China Alley but other nearby cities–even larger ones like Visalia and Fresno–did not. My mom told me something like, “They were probably torn down over the years.” That made sense to me. Hanford’s China Alley has some decrepit buildings, too, and it’s only been in recent years that other parts have been lovingly restored to become a year-round attractions.

During my research, though, I finally found the real answer to my childhood question. The other Chinatowns weren’t simply torn down. In the 1880s and 1890s, they were firebombed and the surviving Chinese were run out of town. There were even race riots in vineyards near Fresno.

Hanford still managed to retain some of its Chinese population, but that didn’t mean all was well during that period. I found mention of an editorial from my hometown paper in 1893 that admonished young white women of the county to improve their kitchen skills so that they would not hire Chinese cooks.

That’s when I became angry.

What the Chinese had endured had been erased from local history. Men were murdered. Families terrorized. Livelihoods destroyed. Then the butchery and abuses they endured were forgotten.

When I write about these kinds of racist incidents in my books, I imagine many readers will think that the stuff is pure fiction, all part of the elevated drama of my alternate history. That’s exactly why I include an author’s note in each book along with an extensive bibliography (which I also have on my website at BethCato.com). I want readers to know about the ‘Dog Tag Law’ that required Chinese immigrants to carry an identity card, America’s first internal passport, starting in 1892. I want them to know what happened in Tacoma, Washington, and Honolulu, Hawaii.

I hope people enjoy my books Breath of Earth and Call of Fire, but I also want readers to learn, as I have, that our beloved hometowns may possess dark secrets that need to see the light. We can’t undo the crimes of the past, but we can learn. We can remember.