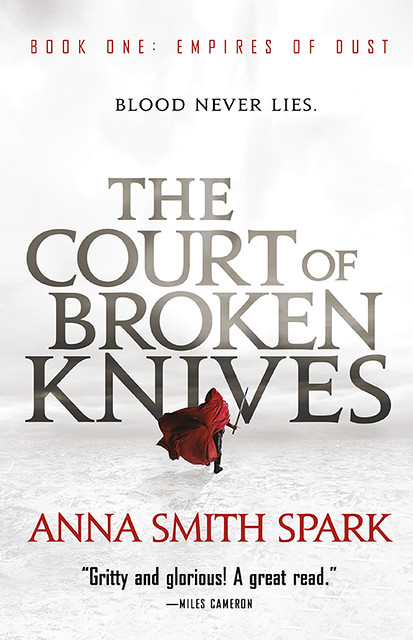 The world we live in is not always peaceful… and maybe sometimes we kind of like it that way, whether we like to admit that or not. Author Anna Smith Spark has thoughts on the act of violence, and how it animates the story of her novel The Broken Knives.

The Court of Broken Knives is a novel about violence.

When I started writing the book, I didn’t have a plot or a world or a cast of characters in mind. What I had was a scene.

A group of men.

I’ve always been fascinated by violence: How one might respond to the opportunity for violence. What doing violence might feel like.  And that’s what The Court of Broken Knives ultimately became about.

I was brought up reading the great myths and legends, the old stories of heroes. The Iliad. The Eddas. Beowulf. Gilgamesh. The Tain. I loved these stories. Read and reread them, immersed myself in them, told myself stories set in their worlds. But what I came back to, as I got older, was the realisation that for so many of these stories we are not reading about good versus evil. We are not reading high fantasy, the last desperate stand where evil is vanquished and the Dark Lord is overthrown. We are reading about violence for its own sake. The act of winning, of killing one’s opponent and glorying in one’s triumph, is the victory. The hero is ‘good’ because he wins.

And yes, ‘he’. These are acts of masculine violence. More women have perhaps fought in battle than we realise, yes, granted. But, historically, organised violence has been the domain of men. Armies and battle hosts have been male places. Places from which women have been excluded. And that in itself is worth thinking on.

Let’s look for a moment on the Iliad. The Iliad was written down over two and a half thousand years ago. It was composed perhaps three thousand years ago. It is the first and greatest masterpiece of European literature, the foundation stone of western culture. It is a book entirely and totally about war. A very large number of people die in the Iliad. Graphically, horribly, and without even the consolation of heaven awaiting them. The whole reason for the war is shown to be futile.

But war is also the whole basis of the Iliad’s society. The leader of the Trojans is called Hector. He’s spent ten years killing Greeks for the sake of a woman who ran off with his little brother. He’s seen most of his brothers die, and his wife’s entire family die, and he knows, deep down inside, that he’s going to die himself. In one of the most moving scenes in the poem, he says farewell to his wife and child before going out to battle, and he knows and we know and they know that he’s not going to come back from it. And this is what he says:

Of the mortal enemy he has killed in war-

A joy to his mother’s heart.

Coming home from battle still bloody with his enemies’ innards. That’s the greatest joy a woman can want for her children. That’s what makes you absolutely the top chap.

The Iliad is not a celebration of war. But is not a rejection of war, either. It makes one terrible, horrifying, entirely obvious point:

Winning at war feels great. And that’s a strange and exhilarating experience to write about—particularly someone who has not ever fought.

Reading about war is enjoyable. Writing about war is immensely enjoyable. And I strongly suspect, from everything I’ve ever studied about history, that actually doing war is even more enjoyable than reading or writing or watching it. Warfare has been pretty much a constant of human history, and those who are good at it have generally occupied the top social and sexual desirability spot. Some war is morally justified.  Most war is not. We’ve always known that. Right back to the Iliad. And yet we do it. We have always done it. We probably always will.

We do it because winning at war feels great. I wanted my characters to have the same feelings as Hector: to understand simultaneously that war is bloody and horrible, but also glorious and exciting and fun.

I do not say this because I think war is a good thing. It is a terrible thing. A horrifying thing. A thing of utter shame and grief.

But I say it because it is a true thing, and a thing that I wanted people to remember in The Court of Broken Knives.