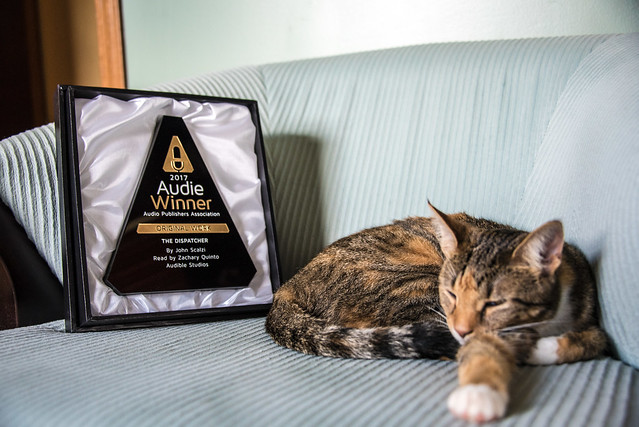 Such is the latent influence of A Christmas Story that whenever I see a box marked “Fragile” my brain pronounces it fra-gee-lay, and another part of my brain says “It’s a major award!” But in today, the box marked “fragile” that came to my house did have a major award in it: the Audie that The Dispatcher won this year. The Audies, in case you were not aware, are the awards that the audiobook industry give out, and this year The Dispatcher was a finalist in three categories, and won in “Original Work,” meaning a production that was designed from the ground up to be an audiobook. I showed the Audie to Spice, as you can see; she was not notably impressed, but then, she’s a cat.

The Audie will not stay on the chair any longer than the cat will; it will go on the award shelf along with the Hugos and Locus and other various awards. I’m delighted to have the physical trophy because I’m proud of The Dispatcher, not only in terms of what I wrote, but how it was brought to life by Zachary Quinto and the folks at Audible. It’s nice to have a tangible reminder that the whole package was appreciated by listeners and industry peers. Thanks, folks.