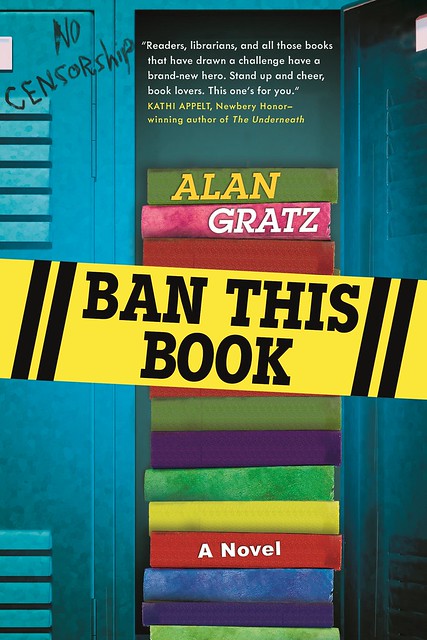 The real question to my mind is whether Alan Gratz’s new novel Ban This Book is itself ever banned. It’s possible! And would be recursive! And as Gratz explains below, it would mean his book would join a rather august list of books that have been banned.

A few years back, someone posted the following question to Yahoo Answers: “Is it OK to run an illegal library from my locker at school?” The author of the question then explained that she went to a private Catholic school where the principal had released a long list of books the students weren’t allowed to read. To be a rebel, the girl brought one of the banned books to school, and soon her friends were clamoring to read it. She added more and more banned books to the collection in her locker, and began running it like a proper library. “But is what I’m doing wrong because parents and teachers don’t know about it and might not like it,” she asks at the end, “or is it a good thing because I’m starting appreciation of the classics and truly good novels in my generation?”

The link was shared everywhere. It was Tweeted and Facebooked and reposted. The story was picked up by Library Journal, and Goodreads, and Reddit. The girl and her banned book locker library were written about on educational review sites and librarian listservs and school blogs. Cory Doctorow even posted the forwarded story on BoingBoing, adding, “Give that kid a medal and a full-ride scholarship to the best library school in the country, please!” The post itself got more than a hundred responses (most of them offering earnest advice and plaudits,) and has been viewed hundreds of thousands of times. And the author of the post kept updating it with more lists of books that had been banned and added to her library.

It was a hoax.

What? Not everything you read on the Internet is true? Gasp and clutch the pearls!

Pretty quickly those skeptical fun killers among us proved the whole thing to be made up. But because nobody ever reads the comments, and because nothing ever dies on the Internet, the story keeps getting found, and shared, and linked to. I’m still surprised when I see it pop up in one of my feeds. Maybe you’ve seen it yourself. Just within the last year, a writer I admire retweeted the link with heaps of praise for the student. Like a lot of other people, I loved this story, and probably like a lot of those same people, I was bummed (but not entirely surprised) when I learned it was bogus.

But unlike everybody else, I stole the idea and wrote a book about it.

To write a book about book banning though, I was going to have to learn a lot more about, well, banning books. Not being in favor of banning books, I’d never tried to do it myself, and I’d never taught at a school or been at a school as a student or parent when a challenge happened. And none of the books I’ve written has ever been banned. At least, not that I know of. That’s one thing I learned as I began my research—that many book challenges and removals are never reported or contested. Very quietly, a book just disappears from the shelf.

I also wanted to know what kind of books got challenged and banned. I knew the famous ones—books like Huckleberry Finn (first banned in 1885, the year after it was published, for being “absolutely immoral” and using “bad grammar and inelegant expressions,” to more recent challenges over the N-word), and the Harry Potter series (witchcraft!). But what else got challenged, and why? For answers, I turned to the American Library Association, who are all over this like evolution disclaimers on Alabama textbooks. Each year, the ALA investigates every public challenge in America, and every few years they publish a book listing every challenge ever recorded. It’s a big book.

The challenged books are as varied as the reasons for challenging them are ridiculous. Among children’s books, The Stupids Step Out was challenged for encouraging children to disobey their parents. In My Teacher is an Alien, challengers took issue with the main character handling problems on her own instead of relying on the help of others. Harriet the Spy supposedly taught children to “lie, spy, back-talk, and curse.” Ewoks Join the Fight was challenged because (spoiler alert!) the Death Star is destroyed. And my favorite: The Lorax “criminalizes the foresting industry.” These were all real challenges.

So rather than make up fake books to challenge in my story, I used real books. Every novel challenged by parents in Ban This Book is one that has been challenged somewhere in America at least once in the last thirty years. The rest of my story—well, that’s all made up. I had to change a few things from the original Yahoo Answers post, of course. My main character would also be a girl, but she would be a lot younger—a fourth grader. And instead of going to a Catholic school where, let’s face it, they can tell you what you can and can’t read because it’s a private school and if you don’t like it you can just stop paying them money and go somewhere else, I would set mine at a public elementary school in North Carolina, where I live. (And where, I’m ashamed to say, we’ve seen our fair share of book challenges and book controversies.) And instead of young adult novels, it would be all middle grade novels that were banned, and Dav Pilkey, author of the awesome and oft-challenged Captain Underpants books would make a cameo, and the finale would involve a Mr. Smith Goes to Washington-style school board showdown, and…

Well, I changed pretty much everything except the part about hiding banned books in a locker and checking them out in secret to other kids.

After all, why let the truth get in the way of a good story?