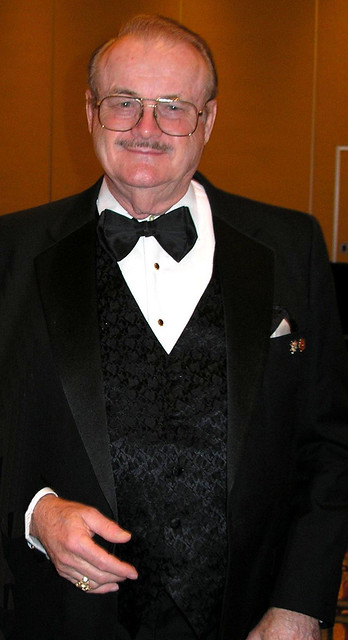 Word reaches me by the president of SFWA and other sources that Jerry Pournelle passed away today, in his sleep. This makes it a sad day for science fiction. Pournelle was an outsized voice in the field, publicly often cantankerous and privately quietly devoted to the field, both as a member and former president of SFWA. And he was a very fine writer, with a number of memorable works, particularly those written with Larry Niven. My favorite of those was Footfall, which thrilled me when I was a teenager, although many would point to The Mote in God’s Eye as their finest collaboration. Both were nominated for the Hugo for Best Novel, and Pournelle himself was the inaugural winner of the John W. Campbell Award for Best New Writer, which he won the same year as he was president of SFWA. Nifty trick, that.

I was not personally close with Jerry Pournelle, but as president of SFWA I had the opportunity to work with him on organizational matters. In that capacity he was always devoted and diligent, and his love for the organization and the field of science fiction was never in the slightest of doubt. He and I differed on many subjects (neither of us were ever exactly shy about expressing ourselves, either privately or in the SFWA discussion areas), but I never doubted his desire to be a positive force in the field, or his willingness to serve when asked. In this, he was the best of men.

My condolences to Dr. Pournelle’s family, friends and fans. His was a good and distinguished life. He will be missed.