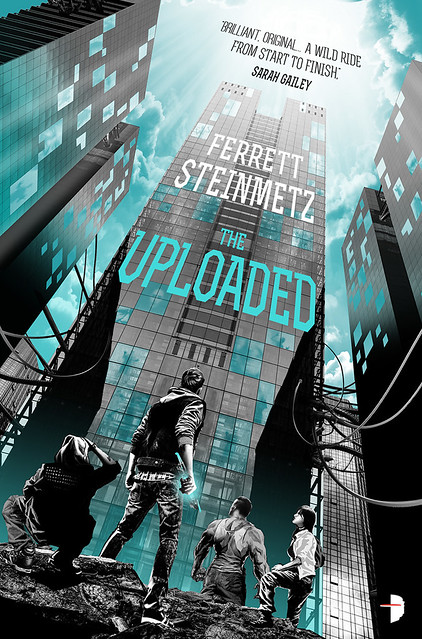 Writers are evil people. You’re walking down the aisle of your wedding, lost in marital bliss, and your writer friend is thinking yes, yes, this is wonderful, but how could this all go wrong?

We don’t mean to ponder these awful outcomes.  We writers should be focusing on your joyous wedding vows, not imagining brutal Kill Bill-style interruptions or wondering what would cause someone to burst into the room to shout, “I do know why this man and this woman should not be legally married!”

But you know, nobody wants to read a story about things going right.

My unfortunate specialty is asking what goes wrong after the happily ever after – which is why my go-to example here is a wedding.  But in my book The Uploaded, I take the biggest happily ever after and absolutely destroy it.  I’m not talking about what gets wrecked after two people get married – I’m aiming at what happens five hundred years after all humanity unites in peace and harmony.

That’s right: The Uploaded is destroying the Singularity.

Now, if you’re not familiar with the Singularity, it’s basically the nerdy Rapture.  At some point we’ll get enough computational power to upload our brains into the Internet, at which point we will have conquered death and everyone gets access to a digital Heaven that’s basically a supercharged World of Warcraft.

Do not get me wrong: in The Uploaded, this works.  This isn’t some crazy pay-for-play system where you shell out millions to avoid death and only the 1% get in.  The Upterlife’s creator, Walter Wickliffe, was fanatically devoted to ensuring that “all should pass through, but for the lowliest of criminals,” and he wound up becoming a politician to ensure no governments could spy on your archived consciousness.  He won a hairy Supreme Court case that ruled that archived citizens were actually human, and as such they can own property, they can be elected to office, and they can vote.

So that’s the perfect Singularity: you work, you obey the law, you get to live forever.  It’s that simple.

Except, of course, that it isn’t.

Because if you’re a student of history, you know that no paradise lasts forever.  Attitudes change.  People forget things.  And even though “forgetting things” is a little different when you have immortal politicians with memories that stretch back 500 years, well….

I’ll let Mama Alex, one of the characters from The Uploaded, explain it.

“Thing is, Amichai,” she continued, “people don’t change all that much. But the most virulent racists died off, and the new kids grew up with more black and Latino and Asian friends, and the world got a shade better. Not perfect – occasionally some freshfaced a-hole raised on yesterday’s thoughts would squirm into power for a time – but better.

“We never could have won if we had to face down all our enemies in their prime, Amichai. We just outlived ‘em.

“You’re right to call ‘em ghosts, Amichai. They haunt us. Every baby could be gene-engineered disease-free. Except the old-guard dead think genetic engineering’s a violation of nature, and they’re still around. And that opinion is not going away. Their old, bigoted culture gives new kids an excuse to be a-holes.

“You might hate death. But we’ve come to fetishize eternity – like hanging around forever is an unquestionable good. Death? It’s got its downsides, Amichai. But it sure clears away the underbrush.”

So society freezes because the old politicians never die.  But neither do their voters.  Within a few generations, the dead outnumber the living.  So nonviolent political change?  Gets increasingly unlikely.

Atheists often laugh at Christians, because there’s no Heaven and look at you restricting your life to live by imaginary rules when there’s no reward but the void.  But the problem with the Singularity is that suddenly, there is a Heaven – you can see it.  Hell, you get phone calls from your dead relatives squeeing about how great it is adventuring against the giant invasions on Wingbright Pass, leaving five-star reviews of the virtual mead.

You can’t have any of that until you die.

Being living becomes unfashionable.  Furthermore, living things become kinda creepy.  I mean, you can spend time crafting some nice woodworked chair in the real world – which you’ll leave behind when you die, and it will rot the whole time – or you can focus on creating virtual things.

The “real” world only becomes useful as a means of keeping the servers going.  And slowly, through a combination of culture and political incentives, the living become trained to hate themselves.  Your life’s too short to get the expertise that, say, architects and doctors with 200 years of experience have.

Your best career move is to die.

And yet that’s not the Big Idea here.

Because I don’t think it’s any surprise that The Uploaded features a protagonist who fricking loves the physical world, a culturally Jewish orphan named Amichai who’s tired of watching all his friends be told that their creativity isn’t worth looking at.  There’s going to be a dawning awareness of the secret government plan designed to cut down the living, and a big damn hero who becomes a symbol for the rebellion.

(It’s not Amichai.  It’s actually his pony.  This is a weird story.)

But that said, the Big Idea is not really “What happens 500 years after we conquer death?”, though that’s pretty big.  The Big Idea is what Amichai wrestles with throughout the course of the book:

That there are no happy endings.

Because history is only work, my friends.  We thought we defeated the Nazis?  Well, the Internet provided an exciting new place to nurture hatreds.  We white folks got taught that Martin Luther King pretty much conquered racism in the 1960s?  Turns out we’ve still got a looooong way to go.  We elected Barack Obama?  Well, the backlash is Trump.

A large part of The Uploaded is about what happens when humanity gives into that urge to believe that the work is done.  Amichai becomes massively influential in the impending revolution, of course, but even though he’s smart enough to understand that the revolution is not the end point, he doesn’t know how to shape this movement so its momentum brings everyone to where they need to go.

The Uploaded is largely about that struggle.  Yes, Amichai wants to tear down the dead’s rule.  But to quote that King George line from Hamilton, You’re on your own.  Awesome, wow.  Do you have a clue what happens now?

Amichai doesn’t.  No one does.  And that’s the Big Idea:

Happy endings are an illusion.  There’s only maintenance of a fair society.  And anyone who checks out of that maintenance becomes a medium in which the most unaccountable horrors will flourish.