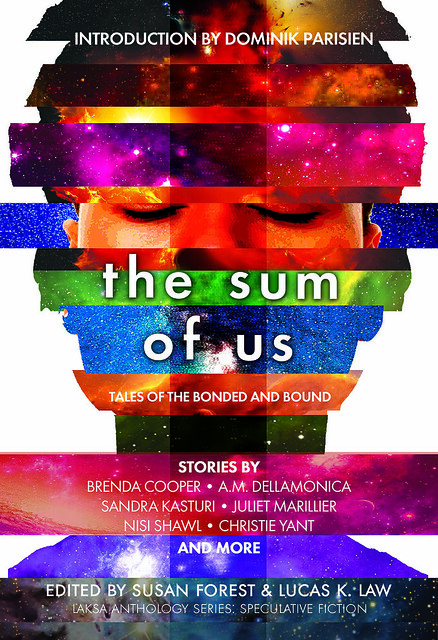 Susan Forest and Lucas K. Law tackle a topic in The Sum of Us that I wouldn’t have considered for an anthology of speculative stories. But the fault here is mine, not theirs, and in today’s Big Idea, the explain why their particular topic served as fertile ground for this collection.

My father, Don Forest, was a remarkable man. He was the first person to climb all the peaks in the Canadian Rockies and Interior Ranges of BC over 11,000 feet (64 peaks), and at age 71, the oldest person to climb Canada’s highest mountain, Mount Logan. And, though he’d always treasured the outdoors, he didn’t take up mountaineering until he was in his early forties.

He taught my brother and sisters and I not only the nuts and bolts of outdoorsmanship, but the culture, the folklore, and the way of life of the mountain community. A highly respected “old mountain man,” he took no greater delight than to teach his children, and later his grandchildren, how to clean a fish, how to make a meal on a one-burner stove, how to repair a broken ski binding twenty miles from the highway. For him, his “Grizzly Group” of mountaineering comrades were his community. The glint of early morning sun on a high peak was his spirituality.

He gave it all up when, in her late seventies, my mother developed dementia.

Of course. An avocation can be a powerful passion, but your mate, your bonded life partner, is a piece of yourself. And she had stayed home many weekends, uncomplaining, caring for home, hearth and children as he went out to make his mark. They cared for each other.

I understand some of this. I love my work, my writing, my editing; but my children and my husband are part of me. Always, they come first. There is no question that the care we give one another is, personally to me and to most people, the highest priority, the highest calling, there is.

So, when Lucas approached me about working with him on The Sum of Us: Tales of the Bonded and Bound, an anthology about caregivers and caregiving, it was not only the timeliness of the subject in a western world of aging demographics, or his amazing line-up of potential authors, or the phenomenal experience I had working with him on Laksa Media’s first anthology, Strangers Among Us: Tales of the Underdogs and Outcasts, that prompted me to say, “Yes!”

It was an opportunity to read stories that captured the dimensions of love, sometimes unreturned; of desperation of a caregiver’s inability to conceive of a world without their partner; of the hard choices faced by those who, for whatever reason, choose not to take up this tough road. To explore the magnitude of human relationships implicit in an anthology centred on what it means…to care.

The Big Idea for The Sum of Us comes from the women in my life—the exemplary courage they have shown when they go through adversity and challenges. They are not famous or well-known. They are just ordinary folks who define the breadth and depth of giving and of caring for a young boy growing up in Malaysia, and later a man making his way in Canada.

The woman who influences me the most is my mother. She lost her mother when she was ten. At eleven, she had to leave home to live in a boarding school, as schooling was not available in her kampong. Two years later, she moved into a rented shack to take care of her three younger brothers (later, a fourth brother) who came for primary education. At fifteen, she left school to make a living. To be independent and be a caregiver at such a young age was amazing and heartbreaking. Imagine the piles of laundry she had to do for four boys—hand washing, line drying, ironing, folding—a constant and thankless chore.

I was six when another strong woman came to live with us. My paternal grandmother did not come willingly, but she could no longer take care of herself.  My pregnant mother took care of her, as well as a household of seven other people. Caregiving turned out to be 24/7. A year later, my grandmother died of cancer.

In the last ten years, mental illness has struck several of my relatives. And it was the women who held everyone together through their strong determination, resiliency, and commitment, even when they felt the sting of stigma and silence from their friends and strangers.

So I totally understand when Liz Westbrook-Trenholm dedicated her story in The Sum of Us: “To the women in my family: gentle or strong, never to be discounted.”

I have seen caregiving that comes from many places, directly or behind the scenes: parents, relatives, day-care workers, educators, volunteers, people in medical, police and fire services, and many more. Caregiving has cast a wider net than what is termed by traditionalists who see caregiving as strictly for the old, ill, or disabled. Caregiving consists of the words “care” and “giving.” Any action that compasses those qualities and makes a difference in someone’s life is deemed to be “caregiving.”

However, my Big Idea is worthless if the stories remain just stories, hidden away within the pages of The Sum of Us, and no one ever knows they exist—the messages they carry about caregiving being a noble profession, voluntary or involuntary, paid or free, short-term or long-term, are lost. It is up to us to find ways to tell and share these stories and our stories of the unsung heroes in our society—invisible in the background or relegated to a footnote, quietly making a difference to those whom each touches. The authors have done their jobs with their stories; let’s take a step further and get these stories into the hands of others.

Suggest or recommend The Sum of Us: Tales of the Bonded and Bound to your local public and school libraries. Help these stories of caregiving and caregivers live beyond these pages.

The Sum of Us: Tales of the Bonded and Bound: Amazon|Barnes & Noble|Indiebound|Powell’s