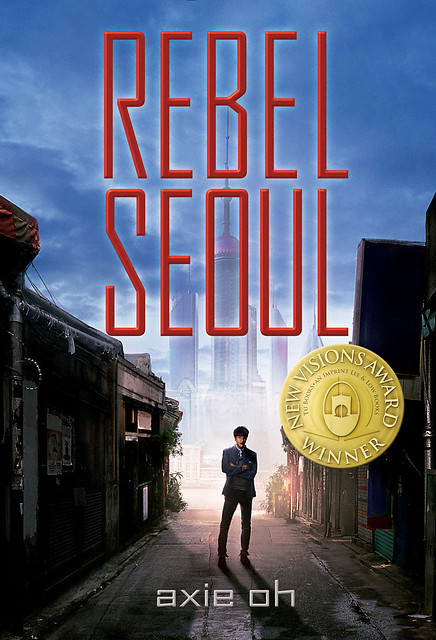 From traded video tapes to the printed word, author Axie Oh’s debut novel Rebel Seoul has had quite the journey. Here she is to tell you how it all came together.

In 2001, I became addicted to Cartoon Network’s Toonami, a television programming block that brought English dubbed anime into the West. The block ran late at night in what was called the Midnight Run. So, as an 11-year-old schoolgirl with reasonable parents, I had to set a timer to record the shows on the VCR. To make it easier, my friends and I would take turns recording the shows and would meet on the weekends to exchange tapes like some sort of grade school smuggling ring.

My two favorite shows were Sailor Moon and Mobile Suit Gundam Wing. Though both anime, these shows were in vastly different genres. Sailor Moon, about a Tokyo schoolgirl with magical powers, was in the “magical girl” genre, which as the name suggests, featured girls with magical powers, while Mobile Suit Gundam Wing, about young men who pilot giant robots called Gundams, was in the “mecha” genre, which focused primarily on robots and elements of science fiction.

I equally loved both of these shows. In Sailor Moon, I found an adventure story with an all female cast, a story of romance with a dashing boy who oftentimes was in distress, and a heroine to believe in, to see myself in (she was blonde, but she was Asian!) and to love with a fangirl’s unwavering devotion. In Gundam Wing, I found an intelligent war story of rebellion and sacrifice that moved me to the core, a cast of beautiful boys to swoon over (be still my adolescent heart!) and some amazing visual eye candy in the Gundams themselves – massive robots blowing up stuff Is. The. Shit.

This was the beginning of my love, not only for anime, but for media in all its forms: TV shows, films, video games, Korean dramas, K-pop, comics, and of course, books.

Rebel Seoul is the second book I’ve ever completed, and my debut novel. Before Rebel Seoul, I’d written a young adult fantasy, as well as several short stories and flash pieces, some of which can be found in obscure pockets of the Internet.

I then built a world and story and characters around this dream image (or gif, really) that stayed with me through each revision of the novel, although it never made it into the novel itself. I imagine it’s in the prologue before the first scene. The government experiment became a super soldier project called “The Amaterasu Project,” where girls were transformed into weapons with codenames: “Ama” for girls with psychic and mental abilities, “Tera” for girls with physical abilities like increased strength and quick reflexes and “Su” for girls with both physical and mental abilities. I wanted to make the idea “big,” so I added giant robots.

So there I was, the big idea: female super soldiers piloting giant robots!

In a way, I feel like I combined those two anime I loved when I was a child. The girls were now the pilots saving a war-torn world.

As a 1st gen Korean American growing up in the U.S., I didn’t have a lot of mirrors in popular media. Discovering Toonami and watching these shows was one of the first times I ever saw people like me – beautiful, strong, courageous people – as heroes. Perhaps this is another big idea, or perhaps this is the big idea, that I wanted to write a book where my 11-year-old self could be the hero.