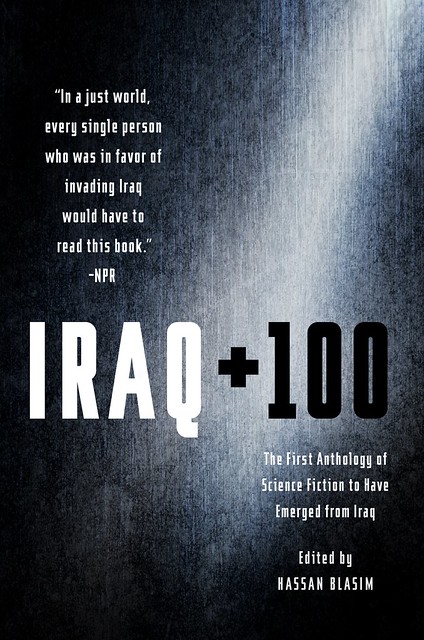 Here in the US, our fate and fortune was tied up in Iraq for many years. But what does the future hold for that country now? Iraq + 100, an anthology of Iraqi science fiction, offers several views of possibilities. Now, the acquiring editor and three authors from the anthology talk a bit about the book and the futures therein.

I got a submission last fall from a small UK publisher and once I started reading I couldn’t stop. The editor of the anthology, Hassan Blasim, asked a simple question–how could you imagine your nation 100 years from now?

The question posed to Iraqi writers (those still in their homeland and those who have joined a world-wide diaspora), has produced an amazing project, a roadmap of what their country might look like following the disastrous foreign invasion of 2003.

Simply put, I believe that Iraq+100 is a piece of fiction that has the potential to make a difference.

I don’t say this lightly.  I am very passionate about all the projects that I take on, but Iraq + 100 has a particularly special importance to me. These writers have given us not just wonderful stories, but the collection itself has a unique voice that I think deserves to be heard. Storytelling has always had the power to not only entertain, but to inform and change hearts. I truly believe that this project has the ability to do these very things.

I think a project like Iraq + 100 would do well at any point in time. In the environment that we find ourselves now, however, I think this book has a much bigger potential.

My story “Najufa” is based on my first trip to the Iraqi Shi’a shrine cities of Najaf and Kufa as an adult with my father and mother in 2010. The tensions that drive the relationship between the narrator and his grandfather in the story is based on the tensions I had with my own father during that trip. My father was born in the east African island of Zanzibar, as a result of his father escaping Najaf during the British occupation of Iraq in 1920 for taking part in an insurgency then. My father returned to Iraq in the sixties, went to medical school in Baghdad, and would visit Najaf and his relatives there often.  However, my father did not travel to Iraq when Saddam Hussein was in power from 1979 to 2003.

I expected the trip in 2010 to be a nostalgic “home coming” for him, but as an old man in his seventies, he seemed oblivious to the whole place or experience. He was more concerned with drinking tea and relating his life experiences to any random person in the tea house than visiting the shrines.  I compared his indifference to the spirituality inside the shrine complex to my observations at the same time of the younger pilgrims there, some who wanted to leave after a few minutes of praying, since their mobile phones are not allowed within the confines of any shrine, as terrorists use them to detonate explosives remotely.  Everyone had to check in the mobile phone outside the shrine, like a coat check, and without phones, that generation became fidgety.  After 2003, regardless of whether one was from Iraq or the “West,” what united us all was addiction to technology. In the story I wanted to project the evolution of how we will become the technology 100 years later, even in an ancient shrine city in Iraq.

Kahramana is a slave girl in a story from A Thousand and One Nights which originates from the Abbasi Era in Mesopotamia, a golden age of enlightenment after which the region fell under conqueror after conqueror and women were further marginalized.

A Thousand and One Nights is one of the few literary examples I recall from the region where women are strong, dangerous characters that move a plot. Usually we’re either ‘damsels in distress’ needing the actions of men or we’re ‘conniving’ and ‘seductive’ inspiring men to act. Women did not swing a sword, not exactly. No surprise there, most of the authors are men.

A Thousand and One Nights did reflect on the norms of its times in the sense that women were spoils of war and slavery existed and was accepted. But women and slaves in those stories, like Kahramana, could be dangerous, independent, smart. Their husbands or keepers were their subordinates in the plot. They had little or no power to move the story along.

My story is more of a pun on A Thousand and One Nights. I make fun of the status quo between east and west, refugees and those on the receiving end. I chose her simply because Kahramana resonated with me as a child. I often passed by a fountain in Baghdad’s Kahramana Square that fascinated me. The fountain was built by a famous Iraqi sculpture in the 1970s to depict Kahramana (sometimes called Morjana) the slave girl from the story of Ali Baba and the 40 Thieves.

Kahramana was standing tall on top of a pile of large jars holding a jug and pouring down onto the jars underneath her feet. According to the story the slave girl was slaying the thieves by dousing them with boiling oil on then sealing each jar shut. We, as Baghdadis, were celebrating a woman slyer. We, in a country where women need men’s permission for anything. And I, the push-over little girl, found her both disturbing and amazing. She just stuck with me.

Though I have come a long way from the timid ‘good girl’ I was raised to be and I like to think I can stand up for myself, I still get pushed around because I’m of the wrong gender, I behave inappropriately for my social class, am of the wrong nationality, standing on the wrong side of a border. It’s fucking endless. And when I want to fly off the handle I remember Kahramana standing over the heads of thieves in a Square in Baghdad, killing them all, indifferent.

The idea for Baghdad Syndrome was unclear at first, thinking about it brought hopes and fears together. Hence, I began to imagine a future in which Iraq heals with a scar, the scar is the syndrome.

Baghdad Syndrome is a collection of physical and mental symptoms reflecting what people in Iraq are going through. Inspired by my last visit to Iraq, I looked more worried about the future than people living there, I saw the syndrome in almost everyone! The heart rate increases with every sudden explosion, and fear of loss. The depression comes from uncertainty, where people do not really know whether they will return home if they went out. Hallucinations and nightmares, due to the verge of reality with unbelievable events. Yet, their faces were smiley, living the moment and kept smiling to survive. Amusingly the painful reality was turned into humour. The blindness in the Syndrome is a metaphor to the endless electricity cuts in Baghdad, leaving a city that loves lights in darkness. Another darkness is the sudden loss of beloved ones, a point in life where nothing else could remain the same afterwards.

The inspiration to link the syndrome with genetic mutations came from my work. During that year (2014), I was writing a report about health-related human rights in Iraq. Revising international reports showed that health was underrepresented. Back then I contacted the Ministry of Human Rights in Iraq, it was a hopeless attempt because having no internal governmental connections means the request will be overlooked. Yet, I received a prompt reply from a local employee striving to share internal reports from several parts of the country. These reports demonstrated increased rates of congenital malformations in newborns in areas still compiled with war wastes. However, the symptoms of Baghdad Syndrome are far away from being a relatively immediate physical impact.

Writing about the future was not an easy task, I needed a link to tell the story. My style of writing is through the lenses of ancient history and riddles. My emotional link with Scheherazade’s statue in Baghdad had always inspired me, I had the sense she was watching and telling stories about what’s happening around her. With my admiration of A Thousand and One Nights, I thought Scheherazade could be my witness and say my riddle this time. When I had the context, the syndrome, and Scheherazade, I could write part of myself in each character in the story to finalise it. After finishing the story I realised, I always sketched the statue with a background of buildings and a pigeon around! Looks like my version of the future was in my sub-consciousness after all!