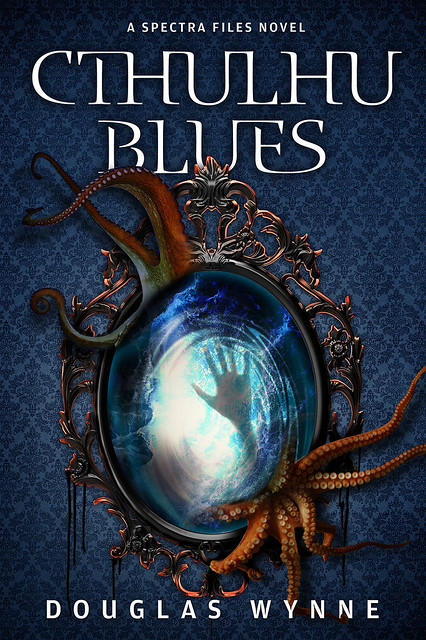 In Cthulhu Blues, author Douglas Wynne wants you to catch the waves. Or perhaps more accurately, to appreciate the fact that the waves already have you — and show something else between them.

Back when I was studying music production and engineering at Berklee College of Music, I had a mystical epiphany that didn’t even involve recreational chemistry. It came to me in the classroom while looking at a handout the instructor had passed around. She was about to present an overview of AM and FM radio technology and wanted us to take a look at the wave spectrum within which those broadcast frequencies are nested. On the left, the diagram showed the subsonic vibrations elephants transmit through the ground to communicate over long distances. Moving to the right, it worked its way up through the octaves of audible sound waves and then on to ultrasonic, radio, microwave, infrared, visible light, ultraviolet, x-rays, and gamma rays.

My education up to that point was far more focused on playing guitar than on physics, but I had read about how even matter is essentially composed of waves—or particles, depending on the method of measurement—vibrating at high enough rates to create the illusion of solidity. Still, seeing it all laid out like that, bottom to top, made a profound impression on me. It reminded me that all human perception is just a glimpse through the slats of a fence, a fragmentary picture of a reality we can only experience with a biological bias and a crude, albeit ever expanding, set of tools to fill in the blanks.

It’s a humbling idea. One that I later remembered I’d first encountered in the horror story “From Beyond” by H.P. Lovecraft. In that tale, a scientist discovers alien life forms writhing in the air all around him by tuning his perception with a resonator device he calls “The Ultraviolet.”

When I set out to reimagine the Cthulhu Mythos for the SPECTRA Files trilogy, this idea of exposure to special frequencies opening up human perception to other dimensions and entities was a major element I wanted to explore. After all, the closest thing to real magic I’ve experienced in my own life is the way that music—invisible wave patterns in the air—has the power to open the human heart to unexpected dimensions of feeling.

Music plays a major role in the SPECTRA books. There’s a cosmic boom box that houses a lab-grown larynx, a grand piano that acts as a portal to infernal realms, and a sea organ borrowed from a real architectural instrument in Zadar, Croatia, that plays haunting chords when the waves roll into its chambers. But the main character, Becca Philips, does her work higher up in the wave spectrum. She’s an urban explorer and photographer who shoots infrared photos of abandoned buildings in flood-ravaged Boston. Becca finds an eerie spirituality in the ghostly light emitted by weeds and vines in that range. But when her photos pick up fractal tentacles seeping into our world from an adjacent dimension, she is caught between cultists employing weird tech to evoke monstrous gods and a covert agency that suspects she might be one of them.

From water to sound to light, there are waves rolling through the entire trilogy. But the wave spectrum isn’t the big idea, perception is: how we see the world and our place in it.

Becca Philips is a character defined by her sensitivity. She experienced loss at an early age and continues to suffer from recurrent depression compounded by Seasonal Affective Disorder. It’s her sensitivity to light and shadow, her unique way of looking at the world, that makes her a great photographer. And it’s her unique perception that entangles her in the unfolding apocalypse and puts her in a position to do something about it. In book one (Red Equinox), she willingly exposes herself to the harmonics that align the human plane with that of the monsters, an act which makes her more vulnerable even as it dispenses with the illusion of a benign reality so she might be empowered to save others from what lurks just beyond that thin veneer. Becca chose this vision as an act of heroism and chose to keep it when offered a drug that would make it go away. But sometimes the cost of courage is that your contact with dark things changes you and makes you one of them.

I knew from the start that as a sensitive, Becca would also be susceptible to the telepathic dreams of Cthulhu slumbering on the ocean floor sooner or later. I knew she would struggle with her sanity and ultimately have to make a judgment about the sanity of mankind at large and whether our supremacy on the planet is ultimately for the best. As a vegetarian and animal rescuer, Becca sees the value of all life. But when you look long enough into the abyss, the abyss looks into you, and in Cthulhu Blues Becca finally has to grapple with the question of whether or not the Great Old Ones might be better for life on Earth than mankind in the long run. The crux of her crisis is that the same empathetic eye that drives her to save animals, children, and civilization, also opens her to the possibility that the cultists might be right to topple the human race from its throne. She has to ask herself what it is in the spectrum of consciousness that sets humanity apart. If we’re not at the top of the food chain anymore, what makes us unique and worth saving?

I’ve always thought it’s our capacity for compassion. Our ability to see others, even the wretched and subhuman, the animal and the alien, with a kind eye. But if we retreat into the tunnel vision of fear at the first scent of crisis, then what do we have left that makes us the good guys? When you’re caught between a militant covert agency and a radical religious cult, are dark gods really worse than white devils?