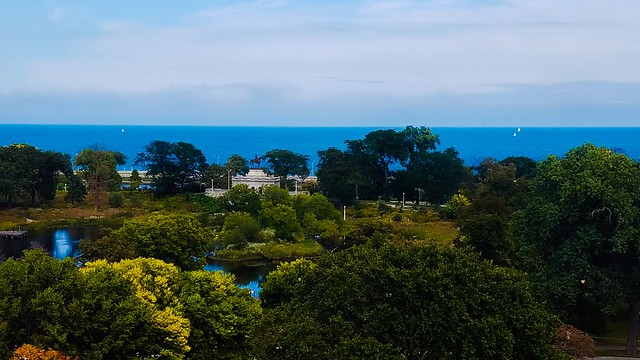 Krissy and I are playing hooky today because we’re going to the Alison Moyet concert in Chicago, which necessitated a bit of a drive. Well, we’re here now, and the view from the hotel is lovely, nary a parking lot in sight. How is your day? 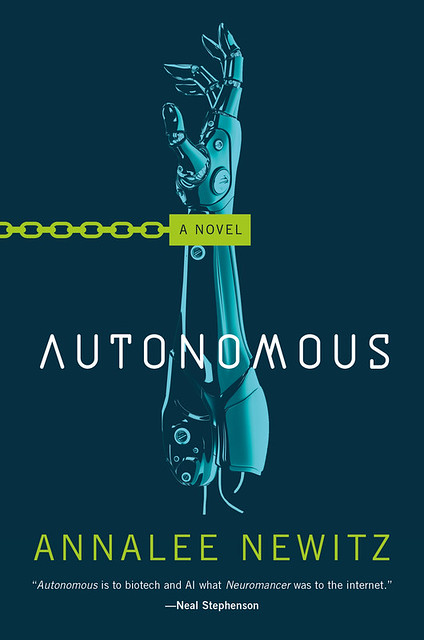 In her debut novel Autonomous, former i09 editor-in-chief and current science and tech writer and editor Annalee Newitz gets under the skin of the healthcare industry and thinks about all the ways it’s less-than-entirely healthy for us… and what that means for our future, and the future she’s written in her novel.

There’s a scene from the Torchwood series Miracle Day that I will never be able to wash out of my brain. After humans stop being able to die for mysterious reasons, our heroes tour a hospital full of people who are hideously immortal: their bodies pancaked and spindled and melted, they lie around in agony wishing for oblivion. For all its exaggerated body horror, that moment feels creepily realistic in our age of medicine that can keep people alive without giving them anything like quality of life.

Torchwood: Miracle Day wasn’t my first taste of healthcare dystopia, but it made a huge impression because it distilled down one of the fundamental ideas I see this subgenre: some lives are worse than death. This is certainly the message in countless pandemic films, where the infected are ravening, mindless zombies. Killing them is a mercy.

This idea takes a slightly different form in books like Kazuo Ishiguro’s Never Let Me Go and Paolo Bacigalupi’s Windup Girl. Both narratives toy with what it means when people are turned into medical experiments, like futuristic versions of the Tuskegee Study. We see some ruling class of people deciding that another class should serve as its organ donors or genetic beta testers. What if somebody were treating us like lab rats, as if our lives didn’t matter?

And then there are the false healthcare utopias, which I find the most disturbing because they remind me of listening to U.S. senators trying to sell the idea that they have a “much better plan” than Obamacare—even though I know people who will die under these “better plans.” Politicians have probably been pushing false healthcare utopias since at least the 19th century, but in science fiction its roots can clearly be traced to Aldus Huxley’s Brave New World. In that novel, everyone is medicating with Soma just to deal with how regimented and limited their lives are.

False healthcare utopias can take many forms, and they overlap with more familiar dystopias too. Some deal with surveillance. In the chilling novel Harmony, Project Itoh imagines a future Japan where the government monitors everyone’s microbiomes by tracking everything that goes into and out of their bodies (yep, there’s toilet surveillance).

Sometimes the false healthcare utopia is just a precursor to a more familiar zombie dystopia like 28 Days Later. Consider, for example, our extreme overuse of antibiotics. Though it appears that we can cure pretty much any infection with antibiotics, we’re very close to living in a world where antibiotics no longer work at all. One of the most terrifying books I’ve read this year is science journalist Maryn McKenna’s book Big Chicken, which is about how the agriculture industry depends on antibiotics to keep animals “healthy” in filthy, overcrowded conditions. This is creating antibiotic-resistant bacteria that are coming for us, pretty much any day now. That’s right–penicillin-doped chickens are the real culprits in I Am Legend.

I’m fascinated by how many false healthcare utopias depend on coercive neuroscience. Often, brain surgery is involved—we see this in John Christopher’s Tripods and Scott Westerfeld’s Uglies series, both about so-called utopian worlds created by neurosurgical interventions that restrict freedom of thought. Maybe these stories focus on brains so much because these are fundamentally stories about lies, and brains are, after all, the organ that we use for lying.

When I started work on my novel Autonomous (out today! yes it is!), I knew I wanted to explore the lies of the pharmaceutical industry and its gleaming ads promising a better life to those who can afford a scrip. One of the protagonists, Jack, has become a pharmaceutical pirate so that she can bring expensive, patented medicine to poor people who need it. But she also sells a few of what she calls “funtime worker drugs” on the side, to fund her Robin Hood activities and keep her submarine in good repair.

Those funtime drugs are why things go sideways for Jack. She sells some pirated Zacuity, a “productivity” drug that I loosely based on Provigil or Adderall. It gets people really enthusiastic about work, but it has some unexpected side-effects that the pharma company Zaxy has suppressed. Now Jack has to stop the drug from killing more people, while also evading two deadly agents sent by Zaxy: a robot named Paladin and a human named Eliasz.

So Autonomous is chase story with some hot robot sex, but it’s also very much a book about how pharma companies sell us an idea of “health” that is actually really unhealthy.

Today pharma companies market drugs the way Disney markets Star Wars movies, and for good reason. Drugs like Adderall and Provigil are supposed to make us feel better and more competent—or at the very least distract us—for a few blissful hours. Just like a movie. I’m not trying to say there’s a problem with taking drugs (or watching movies) to feel good. Nor am I saying that people don’t need anti-depressants and other meds to treat psychological problems. The issue is when these drugs are overprescribed for enhancement, and “feeling really good” becomes a terrible kind of norm. Pharma companies want us to believe that if we aren’t incredibly attentive, productive, and happy every day, there must be something wrong. This paves the way for an ideal of mental health that almost nobody can (or should) live up to.

There’s another, deeper problem that’s caused by selling medicine as if it were a form of entertainment. Nobody would ever argue that going to see the new Star Wars movie is a right. It’s just a luxury for people with disposable income. If we see medicine like that too, it’s easy to fall for the lie that our healthcare system is great even though it only serves the richest people in the U.S.

In the world of Autonomous, the pharma companies are full of guys like Martin Shkreli, jacking up the prices on medicine because they can. They get away with it because so many people in the U.S. believe that anyone can get medicine if they really deserve it. Only a lie of that magnitude could make it seem fair when working class people can’t afford to treat AIDS-related complications. Or cancer. Or a heart infection.

Autonomous is a book about lies. But more importantly, it’s about what happens to the people who see through those lies and try to do something about it. Everyone deserves to have medicine. It is a right, not a privilege. Until we recognize that, I’ll be hanging out with the pirates.