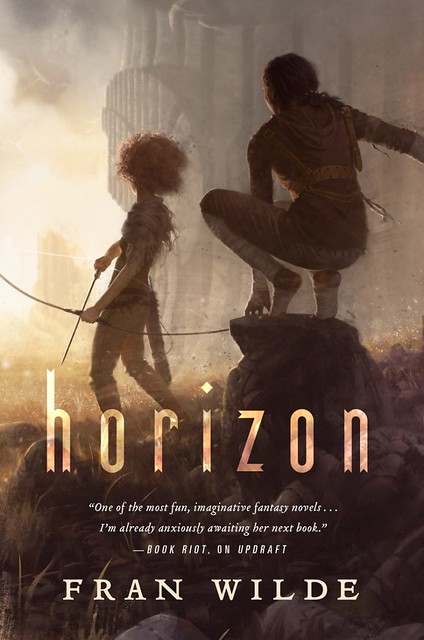 Today, award-winning author Fran Wilde has a shocking confession to make! About something she said! Here! And yes, it involves her new novel, Horizon. What will this confession be? Will there be regret involved? Are you prepared for what happens next?!?

Dear readers of John Scalzi’s blog, for the past three years, I’ve been keeping secrets.

Trilogies are a delicate thing. They are a community of books unto themselves. They inform and support one another; their themes and actions ripple and impact one another. They have their own set of rules. Among them: Write down the main character’s eye color or favorite food so you don’t forget it. You’ll regret using that hard-to-spell naming convention by the middle of your second book. Destroy something in book one, you’re not going to magically have it to rely on in book three — at least not without some major effort. Everything gathers — each choice, each voice.

Trilogies are, by intent, more than the sum of their parts.

And, when brought together, a trilogy’s largest ideas sometimes appear in the gathered shadows of what seemed like big ideas at the time.

In Updraft, book one of the Bone Universe trilogy, what began to crumble was the system that upheld the community of the bone towers. It didn’t look like it then. So I didn’t tell you when I wrote my first Big Idea.

Instead, the first time I visited this blog, I wrote: “At its heart, Updraft is about speaking and being heard and — in turn — about hearing others…”

That was true – especially in the ways Updraft explored song as memory and singing and voice. But it was also kind of a fib. I knew where the series was headed, and voice was only the tip of the spear.

I planned to return here a year later to write about leadership, and I did — and, I wrote about demagoguery too, and abut having a book come out during a charged political season. That was September 2016, Cloudbound, the second book in the series was just out, and wow, that post seems somewhat innocent and naive now. But not any less important.

Again, saying the big idea in Cloudbound was leadership was true on its face, but it was also a an act of omission. And again, singing came into play — in that songs in Cloudbound were being adjusted and changed, as were messages between leaders.

With Horizon, I’m going to lay it all out there for you. Horizon is about community.

Structurally, Horizon is narrated by several different first person voices — including Kirit, Nat, and Macal, a magister and the brother of a missing Singer. These three voices come from different places in the Bone Universe’s geography, and they weave together to form a greater picture of the world, and its threats. A fourth voice appears only through a song — a new song — that is written during the course of Horizon, primarily by one character but with the help of their community. That song is the thread that ties the voices together, and, one hopes, the new community as well.

And, like Horizon, for me, the big idea for the Bone Universe series is also community. How to defend one, how to lead one, how to salvage as much as you can of one and move forward towards rebuilding it.

In my defense, I did leave some clues along the way. I shifted narrators between Updraft and Cloudbound in order to broaden the point of view and reveal more about the lead characters and the world, both between the books (how Nat and Kirit are seen each by the other vs. how they see themselves), and within them. I shared with readers the history of the bone towers and how that community, and the towers themselves, formed. I showed you the community’s [something] – that their means of keeping records and remembering was based on systems that could be used to both control messages and redefine them. I made the names of older laws and towers much more complicated to pronounce (and, yes, spell SIGH), versus the simpler names for newer things. This community had come together, then grown into something new.

The evolution of singing in the Bone Universe is, much like the idea of community, something that can be seen in pieces, but that resolves more when looked at from the perspective of all three books together.

Remember that solo voice — Kirit’s — singing quite badly that first book? In the second book, Nat’s voice joins Kirit’s — a solo, again, but because we can still hear Kirit, and because we know her, it becomes a kind of duet. In the third book, three voices present separate parts of the story, and when they all come together, that forms a connected whole.

When you listen to a group of people sing, sometimes one voice stands out, then another. Then, when multiple voices join in for the chorus, the sound becomes a different kind of voice. One with additional depth and resonance.

That’s the voice of a community. That drawing together of a group into something that is more than the sum of its parts. It is an opportunity, a way forward, out of a crumbling system and into something new and better.