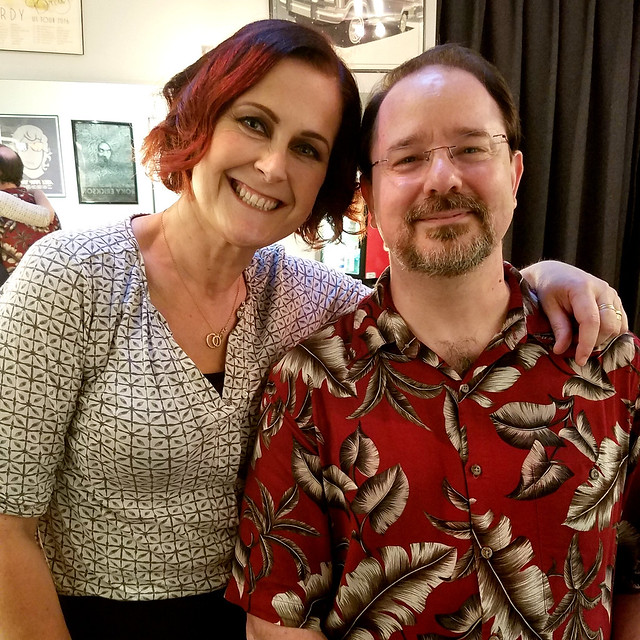 Because yesterday I got to hang out a bit with Alison Moyet, who if you didn’t know is one of my absolute favorite singers, both in Yaz, and with her solo work. We’d become Twitter buddies in the last couple of years and when I mentioned to her Krissy and I would be at her Chicago show she suggested we have a real-life meet. And we did! And it was lovely! And brief, as she had to prepare to entertain a sold-out show (and she did; the concert was excellent), but long enough to confirm that she’s as fabulous in the flesh as she is in her music. Which was not surprising to me, but nice regardless.

(Alison has also blogged about our meet-up as part of her tour journal, which you can find here. Read the entire tour journal, as she’s funny as hell.)

I noted to some friends that I was likely to meet Alison this week and some of them wondered how it would go, on the principle that meeting one’s idols rarely goes as one expects (more bluntly, the saying is “never meet your idols.”) I certainly understand the concept, but I have to say I’ve had pretty good luck meeting people whom I have admired (or whose work I admired). I chalk a lot of that up to the fact that while I was working as a film critic, I met and interviewed literally hundreds of famous people, some of whose work was very important to me. In the experience I got to have the first-hand realization that famous and/or wonderfully creative people are also just people, and have the same range of personalities and quirks as anyone else.

If you remember that when you meet the people whose work or actions you admire, you give them space just to be themselves. And themselves are often lovely. And when they’re not, well, that’s fine too. Alison Moyet, it turns out, is fabulous, and I’m glad we got to meet.

(Which is not to say I didn’t geek out. Oh, my, I did. But I also kept that mostly inside. Krissy found it all amusing.)

24 thoughts on “Why I Had a Good Tuesday This Week”