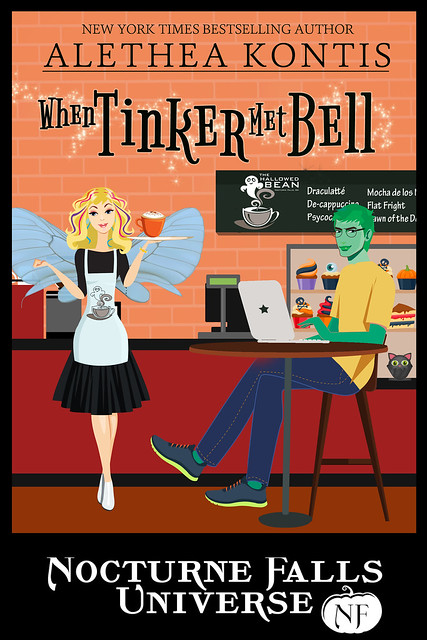 In When Tinker Met Bell, Alethea Kontis is working in the universe of another author. How does she do it? As it happens, she drew inspiration from another universe entirely, one she visits once a year.

In 1996, fresh out of college with a Chemistry degree and absolutely no idea what to do with the rest of my life, the manager of the Waldenbooks where I worked convinced me to accompany her to my very first SF convention. It was called “DragonCon.”

There, among the misfits and geeks from all walks of life, I found my tribe. Publishers, authors, artists, actors, and everyone in between—our common ground was that we just loved being fans. As DragonCon grew, I grew with it, evolving from t-shirt wearing fangirl to tiara-wearing professional. Every Labor Day weekend, Atlanta, Georgia is my home away from home. There, I am Katniss. I am the Anarchy Cheerleader. I am the Princess. I am Wonder Woman.

Fast forward to 2015. My friend, neighbor, and fellow writing group member Kristen Painter has this series called Nocturne Falls. They are sweet (read: no sex), funny paranormal romances, set in a small town in Georgia where it’s Halloween 365 days a year, to mask the fact that vampires and werewolves and witches really exist. (The first book—The Vampire’s Mail-Order Bride—is permafree across all platforms, if you’d like to check it out.) The first handful of Kristen’s books sold so well that she just couldn’t write them fast enough to satisfy her fans. So she set up her own publishing company and graciously selected a few authors to play in her universe.

I was one of the chosen few.

Now, I’ve worked in other worlds before. The Dark-Hunter Companion I wrote with Sherrilyn Kenyon hit the New York Times list back in 2007…and then the Dark-Hunters got so tangled up in movie contracts and rights grabs that I wasn’t able to work with Sherri again until a decade later. Last year, I dipped my toe into the Kindle World IP of another local writer, Roxanne St. Claire. The contemporary romance novella I set in her Barefoot Bay was so good, my editor told me to change nothing. (This never happens.) But the book released last October, right before the election, and subsequently got buried.

I would be an idiot to try this again, right?

Only…I know Nocturne Falls. Once a year, I essentially live there.

I know what it’s like to get up every morning and put on a costume and glitter and go to work. I know the pain of the ill-fitting tiara and the 12-hour corset. (I know to never sacrifice your feet, no matter how cute the shoes are.) I have hosted sideshows and walked in parades. I know how it feels to have a crush on someone in costume, without any idea who they are in “real” life. I know how freeing it is to dance your face off at a rave while standing between a fairy, a stormtrooper, and a guy in BDSM gear.  I know how easy it is to almost step on a camouflaged Carpet Commando, and how jealous I am of every person who gets to drive Ecto-1.

And because I was raised at DragonCon, many of the staff and volunteers and track directors are like family to me now. The microcosm of ODCers (Original DragonCon) has much of that small-town vibe about it. We follow each other on Facebook, mourn pets, see children start new years at school, and exchange holiday cards. We hug each other when we can at con, exchange gifts, and then go to work entertaining the tourists and looky-loos. We name awards after each other when we die.

I know these things. And everyone tells us that we’re supposed to write what we know. So I accepted Kristen’s offer.

The Truth About Cats and Wolves debuted in the first Nocturne Falls Universe launch. I made sure a few of Kristen’s characters appeared as cameos, but mostly I stayed in my wheelhouse. I kept the characters YA, because I will always be YA at heart. I made my heroine a Greek girl whose magically-inclined parents work at the best diner in town. Again, not so much of a stretch for me. And then I gave Kai a best friend named Bellamy Larousse, a happy-go-lucky, over-the-top southern belle cheerleader who also happened to be a barista…and a fairy with giant wings.

I knew, without a doubt, that I wanted my follow-up book to be called When Tinker Met Bell. Happily, my first book performed well enough to get me invited back.

R.L. Stine is the only other author I know who comes up with a title before plotting out any of the book. But I did have a few other tidbits in mind. Like, Bellamy was a terminally optimistic fairy, so Tinker would have to be a pessimistic goblin. And despite the fact that goblins and fairies can’t be friends, Tinker and Bell make it work anyway. My story would feature large helpings of Shakespeare (star-crossed lovers, you know), Dungeons & Dragons, and Labyrinth. But unlike Sarah, Bellamy would get her Goblin Prince, come hell or high water.

Because that is what we nerds do when we get the chance: we rewrite history.

Well, my history, anyway, the one with Yule Balls and Robot Wars, parades and masquerades. Because this is the world I know. And in my world, everyone—every misfit, misplaced geek who comes to town—deserves a happy ending.

Even more, we deserve to have one heck of an adventure getting there.