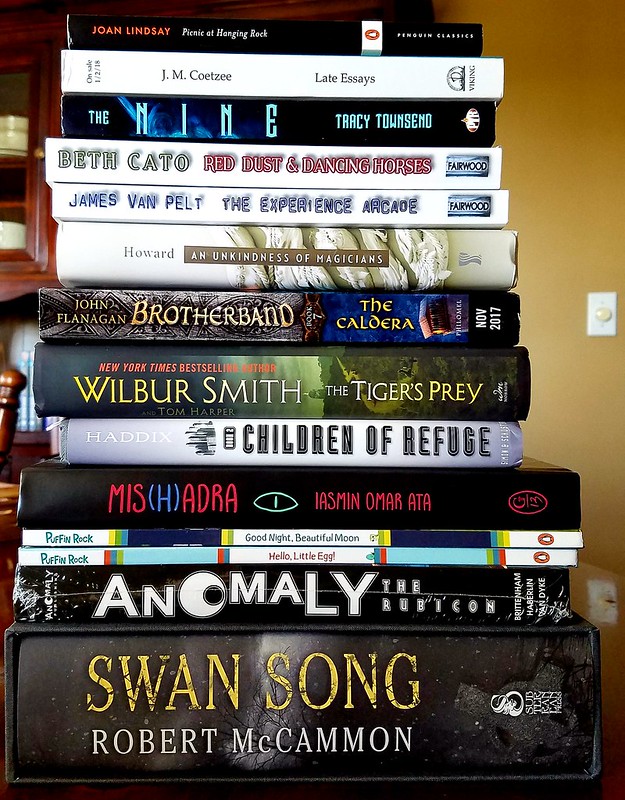 Well, September went pretty quickly, didn’t it? To send it off, here’s a stack of new books and ARCs that have come to the Scalzi Compound. Tell me what speaks to you from this stack, down in the comments. 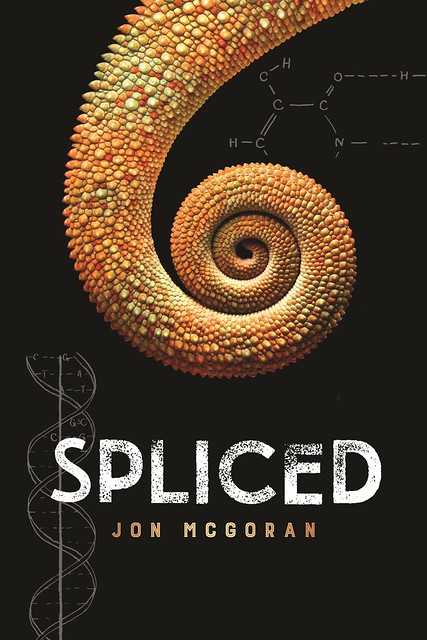 What’s the next step beyond gnarly tattooing? Jon McGoran has an idea, which makes up the central conceit of Spliced. But how he got there is another story entirely.

I came up with the idea for Spliced while researching my book Dust Up, an adult thriller about biotech in big food and pharmaceuticals. Researching science thrillers is a lot of work, but it’s also a lot of fun—sometimes too much fun, especially when you’re under a tight deadline and find yourself absolutely engrossed by some little nugget that is only tangentially relevant to the story that you should, at that very moment, be writing.

One topic that I came across, which I knew was only slightly relevant to the book I was writing, but which I also knew I would write more about later, was bio-hackers. Much like the people who built computers in their garages in the seventies and eighties, these amateur scientists are doing basement biotech in their own homes. Some of them know exactly what they’re doing; others not so much.

Part of a long tradition of citizen-scientists, I found it fascinating and compelling, but also vaguely terrifying in an, “Oh, so that’s where the plague that kills us all is going to come from,” kind of way.

I knew immediately that I wanted to write about this somehow. The most obvious idea to me was that plague, mentioned above. But I wanted to do something a little subtler, and slightly more removed from the garage science aspect of it.

That’s when I thought about gene splicing as a form of body modification: people splicing animal genes into their own to change themselves in subtle or drastic ways, to become chimeras. Given some of the extreme forms of body modification out there, and the ubiquity of tattoos and piercings, it seemed to me almost obvious that if such technology was available, there were those who would use it. Then I started to explore why.

One of the great aspects of writing science fiction is the opportunity to build and explore worlds of your own design, and when writing about the near future, I find especially fascinating the combination of outlandish and familiar, the changes both expected and unexpected, intended and unintended.

But when I decided that I would be writing in about a future several decades from now – enough time for gene splicing to become a low-tech, garage-based procedure – I realized it had to be a world dealing with much more acute effects of climate change. To ignore that in the future would be too much like denying it now.

It was a fascinating aspect of writing the book, made easier by a devastating series of rain and snow storms that repeatedly knocked out power infrastructure and crumbled roads in my area.

While climate change and gene splicing were initially separate but coincident aspects of the same future, I came to realize more and more how much one informed the other. For many of the chimeras, getting spliced wasn’t simply about a certain look or an act of rebellion, it was a statement – about oneness with the natural world, or separation from a humanity that so disregarded it, or even an homage to one of the many species rapidly going extinct.

As I continued to flesh out the world in which the story would take place, I quickly realized that the central premise—young people getting spliced and becoming chimeras—would have an impact on the world in which it took place, and would provoke a reaction from that world. Looking at the world around me –  even back in the quaint, naïve days of a year or two ago – I knew that reaction would not be entirely pretty, and that the bigotry and intolerance I saw wouldn’t likely have disappeared by the time Spliced takes place (although, to be honest, I had hoped it wouldn’t have gotten so much worse so quickly).

That reaction became the final major component of the premise of Spliced—a religious and political backlash of intolerance against chimeras that coalesces around a law—The Genetic Heritage Act—that defines anyone whose DNA is not 100 percent human as no longer legally a person. It’s a stupid law, written by ignorant people, but with devastating effect. And as we’ve seen too many times in human history, when people define other people as less than human, it opens the door for wrongdoings of the most horrific kind.

With the themes and ideas and setting of Spliced largely in place, I was able to focus on the story itself: Who are the people involved, what do they do and say, how do they drive events and how are they impacted by them. Those fundamentals of story are obviously incredibly important to the book, but they are also incredibly important to me as story-teller, and as a person who spends more time with imaginary people than real ones. I absolutely develop emotional attachments to my characters (which is one reason I’m so fond of writing series).

But apart from the joy of bringing these characters to life, one of the things I love most about writing the books I do is the intellectual journey from cool idea to cooler ideas to deeper meanings, and wrapping it up in a believable world, compelling characters, and, hopefully, a kickass story.