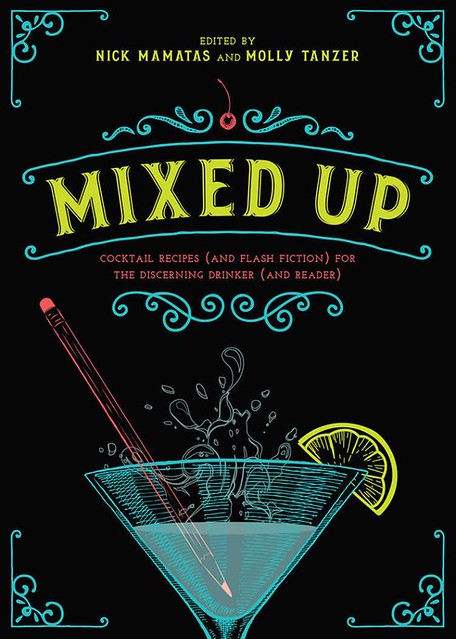 Drinking and writing: Two activities that have gone together famously (and occasionally, infamously) over the years. Now here’s Nick Mamatas, co-editor of Mixed Up: Cocktail Recipes (and Flash Fiction) for the Discerning Drinker (and Reader), to add a twist to this celebrated concoction. Yes, I just made a pun. No, I’m not sorry.

It’s actually a little idea: very short fiction celebrating cocktails, with recipes and flavor text. There are plenty of cocktail books organized around literary themes, and plenty of fiction titles that include recipes, but the exact formulation of ingredients in Mixed Up Cocktail Recipes (and Flash Fiction) for the Discerning Drinker (and Reader) is brand new.

Mixed Up is designed for the food/beverage section of the bookstore, featuring classic and new cocktail recipes, and flash fiction by a cross-genre selection of writers including fantasists Jeff VanderMeer and Carmen Maria Machado, crime writers Jim Nisbet and Libby Cudmore, thriller authors Robert Swartwood and Benjamin Percy, and literary fiction authors Jarret Kobek and Cara Hoffman. (And, as book covers say, “many more.”)

What’s the big idea? Well, once upon a time, there was fiction everywhere: in the magazines full of household tips, and the ones about hot cars and hotter pin-ups. Junior’s little weekly school magazine had short fiction in it, and so did the coffee table magazine for the whole family. Daily newspapers ran occasional fiction as well. And that’s almost entirely gone now, having been replaced by listicles, bullet points, and pie charts. You know, content. My co-editor and I wanted to bring fiction back as an equal partner to non-fiction.

And there’s plenty of good non-fiction being written about cocktails. The origins of the drinks, and their ingredients, are utterly fascinating, as are the life stories of the people who invented and poured them. And of course the tales of those fueled and felled by alcohol are also endlessly compelling.

What’s been missing is the ineffable something that only fiction can provide. Anecdotes tend to simply evaporate before offering an epiphany; historical gossip lacks for climaxes, except for the tragic classic: “And then the famous author drank so much he stopped writing and just died.” We wanted to offer something different—compelling narrative as the central ingredient, not just the garnish.

Mixed Up was not easy to place with a publisher, because it was so…mixed up. Recipes and essays about drinks? Sure! But fiction?

“Where would it go?” editors wanted to know. How do you sell such a book to stores; they’re definitely not going to put it on all applicable shelves at once. Other anthologists twisted up their faces at the idea—“Yeah, but how can you sell to SF and crime and literary readers at the same time?” Our answer was simple: Mixed Up is a cocktail book, and a gift book. We’re reclaiming space for fiction to exist outside the fiction shelves.

We want thirsty readers to open our book and discover not just the amazing recipes perfected by co-editor Molly Tanzer, but also a family of fire-breathers, a midnight crime spree among the kiddie play structures in a suburban backyard, an illicit flask in the hands of a pregnant woman attending an art exhibit, and that really amazing East Village party Vladimir Putin secretly attended back in the year 2000.

We think you’ll like it. And if not, have one more round of your favorite drink, then read the stories again.