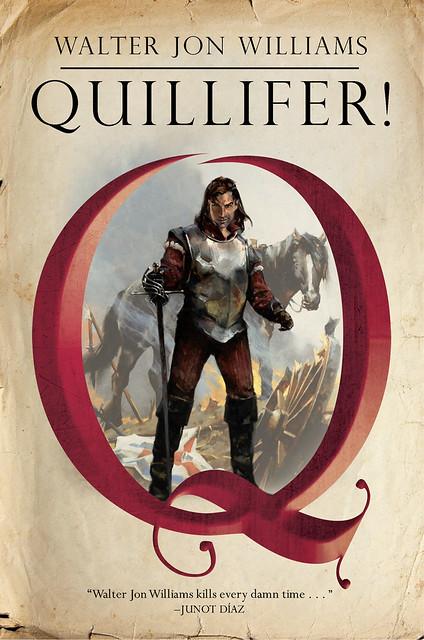 You can’t judge a book by its cover, but a cover can still tell you a lot about a book. When I saw the Quillifer cover, I felt like I already knew more than a little bit about Walter Jon Williams‘ titular character. In his Big Idea, Williams confirms my suspicions. Read on to find out who Williams has imagined, and how he fits his illustration.

Ideas for my fiction never arrive from a single place. Some come from my reading an article in a newspaper or magazine; some come from a brainstorming session with friends. Some ideas come from reading other fiction– either I think to myself, “I believe I have discovered an aspect of your premise that you have not considered,” or maybe I get annoyed and think, “Oh my god, I can do better than that!”

Two novels came from dreams– one a brief flash lasting only seconds but setting into motion the first of a series of tumbling imagination-dominoes that resulted, later that day, in the complete plot of a novel. The other novel, Implied Spaces, was the result of the only lucid dream I’ve had in my life– I dreamed the first 100 pages or so, and then awoke with a pretty good sense of where the rest of the book was going.

Quillifer came about because I took a pleasant autumn walk. I live in the Rio Grande Valley, a strip of bright green drawn down the brown, arid expanse of New Mexico. My neighbors are ranchers and farmers, and their fields are irrigated with water drawn from the river. A walk along the irrigation ditches is a perfect way of clearing the mind, ambling along while enjoying the trees, green fields, horses, cattle, and the frogs and fowl that live in the water.

So one afternoon, about ten years ago, I set out for a walk while listening to an audio book of Peter Ackroyd’s biography of Shakespeare. And by the time I came home, some ninety minutes later, I came back with six books plotted and the name of my protagonist.

I have no idea how any of that came about: there must have been something about the day, the trees and the fields and the frogs, and my receptive mind, and Shakespeare, and maybe Peter Ackroyd. But one thought was foremost in my mind as I recorded my ideas later that day.

If I write this, it will be a lot of fun.

There were a number of good reasons why I couldn’t have that fun right away. I was contracted to write some other books before I could start anything new. Then Ralph Vicinanza, my long-time literary agent, passed away, and I had to look for a new agent.

But more importantly, I was known as a science fiction writer, and the six books of the Quillifer series were secondary-world fantasy. (Now I thought that my novel Metropolitan was high fantasy, but readers disagreed– they seemed to think it was some kind of weird science fiction.)

I could toss off one fantasy novel, maybe, without endangering my career as an SF writer– but leaving my primary career for five or six years, while I wrote in another field, would probably put a stake through my SF career, and I wasn’t entirely ready to risk that.

But by and by, I succumbed to the temptation of having a lot of fun, and I started to write. And then I sold the first three books to Joe Monti at Simon & Schuster.

But I hadn’t sacrificed my SF career after all, because I also sold three more books of my far-future Praxis series to another publisher. Fortunately both publishers were willing to let me alternate deliveries of the books, so I’d be writing fantasy and SF in alternate volumes.

Now I could start enjoying myself.

Whether the reader enjoys Quillifer or not will depend entirely on whether or not they find the hero congenial, for the book is narrated entirely in Quillifer’s voice. Quillifer is a young man, lowborn but bumptious and roguish and on the make, an apprentice lawyer and serially in love. Though he finds himself in war and peril, he prefers to skate through life on brains and charm.

In fact he’s the smartest guy in the room. His problem is that he won’t shut up about it. He will cheerfully and eloquently offer solutions to every problem under discussion, and a great many that aren’t. He mocks his enemies, laughs at their pretensions, sleeps with their wives, and satirizes their failures.

Naturally some of these people are not inclined to appreciate his gifts. His cleverness gets him into at least as much trouble as it gets him out of.

But for the most part he has fun. I’m betting that readers might want to have fun along with him.

Fun has been a little hard to find in fantasy of late. Post-Game of Thrones and its well-deserved success, shelves have been so flooded with works that concentrate so exclusively on violence, violation, and despair, that the term “grimdark” has become a commonplace. I decided to provide an alternative.

Not that Quillifer is without tragedy. Its protagonist faces one harrowing situation after another. But I strove for balance, because I simply don’t find it convincing to write a world where only bad things happen and where happiness is impossible. Tragedy and misery may be part of the human condition, but so is laughter, song, and romance, and Quillifer finds his share of all these things.

In his adventurousness youth he is a useful guide to his world, which is not of the Middle Ages but more akin to the Northern European Renaissance. The printing press has ended the monopoly on literacy enjoyed by nobles and monks, and gunpowder has made a common soldier the equal of a knight. Quillifer intends to discover whether, in this changing world, it is possible for a clever, educated commoner to rise in the world. He’s not a lost prince looking for a lost throne, he’s a charming high-flyer looking for the main chance. This brings him into conflict with the established order, much to the latter’s dismay.

Not that Quillifer’s spending all his time on the hustle: there’s a whole world to explore. And I pride myself on some fairly thorough worldbuilding– if there’s one thing taking nearly a decade to write a book will do, it’s being able to think about it a lot, and to do tons of research. (And as an SF guy, I love me some research!)

Though I pride myself on my imagination, the research kept turning up bizarre things that turned out to be far stranger than anything I’d been able to think up on my own. We tend to think of the Middle Ages as fairly static and simple, and of Medieval society as consisting of a number of orderly classes like royalty, nobles, knights, and serfs. In reality the Middle Ages were complicated and weird, as I discovered when I visited Gdansk and discovered King Arthur’s Court, complete with a high gothic building, a round table, and the coats-of-arms of Arthur’s knights.

I had always assumed that King Arthur belonged somewhere in Britain and not in Poland, but discovered that King Arthur’s Court was built in the mid-Fourteenth Century by wealthy local burgesses, who dressed up as knights, called each other by made-up knightly names, and held feasts, fairs, entertainments, and jousting. They were very much like our Society for Creative Anachronism, except that in their case it was Creative Realism. They were cosplaying the Middle Ages during the actual Middle Ages!

Forgive me for thinking that was pretty strange.

People also tend to think of the Renaissance as a period of art, poetry, and humanism. Which it was, but it was also a period where millions of people were killed over the difference between transubstantiation and consubstantiation. Enlightenment and invention had created better and more efficient ways of slaughtering people.

So who can thrive in an era of change? Someone who’s smart, flexible, informed, free to act, and unhampered by obsolete dogma.

“Well,” I can hear you thinking, “so far you’ve got a fine historical novel, but I believe this is supposed to be a fantasy.”

Well, yes, I provide fantasy stuff, too, and it’s fantasy stuff that I had nearly a decade to think about, so it’s about as thick and layered as everything else. I don’t want to go into it in detail, because that would easily double the length of this essay, but suffice it to say there are fantastic beasts, exotic humanoids, magic, a cursed weapon, and one tempestuous, vengeful, beautiful goddess whose relationship with Quillifer is, umm, fraught. (It’s one thing to challenge the earthly establishment, but challenging divinity is much harder to do.)

I hope you can tell that I had a lot of fun creating this book. I did my best to make the fun as contagious as I could.

I am sufficiently modest not to praise myself in the terms which I feel I deserve, but egotistical enough to let someone else do it. I shall conclude, therefore, with a quote from the Pulitzer Prize-winning author Junot Díaz, who very kindly provided a blurb that graces the cover.  “Walter Jon Williams is a visionary of tremendous power and originality . . . He kills every damn time.”

You know, I probably should have led with that.