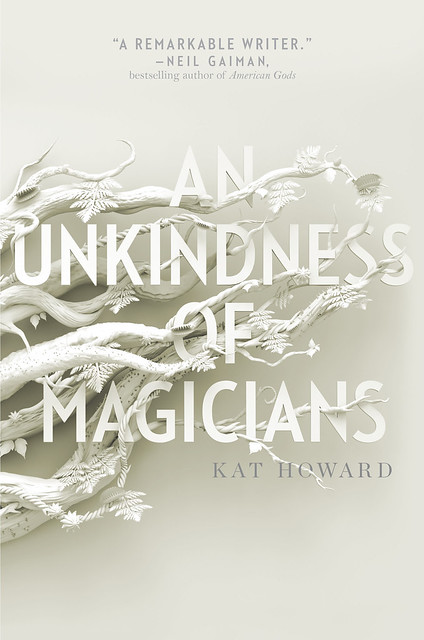 For An Unkindness of Magicians, author Kat Howard decided to go about things… well, just a little differently. She’s here to tell you why doing it that way made sense for her novel.

This is a book that began with an ending.

It’s a word so archaic that I had to add it to my computer’s dictionary. I don’t even precisely remember where I first read it – maybe it flashed across my twitter stream  or maybe it popped into my inbox as a word-a-day offering. It’s a kind of disenchantment, done by a countercharm. Magic to end magic. I read that definition, and my hair stood on end, and I knew I had a book. A book about an ending of magic.

Except a book isn’t only an ending. I needed a why: why would magic be ending? I thought about what I knew about magic, about what made magic real and true, about what made magic matter. Magic, I thought, should take work. It should have consequences. To paraphrase Peter S. Beagle’s The Last Unicorn, magic should not be something you can get by tearing out someone else’s liver.

An Unkindness of Magicians is about what happens when magic is paid for with someone else’s liver.

And not just by one person. By an entire society, for multiple generations.

There is, of course, more to it than that, because even with the why, An Unkindness of Magicians is about more than simply an ending of magic, more than the abomination of magic that led up to the events of the story. People tend to not be happy when their power is taken away, particularly when they see that power as something they deserve.

An Unkindness of Magicians is about many kinds of endings:

And yes, about an ending of magic.