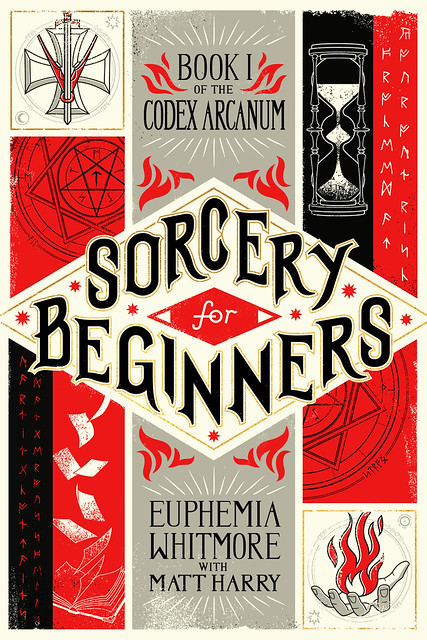 When Matt Harry set down to write his novel Sorcery for Beginners, he undertook a journey that, as it turns out, had a parallel in the book he was writing. Here he is to tell you about that journey.

This whole thing started because of Einstein.

I know the date exactly, because I take notes on such things. It was 21 April, 2013. I was looking for a little light reading material during my lunch. I scanned the bookshelf, picking up my wife’s copy of The Complete Idiot’s Guide to Understanding Einstein. By the time I finished my sandwich, I decided I must somehow be more than a complete idiot. Even with the helpful explanations and jokey sidebars, I still couldn’t grasp the Theory of Relativity.

But flipping through the book gave me an idea. If they can explain something as difficult as theoretical physics to people, I mused, what if they could do the same thing for something impossible? Something that doesn’t exist, like Monster Hunting, or Time Travel, or Magic?

Magic. The concept hit me like a falling apple approaching the speed of light. Enchantments for Morons…Spell Casting for Dummies…okay, so the title doesn’t work yet, but a how-to guide that explains how to do magic, real magic? There’s something there.

I spent the next couple of days fleshing out the story — a lazy teenage protagonist whose parents had just divorced, a mysterious bookseller, a group of bullies tormenting our hero. I also changed the title to Sorcery for Beginners, realizing that ‘Dummies’ might not be the best way to address a potential audience. High on the fumes of a new idea, I pitched the concept to my then-agent—as a screenplay.

“Love it,” he said with the tooth-cracking enthusiasm only an agent can muster. “Great idea, fantastic, just one problem — no one’s buying spec screenplays right now. If you told me this was based on a book, it’d be an immediate sale, six figures easy. But since there’s no book …”

I was frustrated. I’d been repped in Hollywood for a few years at this point. I’d had a couple scripts optioned; an indie movie I wrote had been made and gotten distribution; I’d written projects for some big producers, but nothing had taken off. I was still working a day job and writing on nights and weekends. The time had come to try something new.

So it’d be an immediate sale if it was based on a book, huh? I fumed as I hacked my way back home through LA traffic. Guess I’ll just have to write Sorcery for Beginners as a book and sell it, then. Easy!

This wasn’t completely unknown territory for me. I had actually started as a prose writer, way back when I was a middle-grader myself. My first ‘novel,’ The Great Girl Chase, was written in seventh grade. The title alone should tell you how terrible it was.

Then I focused on plays for awhile, then journalism, then in my sophomore year at Ohio University I took a film analysis class and got hooked. For the next ten years I wrote screenplays and made movies. I had some minor success (see above), but when a good friend of mine got a three-book publishing deal, it inspired me to take up prose again.

I began outlining my first real novel in 2008. I thought it’d be fun to do something in the vein of the books I’d loved as a kid, like The Chronicles of Narnia and The Dark is Rising sequence. Unfortunately, while my finished novel had some cool details and world building, it ultimately wasn’t good enough to get me a lit agent.

But Sorcery would be different, I vowed to myself as my car crept past the Hollywood Bowl at 0.1 mph. I was a better writer now than I was five years ago, and I was more excited about this idea than I’d been about anything in a while. How hard could it be to crank out another book? I threw myself into it with the ferocity of a kirin, and two months later I had a first draft. I sent that off to lit agents, got multiple offers of representation, and a big publishing deal soon followed.

Just kidding. My first draft was only okay. And I had learned enough by that point to realize it was only okay. I sent it to my good friend, got notes, and I started to rewrite. I beefed up the secondary characters. I added more obstacles to the plot. Halfway through the third draft I realized it would be kind of fun if my story about kids finding a magical help guide was formatted like a help guide. That required adding about 15 thousand words of sidebars, spell pages, and fake magical history. Cue additional rewriting.

Somewhere during draft seven, I realized that what I was going through with this book was a perfect theme for the story. We all want things to be easy, but doing anything of value takes work. Owen, the main character, wants sorcery to fix everything in his life. But he needs to realize that only he can change his circumstances, and doing that takes effort. This led to more rewriting.

Finally, I had a draft I felt pretty good about. I queried agents and got a lot of good responses, even a couple offers of representation. Ultimately I went with Inkshares because the CEO Adam Gomolin really believed in this book and vowed to push it as hard as he could.

But even then, the work wasn’t done. My editor at Inkshares suggested increasing the presence of the bad guy Euclideans (who didn’t even have a name until the sixth draft). That required more rewriting, adding a few scenes, and putting a whole new chapter in the beginning. Even the captions for the illustrations went through some finessing. (I should stress here that all of this contributed to making a much better novel, and I’m incredibly grateful to everyone who helped me through the process.)

Now, four-and-a-half years, 11 drafts, many tossed pages later, my debut novel Sorcery for Beginners is complete. And I’ve learned the same lesson as Owen: that no matter how easy something seems, doing anything of value takes work.

Also, that Einstein was a pretty smart guy.