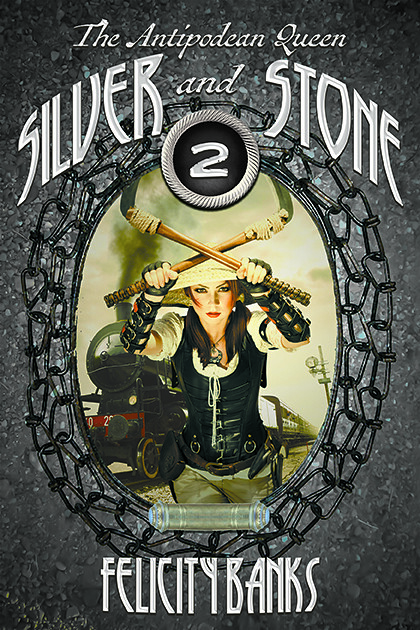 Writing alternate history is fun and interesting, but here’s another interesting thing: Every day, we’re making a history too. What happens when the latter crashes into the former? Author Felicity Banks has some thoughts on that and how it affects her new novel The Antipodean Queen.

That should probably make me fear for humanity, but it just makes me smile. We Australians often laugh at over-the-top depictions of our deadly animals and even deadlier landscapes. I’m a city girl myself, so I know how silly it all is.

Okay, so there was that one time my grandma killed a snake. And the kangaroos hopping around the major roads at night are a bit of a hazard. Sure, there’s that one playground I always check for brown snakes these days. The annual bushfires aren’t great, either. Yes, my backyard has a little bit of a red-back spider breeding program. And it’s a teensy bit creepy that huntsman spiders are so common that the ones living inside have a shared nickname (Fred).

In Australia, nature is constantly reminding us that humans aren’t as impressive as we like to think―and we love it.

I’m quite patriotic, for an Australian. Ever since Europeans invaded, Australian culture has been a curious mixture of British, American, and other cultures. Our manners are more straightforward, and our suspicion of authority runs deep. Most Australians are uneasy with national pride, and not just because it’s a favourite tool of racists. Sometimes we do awful things to try to keep ourselves safe from a perceived threat―and we know it.

A love for one’s country is a curious and complicated thing, and the more history I learn the more complicated it gets. How can I respect the unique prehistory of Australia when my university sprawls cheerfully over a sacred site? How can I be proud of my country when the white middle-class life I know was built on attempted genocide? How can I enjoy Australia’s excellent lamb when I know that flocks of imported sheep permanently devastated vast areas of once-productive land?

These are the questions that flutter around the edges of my writing, dipping into a half-sentence here or there as I write a story that looks like it’s all fun and fantasy.

Here’s the thing: I write with hope, and magic, and optimism. Sometimes it’s not easy, and sometimes it feels closer to outright lies than fiction. But if I can write something better than real life, I believe the power of my imagination can haul that version of Australia closer to reality. If I didn’t believe that, I couldn’t go on.

I had my Big Idea of writing Australian alternate history back in 2011, not knowing then that important parts of my history are only now coming to light. As I began to read more deeply about Australia’s colonial era―smiling sometimes, and crying often―I found a few things to be proud of. Part of Australia granted the right for women to vote in state elections in 1861. Back in 2011 I had a vague notion that the second book of the trilogy would be something to do with women’s suffrage. The question was how to make it relevant to modern readers. Surely any character who wanted to silence the political voice of half the population could only come across as cartoonishly evil.

Right now, in Australia, our government is risking the safety of thousands of vulnerable LGBTIQ people by making the entire population take an expensive and non-binding postal plebiscite on gay marriage, even though it’s already well established that the majority of Australians support equal rights. I’m bisexual but married to a man, and cushioned by the appearance of heterosexuality. In recent weeks even I have felt the sting of half-heard conversations, advertisements that would usually be classified as hate speech, and an email telling me that as a Christian I should vote ‘No’.

So here I am writing a fantastical version of history while being haunted by the uncomfortable knowledge that real-world history is still being written. I’m heartbroken over the real mistakes of both the past and the present, but I choose to believe that my country can grow to better deserve the love I give it.

Oh, and there’s a crocodile in the book too.