A couple weeks on, a brief follow-up to this piece, in which I noted how much 2017 was messing with my word count.

It turns out it was really useful for me to write that piece. Not necessarily because I’ve increased my writing speed since then — I’m still slogging away at a slower pace than I’ve done in previous years — but because, basically, in naming my problem I’ve lifted a fair amount of the psychic weight of it from my shoulders. I’m not kicking myself for writing slower right now, and as a result, the writing is easier. Which ironically means the writing is more regular, and because of that, there’s at least slightly more of it. Who knew.

I’d also like to acknowledge the folks who wrote me or linked in to the piece, saying, more or less “Yes I have been feeling the same thing I’m glad somebody finally said it.” One, you’re welcome and I’m glad the piece accomplished at least part of its intended effect of letting folks know they weren’t alone in their creative miasma at the moment. Two, your chiming in also helped me, because as much as I strongly suspected I wasn’t the only one in the spot I was in, getting actual confirmation of it was heartening. I was right! Alas! But the knowledge meant a bit of fellowship, and that made the burden a little easier to bear. Which made the little readjustments I’m making now easier to do. Thanks, folks.

(Mind you, I had some of my usual suspects out there pointing at me at going ha ha Scalzi has writer’s block, because they’re sad little dudes like that. While I could push my glasses up on my nose and say well, actually I was never blocked I was just writing slower, which you would know if you could read, in point of fact they read perfectly well, they just have a pathological need to see me as a failure. And to be honest, that cheers me up a little too. I like enraging these sad little dudes so much just by existing that they have to create voodoo doll versions of me to stab stab stab stab. They want to be enraged, and it literally requires no effort from me to oblige them. Keep at it, sad little dudes! It’s good for you to stay busy.)

And now, back to it.

The first review of Don’t Live For Your Obituary is out and it’s a good one! The full review is here, but the pull quote is thus:

“[Scalzi] writes accessibly and so commonsensically that this book should appeal to writers in all disciplines.”

Yes! Yes it should!

Remember that Obituary will be out in December (i.e., in time for holiday gift-giving) and that you can pre-order the signed, limited hardcover edition directly from the lovely folks at Subterranean Press. It will also be available in eBook format.

Speaking of eBooks, Subterranean is now directly selling ebooks, so you can get them directly from the publisher. The first batch of eBooks available through SubPress’ story includes The Dispatcher. Here’s the full list of the first set of eBooks. So while you’re pre-ordering the hardcover of Obituary, you can pick up the eBook of The Dispatcher to keep you company. Convenient!

So, nine years ago this week, I switched the Whatever blog over to the WordPress VIP service, after months of access difficulties with both previous blogging software and previous providers. And in the nine years since switching over to WP VIP, the amount of time the site’s been down can be counted in minutes, and on my hands. That’s some pretty great uptime. Since the time I switched over, WordPress has also expanded the types of hosting services it offers bloggers and sites, so even if you don’t need the full VIP service, there’s probably a level of service that could work for you, and your site’s needs.

In almost a decade, WordPress has never asked me to make an endorsement of their software or services, but every year near the anniversary of my switch I make an endorsement anyway. I do it for the simple reason that WordPress just plain works, and it works for me, and I’ve never regretted using their service or software. There’s not much in the world I can say that about. If you’re looking to create and host your own site, I hope you’ll give WordPress a look. I’m one happy customer. 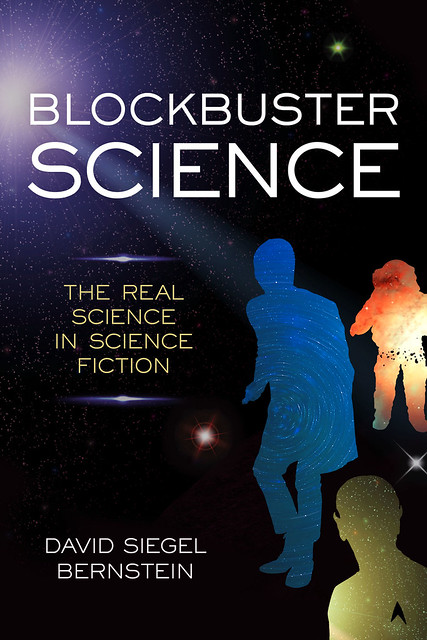 The phrase “science fiction” has two relevant parts to it. In Blockbuster Science, author David Siegel Bernstein delves into the science of the fiction, and separates out the fantasy of the genre from the fact. Here he is to tell you process of his exploration.

Science fiction is driven by fear or hope, while science is driven by necessity or curiosity. The overlap between their motivations is huge. Science fiction has always had the power to inspire scientific and technological breakthroughs that change our world. Companies used words like “robot” and “android” after they were popularized in fiction, and today’s STEM experts often say they were first inspired by stories they read when they were young.

To me, what could be a more fun way to explore the world of science than through its use—accurately or fantastically—in science fiction entertainment: movies, books, and TV shows? This question is the big idea behind Blockbuster Science: The Real Science in Science Fiction. So as you may imagine, this book was born from my geeking love for both science and science fiction. This made it incredibly fun to write. How could it not be? I got to explain the science behind popular narrative concepts like time travel, AI, genetic mutation, asteroids, cyborgs, alien invasion, the zombie apocalypse, and more. I also created lists of songs (consider it science and science fiction mood music), movies, and books that highlight chapter topics.

The entire experience of writing this book was different from my fiction writing, where I’m mostly locked inside my head. Blockbuster Science was much more an external journey. I scoured research journals, textbooks, newspapers, and magazines to learn what is old news, where cutting edge research is heading, and new outcomes possible from widely accepted theories. I made my best attempt to explain key scientific principles in jargon-free, easy-to-understand narratives. For the creators of hard-science fiction, I hope this book draws the boundaries that cannot be broken and teases those that are begging to be broken with the right what-if.

I like questions—even ones for which we have no answers, yet. I made sure to season in a lot of question marks throughout each chapter. A lot of recent discoveries have led to questions that scientists never thought to ask before. Curiosity about our world drives fiction authors and filmmakers to explore the realm of possibility. Besides, isn’t science itself all about asking questions? Questions such as, what caused the big bang? Consider how cause comes before effect. In the standard big bang theory, as described in the book, there was no before (i.e., time) before the big bang. Think of searching for the cause of the big bang as being like searching for north while standing at the North Pole. Don’t worry, I address on a few of the newer theories that may provide you with a more satisfying theoretical answer to that question.

Every chapter of Blockbuster Science covers a different topic. Time and space, which are so interwoven that they are cleverly coupled under the moniker spacetime, and quantum mechanics start the learning process. The weirdness of string theory, the origin story called the big bang, parallel worlds, black holes, evolution and biology provide truckloads of building blocks for fictional worlds. Interconnectivity, AI, extraterrestrial life, interstellar communication, energy sources and rocketry buttress those building blocks. Substance, materials, invisibility, the holographic universe and technology spin up more possibilities until everything ends in the chapter that covers the end of everything (the sun, the universe…everything). Is it really the end? I offer up a few “workarounds” based on the science described throughout the book, but I warn you, it will sound like science fiction.

Blockbuster Science isn’t only for science fiction fans who want to know more about the science behind the plot. This book is for the curious—anyone who wants to know more about the natural world and the universe of which they are a part. It’s for the science geek in everyone, especially those who smirk at jokes such as: Schrödinger’s cat walks into a bar, and doesn’t. My kind of people!