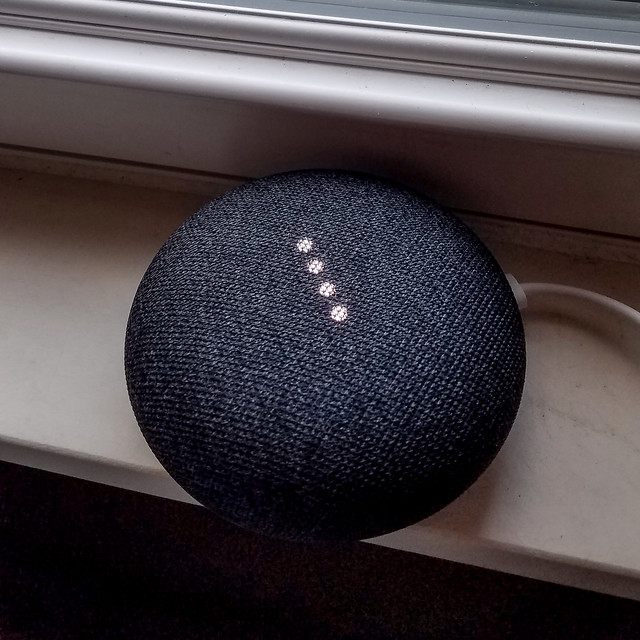 I had a Google Home Mini sent to the house while I was away and it was here for me when I came home. I was curious to try it out; I have a full-sized Google Home, which I like, but possibly not enough to spend $130 for another. I wanted to see if the $50 Mini would serve my purposes.

It turns out it does. I mostly use Google Home (and the Amazon Echo, which I also have) mostly to play music and to answer questions I’m too lazy to type into a search bar, and the Google Home Mini does that as well as the Google Home. The reviews of the Mini that I saw warned that the speaker in the Mini is not that impressive, and I suppose from a technical perspective that might be the case. But it’s plenty loud when it needs to be and is more than sufficient for listening to music at my desk or responding to my queries. It doesn’t have a lot of bass, but otherwise, it’s perfectly fine.

Functionally you can raise and lower music volume by touching either side of it, and you can keep the thing from listening to you by switching the microphone off in the back, and that’s it for functionality — there was the ability activate it or pause music by touching the top, but apparently in some Minis a bug caused it to endlessly listen (and send that data to Google), so Google disabled that function permanently. Since you can get it to pause music and/or respond to queries by saying “Hey, Google,” and that’s kind of why you get one of these things in the first place, I don’t think this is a huge loss.

Size-wise, the thing is the size of a hamburger bun or a donut and relatively unobtrusive. Mine is “Charcoal Gray” (effectively black) but there are other colors as well. I have mine placed next to my first-gen Amazon Echo on my desk, which makes for an amusing visual contrast: A squat, fabric-covered puck next to a tall metallic cylinder. I’ve found having both on the desk is actually kind of useful, since I can have one play music while I use the other one to answer questions. They both have different hailing phrases so they don’t get confused about to whom I am speaking (don’t, however, place your Mini on top of your Echo; doing so confuses the Echo’s microphones).

Now that I have Amazon and Google smart speakers, you might ask if I have thoughts to which company does a better job at the virtual assistant thing and which I would recommend over the other. My answer is that at this point it’s kind of a wash generally and a lot of it will depend on what you use the thing for, which electronic ecosystem you’re invested in and, bluntly, who you want to have all of your electronic information. I would give the edge to Amazon if you’ve got Kindles and Fires and a Prime subscription and want to buy things frictionlessly, and the edge to Google if you’re already neck deep into Gmail and Android and Chrome dongles and computers. I do find Google Assistant slightly smarter than Alexa, but both are plenty smart enough for most things and the distance between the two only shows on very picky queries. Google’s aesthetic is friendlier, but Amazon’s is hipper. Honestly, flip a coin. You’ll probably be fine either way.

That said, if you are well into the Google system and like these smart speakers and aren’t excessively paranoid about giving a massive multinational corporation a listening post in your home 24/7 (they say they’re not listening unless you tell them to listen, and I believe them, but they surely could listen all they wanted, that’s just a software update), the Mini does the trick and is pretty cheap at $50. I’m enjoying mine so far.