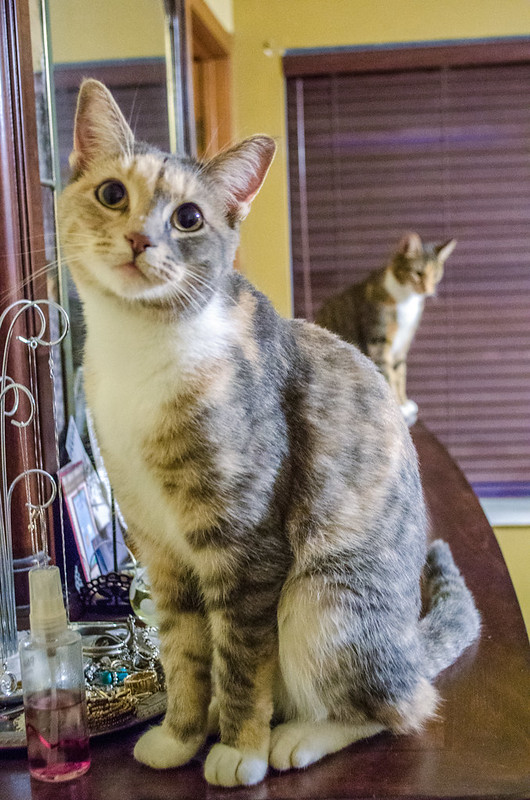 Two years ago on this date Krissy, Athena and I went over to a neighbor of my mother-in-law’s with the intent of getting a kitten from a litter his cat had birthed. We ended up getting two, since they were small and also the kittens had clear affection for each other. The kittens became the Scamperbeasts, famed of blog and Twitter, and individually Sugar (the gray one) and Spice (the orange one).

It doesn’t particularly feel like two years have gone by, I think in no small part because the Scamperbeasts are relatively small adult cats, smaller than Zeus is, or Lopsided Cat or even Ghlaghghee were, so to me at least they still seem kittenish, or at least adolescent. They still live up to their names — they get the zoomies at unfortunately early hours and will suddenly bolt into and out of rooms for no discernible reason at all. They haven’t slowed down a bit.

They do have distinct personalities. Sugar is the affectionate one, who daily parks herself across my chest while I’m trying to, you know, write, and who loves to be held and petted, but tends to be shy with strangers. Spice, on the other hand, is friends with everyone but not a cuddler, and has decided it is her duty to show me her butt every morning like a furry alarm clock. Both are very friendly with Daisy, who mothers them.

They are also both expert mousers, killing a large number of rodents, especially this time of year, when the agricultural fields around us are harvested and the various creatures who lived in and near them start eyeing our house as a possible place of warmth and food. This is where I remind people that I live in a rural part of the county and all our cats are working animals as well as pets, and pest control is a real thing that happens.

But they certainly are cute, too, which is how the internet knows them and appreciates them. We like that about them, too. It’s been a good two years with the Scamperbeasts and we look forward to more of them. We’re glad we brought them home with us. They seem glad to be here.

24 thoughts on “Two Years of Scamperbeastery”