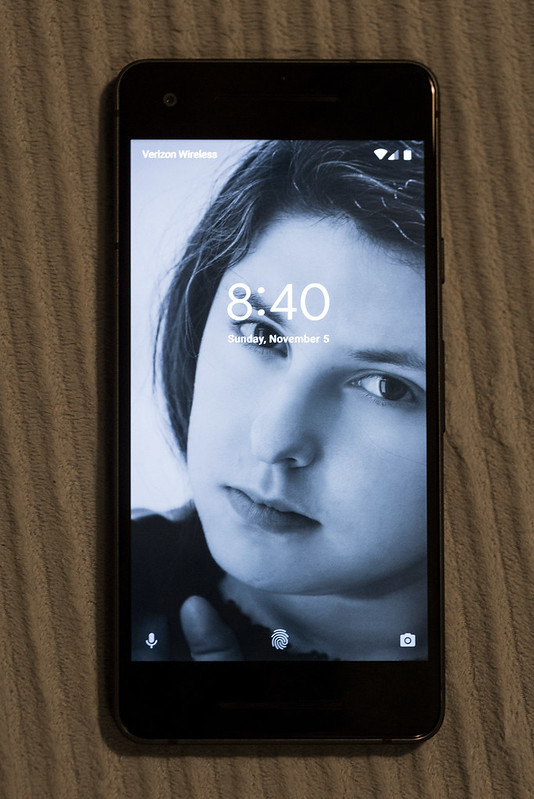 My Samsung Galaxy S7 has been getting the crashies for the last couple of months, so that (and the persistent “new tech” itch I have) was a signal for me to move on to a new phone. I considered one of the Galaxy 8s, or the Note 8, but I’m not sold on the 18:9 screen ratio — not the least because I’m annoyed they don’t just say 2:1 — and also they’re beginning to get goofy big. Both of these problems also plague the Google Pixel 2XL, which also has various screen issues. The Pixel 2, on the other hand, is nicely sized for someone of my particular hand width, and largely has the same innards as the Pixel 2XL, including what’s consistently now considered the best cell phone camera out there, with the ganky screen. So I’m giving it a shot.

The (very) early impression, a few hours in: It’s pretty and speedy and is I think probably the smallest phone I’ve had for a while. I didn’t think I’d get a smaller phone that the S7 Edge, but so far it’s not a problem, and is easier to palm and play with. The Pixels have this thing where you squeeze the sides and Google Assistant pops up; I’ve played with it a little and it seems more like a novelty than anything else, but we’ll see where that goes. It’s weird to squeeze a phone, though, and the haptic feedback makes it feel like it’s giving way and you’re breaking it a little (you’re not).

The Pixels also come with Android Oreo, which is a selling point but which is not (yet) hugely different than the Android Nougat experience. There’s no headphone jack but it comes with a dongle, which is fine. There are two reasonable nice front facing speakers on the thing, which are also nice. This occasions bezels on the top and bottom of the phone, which some reviewers found aesthetically displeasing, but which I don’t really care about. The screen is bright and more than pixel-dense enough. The camera, as advertised, is very good.

Got a new phone and as required by law, the first picture I took with it was of a cat (and before you ask, it's a Pixel 2). pic.twitter.com/BvvFm5h5jg

Overall I’m not displeased with my purchase. I’m about to go on a business trip so we’ll see how it performs then. If I have any major issues with it I’ll let you know.