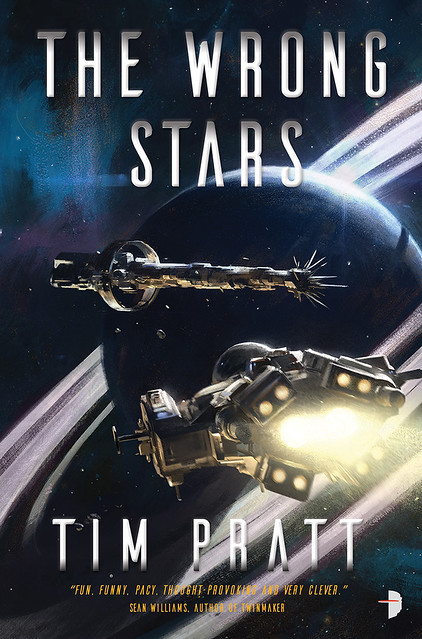 When you get known for writing one thing, it can be a blessing and a curse — a blessing that you have an audience for your wares, but a curse in that you can sometimes feel like you’ve written yourself into a corner. Sometimes making a change in those cases requires a leap of faith. Tim Pratt has made that leap with The Wrong Stars, and today he’s going to talk you through that leap and what came after.

Insofar as I’m known at all, I’m known as a fantasy writer. I’ve published an eleven-book urban fantasy series, written a bunch of sword and sorcery, and done zillions of fantasy short stories. When I’ve dabbled in science fiction it’s mostly been set in the modern era – stories about people traversing the multiverse, a little bit of time travel, weird alien visitors, and the like.

I grew up on widescreen space operatic galaxy-far-away sorts of science fiction, though, from Star Trek to Star Wars to Edmond Hamilton’s Star Wolf to Fred Saberhagen’s Berserkers, and I never lost my taste for the stuff. As an adult I devoured Iain M. Banks’s Culture novels and Joanna Russ’s The Two of Them and Lois McMaster Bujold’s Vorkosigan Saga and M. John Harrison’s Kefahuchi Tract and Peter Watts’s Blindsight, not to mention shows like Firefly and Battlestar Galactica and GalaxyQuest and The Expanse, video games like the Dead Space series, and more.

I always held the desire to write a space opera series deep in my secret heart, but that kind of science fiction is so different from my usual fantasy work, and I hesitated. Could I write something so far outside my wheelhouse? Would people come with me if I jumped genres that way?

A couple of years ago, as I began winding down my Marla Mason urban fantasy series after over a dozen years, I asked myself: what should my next big project be? What do I want to be the centerpiece of the next decade of my writing life, if all goes well?

It seemed like an important decision. I turned 40 last year. I’ve been writing professionally for 15 years. I am probably in the fullness of my power as a novelist, such as it is. If not now, when? So I decided it was space opera time.

I wanted to explore space opera themes I love, too: especially what it means to be human in a universe of extreme body modification, intelligent aliens, and far-flung colony worlds. What are the essential things that bind us together as a culture, or even a species, when that culture is spread throughout the galaxy, when we’re changing our bodies in fundamental ways, and when our common experiences have become increasingly uncommon?

I began to sketch out a world six centuries in our future: a network of colony worlds connected by wormhole gates and organized into various corporate, religious, and utopian polities, with a place for outsiders of every variety. There are weird aliens, a species we call “Liars,” who tell contradictory and sometimes patently false stories about themselves and the nature of the universe, but also trade us useful technology. I wanted a vast, looming background threat for my characters to gradually discover and grapple with throughout the series, and created the Axiom — an undiscovered ancient alien race, engaged in long-term universe-altering plans, capable of crushing humanity utterly if they ever noticed our existence and found us inconvenient.

I had a world worth exploring, but it wasn’t enough to put all my influences together to create an enjoyable sandbox. The beating heart of my stories is always the characters, and once I had a sense of the kind of weird, complicated future I wanted to play with, I started creating people who could thrive and strive and fight and suffer in such a world.

My novel The Wrong Stars is about the crew of the White Raven, skip tracers and freight haulers and wreck salvagers operating out on the fringes of our solar system. The crew is captain Callie Machedo, who probably has a heart under her no-nonsense exterior, though it would take a plasma torch to cut your way through; doleful XO and ship’s doctor (and adherent of a mind-altering-chemical-based mystery religion), Stephen; their engineer, a cyborg advocate of radical self-improvement, Ashok; pilot and navigator Drake and Janice, who had a run-in with a bizarre sect of Liars and came out forever changed; the lovelorn ship’s AI, Shall; and the catalyst for the novel’s action, Doctor Elena Oh, cryosleep refugee from the 22nd century, whom the crew discovers in the wreck of a seed-ship launched 500 years earlier.

When they find Elena’s vessel inexplicably floating on the edge of our solar system instead of light-years away, and hear Elena’s harrowing tale of why she’s the only human left on board, the crew discovers a terrible threat to all intelligent life in the galaxy, and for various violent reasons, they’re the only one who can stop it. The Wrong Stars is about dealing with that immediate threat… and the next books in the series, The Dreaming Stars and The Forbidden Stars, will explore more of the endangered universe as the gravity of the threat posed by the Axiom becomes clear.

I love these people. I hope you will, too. I get to write at least three books about them, so far. With luck, there will be more, because there’s a great big universe to explore, full of terrifying wonders and wonderful terrors.

I hope you’ll follow me out into the stars. It turns out I really like it here.