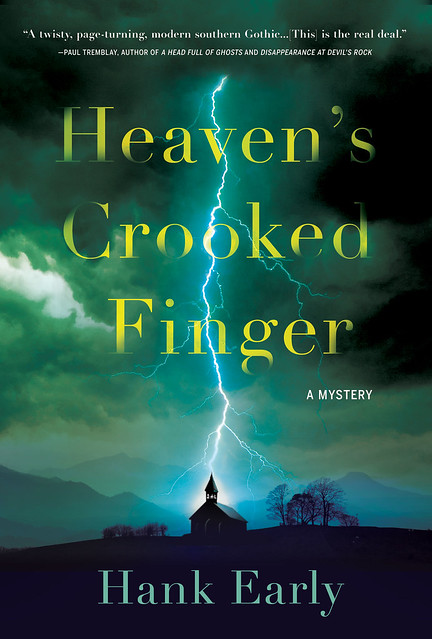 Hello, folks. This fine day, author Hank Early would like to talk to about Hell. And the End Times. And Heaven’s Crooked Finger. The last of these being his new novel. But the other two of which had some influence on its writing.

When I was eleven, I buried a large, club-like tree branch out on the sixty-four acres my grandmother owned in rural North Georgia. I was with my cousin and we’d spent the day discussing the Book of Revelation and how long we might have left until Jesus came back. We knew the rapture was going to happen sooner than later, and we knew before it happened, things were going to get really, really ugly. Ugly enough that the modern world would collapse, and we’d have to turn to the land, to the old ways for survival. Which was why I was burying the stick. One day—probably in just a few short years—my eleven-year-old self reasoned, I’d need it as a last-ditch way to fend off the hordes of unbelievers who would seek to pervert me.

I wrote my first Earl Marcus novel, Heaven’s Crooked Finger, without thinking even one time of that buried stick. I only remembered it today as I sat down to write this blog post. Yet, I believe it’s a memory that speaks to the impetus and heart of the novel.

I grew up believing in all manner of dread-inspiring events—the rapture, Armageddon, the coming anti-Christ, and the inevitable mark of the beast. I also believed in the physical reality of hell.

My grandmother’s preacher saw to that.

Most of the preacher’s words are lost to me today, all except one: hell. I remember that word the way a cancer survivor remembers chemotherapy, the way a recovering alcoholic remembers morning hangovers.

Hell, hell, hell, hell, like a bludgeon. Like a harbinger. Or maybe just a slow wind, the kind that whispers words of terror as it rattles the trees.

The preacher must have said that word a hundred times that Sunday, punctuating each utterance by slamming his foot down on the stage hard enough to splinter wood. I don’t pretend to know if he believed in the hell he screamed about or if he simply liked the idea of such a place. What I do know was I believed in it. Like the rapture, I’d learned to believe in hell. I’d learned to believe in it so fully, I would later spend nights lying awake in bed worrying—not about the existential questions, but instead about the existential answers, those that I’d come to see as irrefutable.

Those answers terrified me. Questioning did little good. Any number of true believers in my extended family were quick to point out the obvious signs:

“The blood moon over there. That’s an omen. The Lord is coming back soon.”

“See this symbol on this toothpaste? That’s the mark of the beast.”

“If the Lord would have returned in the middle of our argument, we’d have both gone to hell.”

“Better get right with the Lord. Better not backslide like (fill in the blank with some distant relative’s name).”

Most of these quotes can be attributed to my grandmother, one of the women to whom I dedicated Heaven’s Crooked Finger.

I can see you’re perplexed. Shouldn’t I feel animosity toward the woman who made me fear backsliding as much as I feared death? There’s a long essay right there, but the short answer is no.

Like my novel’s protagonist, Earl Marcus, I went on my own journey away from fundamentalism and fear. Mine was far less dramatic than the one described in Heaven’s Crooked Finger, but it was no less enlightening. It taught me something crucial, something that all the foot-stomping, tongue-speaking, and end-of-days-prophesying never could. It taught me to forgive. Not only to forgive, but to understand.

Until you’re raised in it, until you’ve sat through those tense and fearful moments as a young child while the world and its foundations shook all around you and until you’ve waited with bated breath, absolutely sure that the skies would part at any moment and when they did, you’d be left behind with all the sinners because you knew somewhere deep inside that this wasn’t working for you, that you wanted no part of this damnation, these convulsions, this kingdom built with bricks of fear and guilt and, yes, even some kind of perverted love. No, until you’ve felt that, and more importantly until you’ve feared that, you can’t understand how hard it is to step away, to turn your back on it all, to become the backslider that you’d been warned about so many times.

Before she was the person who made me fear hell and plan for the imminent rapture, Granny was the woman who loved me unconditionally, the woman, who despite what the scriptures might say about a man being the leader of his household, actually showed me how a woman could do anything a man could do and do it better. Later, when the fear of her faith had begun to lose some of its power over me, she was also the woman who, at 80, left her rural mountain home to move in with me and my mother and father, both of whom were dying of cancer. She took care of us all, and I saw God in that act bigger and brighter and more real than I ever saw Him before. So, there’s the messy truth about Granny, and maybe about us all. And that too, is the big idea of the Heaven’s Crooked Finger. In the end, people are damned complicated, and even the ones that would condemn us to a fiery hell in one breath might love us with the same heat and passion in the next.

Even so, I contend the scars inflicted by our own families are the hardest to overcome, not only because of the ambiguity behind them (the perpetrators nearly always love their victims, sometimes fiercely) but also because of the frequency and ubiquity of the assaults. To walk away from a faith he couldn’t abide, Earl also had to walk away from his family. His home. Heaven’s Crooked Finger tells the story of a return home and a struggle to deal with not only the fallout, but the enduring mystery of that faith and what, if any, truth might be gleaned from it. It’s a mystery that asks far more questions than it answers: Why do we hurt the ones we love? Why, in our most genuine efforts to rise above this earthbound misery, do we saddle our children with such heavy burdens? What happens to our communities when those burdens are shrugged off at last, and the belief in heaven and hell becomes secondary to the love that binds us together in the first place?

You’ll have to decide for yourself how well the novel addresses these issues. The only thing I know for sure was that it was cathartic for me to write. As was this essay.

The best thing to come of it all happened when I was talking to my wife while taking a writing break recently, many of these same issues still fresh on my mind. My fifteen-year-old daughter overheard our conversation and piped up with a question that warms my heart: