Full Review of the Pixel 2 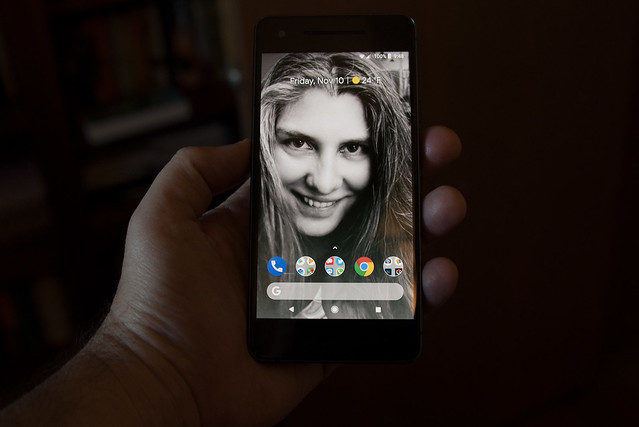 After a week and a trip to Minneapolis where I used a lot of its functions, I can now say that I like my new Pixel 2 a whole lot. Let me count some of the ways.

1. Ergonomically I think it’s a winner for me. My last few phones were on the larger size and while the Pixel 2 isn’t tiny (it’s a 5-inch screen), it’s well-proportioned for my hand and it’s reminded me it’s nice not to have to use two hands to do stuff with the phone, and to be able to reach every part of the screen with one’s thumb. I’m sure I’ll succumb to a bigger phone/screen in the future but for now I’m enjoying it.

2. The textured aluminum back to the phone feels solid. It looks like plastic thanks to the texture, but doesn’t feel plastic-y (to me, anyway) and sets on the table with a small yet satisfying thunk. Also, the fingerprint dimple is well-placed and(!) has this feature where swiping down on it pulls down the notification drawer so you can look at it quickly (swiping back up puts it away). This is kind of genius and I use it all the time.

3. The two speakers up front are nice and loud and are positioned so I don’t block them when I hold my phone, which was a problem with the S7 Edge. As I’ve noted before, some reviewers complained that the bezels surrounding the speakers make the phone look blocky, but in practice I’ve found that I simply don’t care; it doesn’t really make a difference to me aesthetically — the phone still looks perfectly good — and doesn’t do anything negative with regard to its use. It’s fine.

5. The camera is really nice and it does a nifty thing (which I know iPhones do as well), where it does a second-long video capture around the picture, both to give the end photo more information to pull from, and, I guess, just in case you want a one second video. It eats up a larger amount of space than the picture might otherwise (it offers to back up to the cloud to help with that), but it’s still fun. The camera’s portrait mode also tries to fake depth by blurring backgrounds, which I found okay but finicky (a picture with my glasses on the top of my head kept the lenses in focus but blurred the arms). But generally I’ve been pleased with it.

6. The battery life seems to be very solid, which I chalk up to it being a brand new phone but also because the phone runs Android Oreo, which I understand throttles back apps when they’re in the background. It seems to be working. The only times I found the phone really drawing down were when I was in a dead spot and it was searching for a network to connect to.

7. Speaking of Android Oreo, it seems nicely functional, although most of the changes seem to be under the hood. The one major thing I’ve noticed is it does a “picture in picture” thing with YouTube and Maps, laying a tiny version of the screen on top of other apps when you bring them up. This is useful with Maps, less so in my opinion with YouTube, and in both cases the mini-screen is easily dismissed. It’s nice to have the most up-to-date Android experience, however, and Google’s committed to updating the OS for the next three years, i.e., longer probably than I will have the phone in any event.

8. It’s very speedy, thanks to four gigs of RAM, and obviously very well integrated into Google’s ecosystem, which works fine for me, as I am well integrated into Google’s ecosystem, too, for all the good, bad and existentially disquieting things that means these days. Also, and this is minor but actual thing, its alert tones (or the ones I use, anyway ) are pleasing and not at all obnoxious.

9. Oh, and: Google Assistant via squeezing the phone’s sides? Sure, why not. At this point it’s still not 100% intuitive and GA still has a ways to go (even if it’s better than Siri or Bixby) to be truly useful, but the squeeze function is just goofy enough to give the phone a bit of a science fictional feel.

What things don’t I love?

1. There’s absolutely no reason this phone couldn’t have had a headphone jack as far as I can tell. Doing the dongle isn’t horrible (aside from the whole “you must choose between charging and listening” thing) and the sound from my earphones is fine, but yeah, this really just is a decision to try to get you to buy bluetooth headphones, isn’t it.

2. Some fiddly setting bits that I have yet to figure out fully, like the “do not disturb” function, which seems generally inferior to just turning the phone to “vibrate” for alerts. This may be me simply not investigating more fully.

I will say that generally speaking it seems to me the Pixel 2 is getting caught in the undertow of negative press regarding its larger sibling the Pixel 2XL, which has a problematic screen, especially for something that costs close to $1,000. The 2XL was meant to be the marquee device, with the Pixel 2 being the more affordable also-ran. But inasmuch as the only substantial difference between the two is their size and the screen resolution (and a few hundred dollars in price), if you wanted the most recent Pixel/Android Oreo experience and are okay with a hand-sized phone rather than a tablet-sized one, I can happily suggest the Pixel 2. I don’t think I’ve been this generally pleased with a phone in a while.