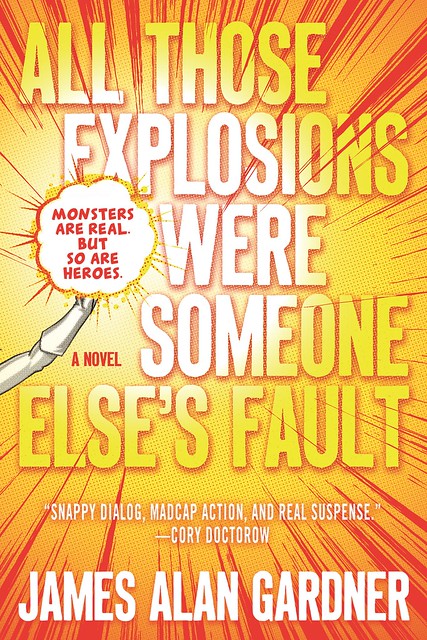 I’ll start by saying James Alan Gardner’s new novel has my favorite book title of the year. But, of course there’s more going on in All Those Explosions Were Someone Else’s Fault than a great title. Gardner’s here to tell you about a world of super beings and what having a world full of them means for those beings, and everybody else.

I have loved superheroes since I was seven years old and laid out all my comic books on the front sidewalk, so that my friends and I could admire how many there were. It was one of the few times in my life when I’ve made what anthropologists might call a “status display”. I don’t remember how many comics I actually had at that time, but probably less than twenty. On the other hand, AVENGERS #1 was part of the collection, so what I lacked in quantity, I made up for with quality.

At any rate, I’ve been buying and reading comics since the early days of the Silver Age. They were my gateway into science fiction, fantasy, and geekdom; they taught me about science, myth and morality; they demonstrated how to tell stories, and why stories were important.

Perhaps most importantly, the letter columns in the back of comic books made me aware that these stories didn’t miraculously appear out of nowhere. The stories were created by specific people who essentially just made stuff up. If the creators chose to do A rather than B, it wasn’t because A was true and B was false. It was simply because they thought A was more interesting than B. They charted their course by what they believed would appeal to readers, not by fitting the story to events that actually happened.

This revelation put me on the path to becoming a writer too. However, it was years before I decided to write a superhero book. I did so after I’d published a number of science fiction books, but in a period when my work wasn’t selling any more. Because doing the old stuff looked like a dead end, I asked myself what I’d rather be writing instead…and the answer was superheroes.

They’re super and they’re heroes. What else do you need?

I couldn’t set the book in any of the well-known superhero universes—I didn’t want to make the acquaintance of lawyers from DC, Marvel, Image, etc. So I had to invent my own universe, which suited me just fine. All I had to do was bear in mind the Big Idea of superheroes: they’re super and they’re heroes.

The “super” part was straightforward…but what is a hero these days? What makes someone heroic? Not just beating up criminals. Surely a hero should aim higher: fighting larger injustices. But many of the injustices we face are systemic, not just the deeds of individuals. Could I find some way to dramatize that, while still allowing space for super-ness (i.e. explosions, fisticuffs, and firefights)?

I could. I designed a world where the people in power were clearly a problem. I didn’t want them to be unambiguously evil—that’s too simplistic and would make moral choices too easy. On the other hand, I wanted the people at the top to be enough of a threat that the world would need superheroes.

So here’s the set-up I created for All Those Explosions Were Someone Else’s Fault. In 1982 (not coincidentally the Reagan years), vampires, werewolves and the like finally ask, “Why are we being so secretive? We’re sitting on a marketable asset.” They offer to make any human into a Darkling like themselves in exchange for ten million dollars. Fast-forward a few decades, and virtually everyone in positions of power around the world are Darklings. Supposedly, they all obey the law—no killing or using supernatural powers for nefarious purposes—but let’s just say there are suspicions of covert misdeeds.

Then, in 2001, superheroes show up…almost as if Fate decided that a counterbalance was needed. Unlike the rich buying their place in the Darkness, any old schlub may become a superhero. All you have to do is touch a glowing meteor, fall in a vat of weird chemicals, or get bitten by a radioactive spider. Heck, you might just be born that way, and discover what you are sometime in your teens.

So in this world, the 1% are Darklings and the 99% are protected by superheroes. It’s a situation guaranteed to create conflicts, but neither side is certain to be right or wrong. Super-folk (generally called Sparks) are ordinary people from all walks of life; they aren’t always good guys, any more than the Darklings are 100% bad.

Once I had this background, all I had to do was write a story in it. Hey, no problem. But again, the Big Idea applies. Super. Heroes. I wanted my lead characters to be truly heroic. Of course, they’d have flaws, but their hearts had to be in the right place. I didn’t want antiheroes; I wanted smart decent people whom I’d care about.

I also wanted heroes who represented the 99% in all its wondrous variety, as opposed to the relative monoculture of the 1%. So I came up with a diverse team of four university students who gain superpowers in a classic lab accident, and who find themselves thrust immediately into dealing with a Darkling conspiracy. The students are each heroic in their own distinctive way. Over the course of a four-book series, I hope to have fun exploring those different versions of heroism…

…while also blowing a lot of stuff up. Because the “super” part is important too. Flashy fights and excitement. A rationale for costumes and masks. Banter. Many jokes. The best of what comics can be.

Over the past few years, more and more superhero books are appearing on the shelves. Some are re-examinations of the genre, asking serious questions about what superhero fantasies say about our culture. Fair enough…but there’s also a place for books that glory in the four-color spectacle.

That’s what I was going for: superness and heroism. I hope the two can still bring the fun.