Yes! That overly descriptive headline says it all! The Collapsing Empire is one of ten Science Fiction books to make it to the final round of the Good Reads Choice Awards in the science fiction category, and if you are so inclined, you may vote for it at the following link:

Alternately, if you head over there and fine another book amongst the finalists that you liked better, go ahead and vote for it. Seriously, vote for the one you like best. I mean, I’d love to win the Goodreads Choice Award — I’ve not won it before — but not by stuffing the ballot box. Vote for what you like! That’s the way it works!

Also you can vote in all the other categories as well, not just science fiction. Go wild with your voting, people.

In any event, it’s lovely to have Empire a finalist. Thanks, folks. I’m glad the book is finding readers, and they’re finding it enjoyable. 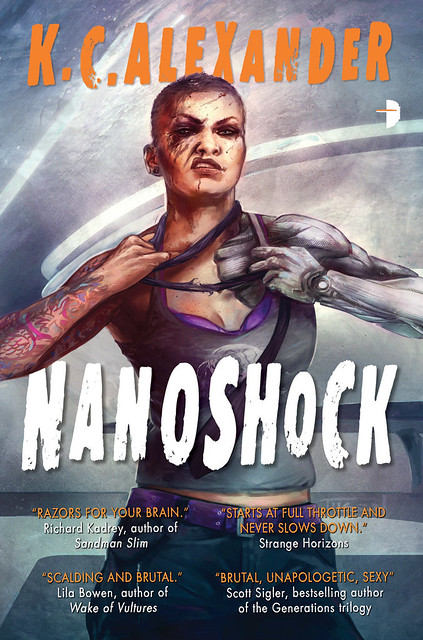 Books can take a lot out of you as a writer. And sometimes, as K.C. Alexander explains for Nanoshock, you go through a lot to get to the end of them.

So here we are, you and I. Back again some year and change later. Last time, I talked about Necrotech, and how writing it inspired me to come out genderqueer—all challenge and angry and defiant.

I chose the Big Idea to do it then because the rage of being taught I was not enough had fueled 110,000 words. At that point…how could I avoid the truth when it was repeatedly jabbing me in the brain? With an ice pick. The Ice Pick of Truth, as it turned out.

And another ice pick for the brain.

I got drunk to write this. This will inevitably be the title of my memoirs, but until then, we have the Big Idea. And Nanoshock, Riko’s next installment, and probably the hardest thing I’d ever had to (wanted to) write.

Did you know that I was a year and some change late on this book, too? Maybe a mild exaggeration… but close enough. My editors at Angry Robot Books were extremely, overwhelmingly supportive, and my agent bent over backwards to keep me reassured, but I was late, late, late. The White Rabbit fucking gave up on me, I was so damn late.

Did I mention I got drunk to write this?

You can laugh. It’s totally okay.

Nanoshock’s Riko is an asskicker, but those who live by the ass die by the… wait. Let me start over. Riko is an asskicker, but those who are violent only beget violence, and so she spends much of the previous book bloody. With her memories savaged and her reputation in tatters, Riko’s now dealing with a whole new level of BS: she must figure out WTF went down in those missing memories, WTF she’s the one hauling this shit around, and—to make matters worse—WTF sold her out.

More than I thought would.

You know the acronym—Post-Traumatic Stress Disorder. If you’re like most, you associate it with survivors of war, soldiers returning home, victims of incredible abuse or an accident survivor. You think blood and gore and broken bones and bullets flying and fists and whatever else comes at one from the ugly side of things.

I think… a man’s raised voice, laced with focused intention. …the pressure of somebody behind me. …sexual advances when I am struggling with my depression. …the subtle unweaving of my success, my confidence, my wants and my needs.

I remember fear in the dead of night and razor blades at dinner. Basically? I am Jessica Jones, and I don’t even have the raw strength to fight the battles I need to.

Listen. There’s a thing called “complex PTSD”, and it’s a disorder caused not by one single event but by the stacking of many. “Non-combat PTSD” is when you have all the same symptoms—flashbacks, panic attacks, disassociation, bone-deep fear, paranoia and more—but you didn’t pick it up at a battlefield or a crime scene or a car crash… You just…

You just lost. You lost everything. Your confidence, your physical safety, your emotional and mental balance. Each brick of your foundation chipped and whittled and shaped into what something else, somebody else, demanded of you. Until one day something happens, something breaks, and if you’re lucky, you surface from that sleepwalking hell into the stark, cold, terrifying reality: you are not the person you thought you were. You aren’t even in the same dimension.

And you aren’t worthy of anything better.

I wish I was Riko. (A smooth shift back onto the main road!) Riko’s coping mechanisms, while unhealthy, are so much easier for me to understand. What I’d give to be able to channel all this bottled in rage and fear and shame and explode it all over some motherfuckers what need educating. I have a list. I’d feel so much better if I could just tick off each line, one by one. “Exploded, bloodied, broken, dead.”

I announce for the cheap seats: I am a struggling buddhist.

Those who live by violence beget violence. Those who rely on the punch receive more in kind. In my first draft of this book, Riko—my violent, angry, bloodied bitch—became an extension of me. And it wasn’t great.

See, after Necrotech, Riko found herself at the bottom of the food chain. Her life, her sense of security, had been thoroughly shredded. (Spoiler alert: there is blood. So, so much blood. And fleshy, wobbly bits, mostly unattached.) Starting with nothing is daunting at the best of times, but as Nanoshock opened under my furiously typing fingers, I realized:

I, too, was starting over from nothing. Everything I’d built had been stripped away, and not least of which had been my pride as a human being, my sense of self, my confidence, and yes, my voice. Like waking up from a dream I hadn’t realized was so violent in its calm, extremely slow pace, I suddenly surfaced into the real world and saw, felt, understood that I had nothing.

Because I was only allowed to have nothing.

And here I was, trying to set Riko on the path to rebuilding her own life when I didn’t have the first idea of how to rebuild mine. I couldn’t even face my own trauma—and like Riko, I didn’t want to.

Nanoshock is late to the shelves because it took me two years—two years—to fight through the bloody wounds and ragged scars and sheer fucking shame that comes with PTSD. First, I had to acknowledge it.

And then I had to get help.

Two years. I’m still in therapy, and I will be for a long time. It’s like I had to reach this point to understand where Riko needed to go. And I understand enough about her to understand that it’ll take her a lot longer than the time she has to get to where I am working so hard to be.

Sometimes (often?), an author has to know the answers first before they can reverse engineer it back to the beginning.

The schematics of trauma are a mess. But having been there, and struggling every day to cope with the sense of violation, fear, programmed responses and cold uncertainty, I feel so much better equipped to write Riko’s struggle (and by god, it is a struggle).

You see, although it’s taken me years, I have finally been allowed—encouraged, given sanctuary for it—to own my trauma. I can work through it. I can face it head on and slowly, sometimes painfully, take the teeth out where I can.

But Riko? Riko’s journey is harder. A narcissist, proud of her place, having fought tooth and bleeding nail to earn it, and stubborn as all get out, she doesn’t have the support network I needed to resurface. Won’t take it. Won’t bend, won’t forgive. She’s got a lot to learn to deal with. That could have been me.

So here we are, you and I. Back at the Big Idea, where I share all the aspects of my world that fuel the rage and pain and violence and motherfucking demand for hope that makes up Riko’s stories. Redemption for us both on the page; pain all around for free.

Riko’s journey is only just beginning. It seems funny, when I look at it, to think it took me this long to claw my way back into my own skin just to rip Riko out of hers. And unlike me now, but very much like me then, Riko is unable to own her trauma. Until she does, she can’t mend the wounds.

Until those wounds are mended, she will bleed out—bit by bit, emotionally and mentally and yes, even physically. Wounds on the body help. They bring peace. Riko knows this, and it’s an ugly kind of truth.

Does she have the strength to overcome this as she punches, shoots, swears at and otherwise rocks every obstacle in her path?

If I can, then Riko can. And if Riko can, then you can.

See how this works?

Nanoshock, where the darkest shit is yet to come and still, even still, holding on for another day means another day of hope, redemption, and a sense of self.

I got drunk to write this.

A memoir, yes. But also, acknowledgment. Of self and of the arc of trauma. Of the grit that nobody likes to see—not really, not the gritty, filthy, infected stuff that oozes over the veneer and smells like rot. But also, acknowledgement that there is a way back to the light. Grab it where you can. Tomorrow, nursing the hangover, follow through on what it takes.

We got stuff to do, you and I. We have things to accomplish. If I can do it, Riko can.

And if Riko can?

Well, you see where this is going…

As for me? I’m going to therapy. And Riko? She’s going to kick some ass. Between the two of us, there will be a lot of drunk nights. You see, drunk, high, or otherwise jacked up makes the nightmares easier to face.

But sobriety always follows. We’ll fight and fall and claw at the ledge, and there will be some tears. But you know what? That’s okay, too. Growth fucking hurts. But hey. We survived, right? (It’ll take her a bit to realize that… She, unlike me, doesn’t have two years to do it.)

As Riko would say, zen it.