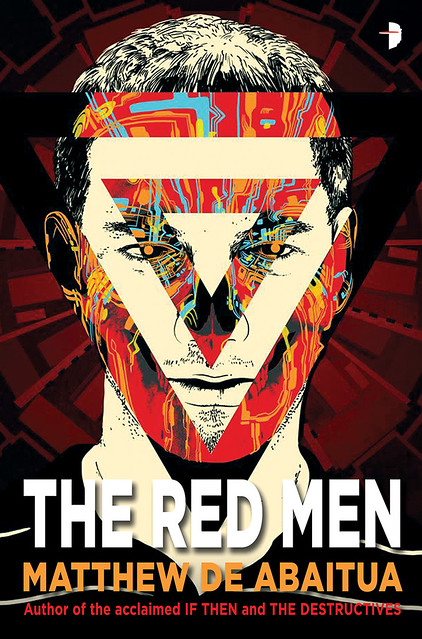 Work sucks. In The Red Men, author Matthew De Abaitua has come up with an answer. Uh, maybe. He’s here to explain that whole “maybe” part.

From an early age, I was terrorised by the prospect of getting a proper job. A summer spent working as a security guard on the docks convinced me that my intuition concerning work was correct; it was a desperate exploitative world and not for the likes of me. What if I could somehow accrue all the benefits of going to work – a salary and social status – without having to subordinate myself to its deadening routines?

The big idea of my novel The Red Men comes from this yearning, although it in no way solves it. The novel turns around the question of your collaboration with power, how much of yourself you can trade to get on in the world, or can you deny all attempts by the “real world” to control you and instead live freely and imaginatively.

To explore this question, I invented the Red Men. The Red Men are simulations of real people devised by an artificial intelligence. They are not copies. We will not be able to digitally copy consciousness. Mind cannot be separated from body in that way. Instead, our technology will tell stories about us, based on its observations of our desires and behaviours.

In my novel, these stories are The Red Men and – for a regular subscription fee – they will do your work for you: capable of processing data at light speed, and gifted with your way of seeing the world, your Red Man toils in an office job while you are free to profit from their salary and find more a productive way of using your time.

I was first attracted to the idea of a digital self because it promised an incorporeal immortality. Planning the novel out, I realised that a digital land-of-do-as-you-please wouldn’t work fictively. It would be like writing out a long dream. The readers wouldn’t care about what happened in a realm in which all harm can be undone, all damage reversed. I would need to find a way of making the readers care.

All virtual worlds suffer from being as inconsequential as a dream. That’s why, if you die in the Matrix, you die in the real world – its the only way to make the Matrix matter. The novel may have been born of my immature desire to live in a world governed by the pleasure principle but it could not be told from the point of view of a digital person. Rather, the point of view of the novel had to follow the real people who work with the Red Men, and who suffer from their interaction with simulated people. After years of idle planning, it was this realisation of the narrative point of view that kickstarted my writing.

The Red Men is told from two points of view: Raymond is a down-at-heel poet who is drawn into the customer service department managing the interaction between the Red Men and their subscribers; Nelson is more senior than Raymond, having worked for years for the company Monad that creates the Red Men. So Raymond’s point of view, new to this world, as he discovers Monad and its products, accords to that of the readers. Nelson, who is more steeped in Monad, provides insight into the back story of the technology. Indeed, it is Nelson who first devises the name of the Red Men when he first meets the company’s artificial intelligence, and it is Nelson who is tasked with expanding the program in the middle of the novel, when Monad decide to simulate an entire town to help them predict mass effects and reactions to government policies.

The novel is structured according to this question of whether it is possible to deny the imperatives of the “real world” of jobs, mortgages, health care payments and live in a realm of your own imagining and control. Chekhov once observed of Tolstoy that while he didn’t have the answers, he asked the right questions. A novel shouldn’t be didactic, it is a more exploratory form. Power it with a good question rather than your idea of an answer. The question runs through the heart of Nelson’s relationships – whether he should allow work to take him away from his family – and through Raymond’s troubles, as he is drawn into the work of Monad’s rival company Dyad, which specialises in technology that exploits and inhabits the human unconscious.

When I found my emotional connection to the big idea, I was finally able to write it. Only after I’d spent a few years toiling in an office, subordinated to nonsensical corporate cant and bullshit imperatives, having had the shit bored out of me, was I able to put my big idea on a stage crafted by everyday frustrations and yearnings.