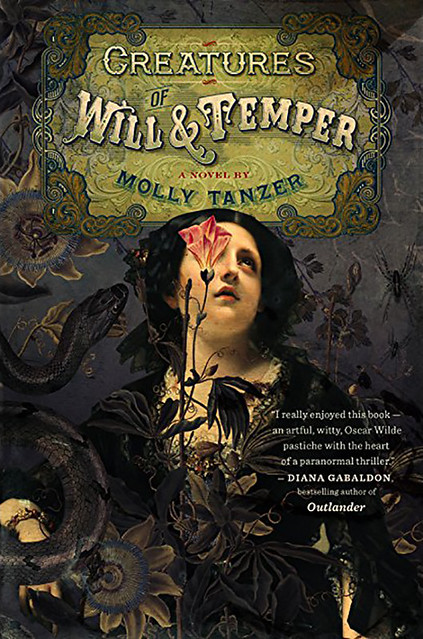 Absinthe makes the brain grow more creative — at least in the case of Molly Tanzer, whose encounter with the spirit helped to inspire her novel Creatures of Will and Temper. Want to find out how? Sit back and pour a stiff one as Tanzer tells you.

I’m delighted to do my very first Big Idea for my new novel, Creatures of Will and Temper, because I actually did have a “big idea” that sparked the project and then informed my entire approach to it.

This is the story pretty much as it happened: I was sitting on my porch one summer morning, drinking an absinthe cocktail and reading Oscar Wilde’s Victorian classic, The Picture of Dorian Gray, when I got to this part in the book…

[Dorian’s ] eye fell on the yellow book that Lord Henry had sent him. … He flung himself into an arm-chair and began to turn over the leaves. After a few minutes, he became absorbed. It was the strangest book he had ever read. It seemed to him that in exquisite raiment, and to the delicate sound of flutes, the sins of the world were passing in dumb show before him. Things that he had dimly dreamed of were suddenly made real to him. Things of which he had never dreamed were gradually revealed.

…and in my intoxicated state, bewitched by spirituous liquors and addled the strong rays of the sun, I thought to myself, What if Lord Henry Wotton was a diabolist and had given Dorian Gray a “yellow book” that was a demon-summoning manual instead of a novel? That would be dope.

This idea took hold of me like the ideas in the yellow book take hold of Dorian Gray, beguiling me and distracting me from what I was supposed to be doing at the time, whatever that was. I can’t remember—probably all that absinthe. Anyway, the important thing is that I started obsessing over what I’d personally want from a Dorian Gray retelling, were I reading it, not writing it, and that served me well.

That put the project off to a good start; at least, I thought so. As I continued to think on it, I decided to focus on one of the less explored aspects of The Picture of Dorian Gray—that of mentorship and its various consequences—and for that, I’d need a different take on the Dorian/Lord Henry relationship. In the original, Lord Henry Wotton is not an admirable character, so I decided to instead make Lady Henrietta the Platonic ideal of all the lady teachers I’ve crushed on hard over the years. Similarly, the rather repellent Dorian Gray became Dorina, a mosaic of the artistic young women I went to my small liberal arts high school and college with in prosaic south and central Florida.

But as a lifelong fan of Star Trek: The Next Generation, I knew I’d also need this motif to be repeated to drive it home—there had to be an “A” plot and a “B” plot that dealt with the same issue in different ways. Dorina’s arc needed a natural counterpart. Thus, enter Evadne Gray, Dorina’s elder sister and a character wholly my creation.

Evadne came to me all at once, just like the idea for this book. I realized that if I wanted to focus on women’s relationships, Dorina needed a sister, not just a mentrix—a sister who was similar to her in terms of her capacity for love and enthusiasm, but so very different in her interests that they’d always be at cats and dogs with one another. Dorina was to be enthusiastic, artistically minded, and socially adroit even while she possessed a healthy dislike of “society”; Evadne needed to be a bit of an awkward jock (fencing is her passion), reserved and concerned with the sort of restrictive propriety that is the last refuge of the born misfit. So often, people cling to that which does not serve them—that had to be Evadne’s core, as an athletic but awkward woman, in contrast to Dorina’s willful rejection of a world that was only too eager to accept her on the basis her youth and beauty, merits she rejects.

Two different misfits who both come to find two different mentors—Evadne finds a fencing tutor as apparently perfect for her as Henry is for Dorina, and every bit as secretly mysterious. And in that way, too, I tried to be “faithful but not” to Wilde’s original novel. Both The Picture of Dorian Gray and Creatures of Will and Temper are about what happens when someone is consumed by passion. In the end, I hope mine is a bit more forgiving of its protagonists, and a bit more hopeful, or at least less cynical in its conclusion about the fundamental nature of humanity.