So here’s some lively holiday news: An Old Man’s War movie is currently in development at Netflix. Surprise! Here are the details over at Deadline.com. I’m pretty happy about this.

And now, your questions:

Hell, yes. One, because I would love to see an OMW movie. But also, two, Netflix is a place where a lot of fantastic entertainment is happening these days. It’s trying a lot of things and taking a lot of chances, and most people I know who are working with Netflix are thrilled about being there right now. It really seems like it could be a great place for the OMW universe.

So is this a movie or TV series?

It’s a movie. On your television!

(Or computer or phone or monitor or wherever you choose to watch Netflix, I don’t judge.)

But can a two to three hour movie truly hold the vastness and complexity of Old Man’s War?

I mean, yeah. It’s a pretty speedy story in that first book. And as to the rest of the universe of the series, if the first OMW movie works and people watch it and like it (hint, hint), we can have sequels. There are six books! We have lots to work with.

Who is going to be in the film? You should get [insert favorite filmmaker/actor here]!

Whoa, there. This is the development announcement, where we announce the studio (Netflix) and the producers (Jon Shestack Productions and Madhouse Entertainment). Now that we’re all on board with making the movie, we’ll start putting all the puzzle pieces together. Don’t worry; when we pick folks, we’ll probably do follow-up announcements.

Hey, wasn’t Old Man’s War in development as a movie, and a TV series, before?

Indeed it was. It was in development at Paramount for a while as a movie, and then at Syfy as a TV series.

It just didn’t work out. Both times, really smart folks did a really excellent job and tried to make it happen, but the entertainment industry is what it is, and the stars didn’t align.

But this time will be different!

Well, yes, I hope so. It would be nice. I think we have the studio and producers to make it happen.

How long has this been percolating?

I got the rights to OMW back in the summer. We fielded pitches and offers and then in October, while I was out in California, I had a meeting with the producers. After that it was just waiting on contracts.

Man, lawyers, am I right?

In this case, I’m a big fan of lawyers. Mine (Matt Sugarman) has done very well by me. As has my film/TV agent, Joel Gotler, and my book agent Ethan Ellenberg has been part of this particular brain trust, too. It takes a village to make a good deal.

How involved will you be in the production?

As the article linked above notes, I’m an executive producer on the movie, so I’m pretty substantially involved. Which is nice! I have opinions, you know. I’m going to share them.

So can I have a job?

You’ll have to go through official channels.

Yes, but not that official channel.

Okay, well, can I give you this script of something entirely unrelated?

So, this is great, but what I really want is a film/TV version of [insert another book/story I wrote here].

I have a number of things in various stages of development, only one other of which (The Collapsing Empire) is currently public knowledge. When/if those other projects get to public knowledge stage, trust me, I’ll be talking about them. Just like this, in fact.

I will say that it’s an exciting time to be me, and that with the projects currently in play, I’m lucky to be working with some incredible people. I feel very fortunate that this gets to be my life. And today, I feel particularly fortunate that we’re working to get this Old Man’s War movie to you.

Arrrrgh I can’t wait HELP ME.

Well, there are the books. And Old Man’s War itself is just newly released in a delightful pocket-sized hardcover edition! Which, by the way, if you order from Jay and Mary’s Book Center through this Sunday, I will happily sign and personalize for you (along with any other book of mine you buy).

I see how you dropped an ad for yourself in there, Scalzi.

I have other questions or comments!

That’s what the comment thread is for. Note I’m on deadline (uuuhh, an actual deadline, not just the entertainment news site), so responses might not be immediate. But I’ll get in there. 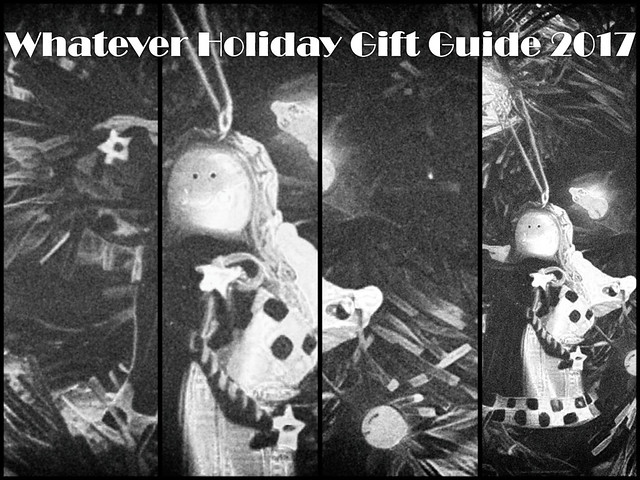 For the first three days of the Whatever Gift Guide 2017, I’ve let authors and creators tell you about their work. Today is different: Today is Fan Favorites day, in which fans, admirers and satisfied customers share with you a few of their favorite things — and you can share some of your favorite things as well. This is a way to discover some cool stuff from folks like you, and to spread the word about some of the things you love.

2. Individually created and completed works only, please. Which is to say, don’t promote things like a piece of hardware you can find at Home Depot, shoes from Foot Locker, or a TV you got at Wal-Mart. Focus on things created by one person or a small group: Music CDs, books, crafts and such. Things that you’ve discovered and think other people should know about, basically. Do not post about works in progress, even if they’re posted publicly elsewhere. Remember that this is supposed to be a gift guide, and that these are things meant to be given to other people. So focus on things that are completed and able to be sold of shared.