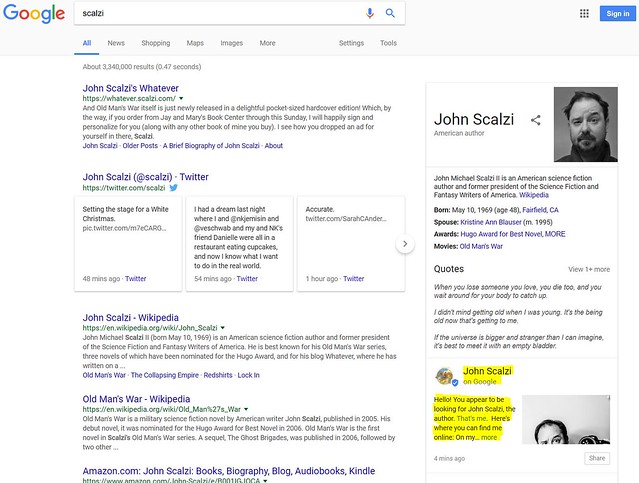 I had cause to do an ego search on my name yesterday and noticed that when I did, Google popped up a couple of new features on the right-hand column, saying that I could post updates and suggest edits to searches on my name. I haven’t seen news or posts about this new functionality anywhere. I was curious, so I went through Google’s verification process and then posted an update, which I highlighted in the photo above.

So apparently now, when anyone Googles me, among every other thing they will see, they will see an update actually from me, which is I think a very interesting thing. I have not suggested an edit to my search results, although I am interested to know what that might entail. On one hand, if people are trying to manipulate Google search results to spread lies about one, I could see it coming in handy. On the other hand, if one is trying to get Google to suppress inconvenient truths about one’s self, this could be a problem. We’ll see how it eventually functions, I suppose.

To be clear I certainly don’t mind Google allowing me to have a little space on my search results. On first blush it seems like a neat idea (and it’s appropriately off to the side, rather than in the actual search results). My update pops up on “Scalzi” and “John Scalzi” but not on related searches like “Old Man’s War” or “Whatever,” so it also appears reasonably tightly targeted.

During the verification process, it was noted that this is a sort of beta/trial run program, so I don’t know if it will be available right now to everyone notable enough to have a right-hand column when someone searches on them (my best guess as to why I’m in the trial program: I have a secured Gmail account and a Pixel 2 phone, which means I’m pretty deep into the Google ecosystem, and also I’m verified on Twitter, which adds an additional layer of being able to confirm I am who I say I am). If I were an author/creator/person of some notability, I would go check and see if you’ve gotten an invite.