In 2010 our dog Kodi died. Krissy was pretty wrecked about it, and decided that it would be a while before we got a new dog. That lasted a couple of months, until she was somehow cruising a pet adoption site and saw the picture of a two-year-old half labrador, half mastiff named “Daisy.” She immediately fell in love with the pup and decided that she would be ours. I did not argue. Daisy came into our lives on October 16, 2010.

The thing about rescue dogs is that they come with their own set of baggage. Daisy’s baggage was that she hadn’t known permanence. In her two or so years of life she had been shuttled between several homes, and in some of them she hadn’t been treated very well. She had been bred when she was very young (not a great thing for a dog) and then basically abandoned after the puppies were born and presumably then sold. Her other homes also proved temporary, for various reasons.

As result of many homes in a short life, and also simply I suspect her own nature as a dog, Daisy was almost neurotically cuddly. This was particularly the case with Krissy, sticking close to her whenever she was home, and making sure that no other creature in the house got more pets and love than she did. She wouldn’t stop you from petting that cat; she’d just butt her head up against your other arm and make sure you knew that you were free to pet her too, if you wanted to, no pressure. I have a higher than average number of pictures of Krissy petting two animals at once. Now you know why.

Aside from the need for cuddles in any and every circumstance, Daisy turned out to be a very good fit for the Scalzi household. She was generally low-maintenance and friendly, and she got along with everyone, and everyone reciprocated, which pleased Daisy to no end. Our previous dog Kodi was an Akita, and people who were unfamiliar with her were wary of her because she looked like she was parting you out for snacks. No one ever felt that way about Daisy. The worst Daisy would ever do to anyone was shed on them.

And because she had once been a mother, I think, her behavior toward the cats in the Scalzi household was exceedingly gentle and maternal, particularly toward the Scamperbeasts, who arrived as young kittens. Daisy fell in love with them almost immediately and the feeling was mutual. It was not in the least unusual to find Sugar or Spice cuddled up next to her and both animals napping away contentedly. It was a family of pets, within the larger family of us. 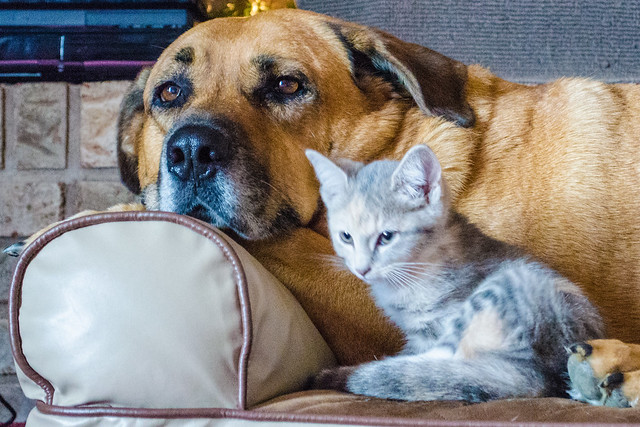 Daisy was a large dog — she had the facial features of a lab but the size of a mastiff — and the thing about large dogs is that they don’t stay with you as long as some other breeds of dog might. Daisy was with us seven years, until she died in the early hours of this morning. In the last couple of weeks her appetite had lessened, and she was listless and had a fever; we took her to the vet, who put her antibiotics. These worked, until they didn’t. Yesterday in a few surprisingly short hours it became clear that whatever the underlying problem was that caused the fever, it had become life-threatening. In the early morning we started the journey to an emergency vet clinic. She passed along the way.

It’s sad when your dog dies, because she is part of your family, someone you love and someone who loves you. I grieve for Daisy, and I will miss her, and I will miss her gentleness and her lovely spirit. She was a good dog. But I’m also glad, and even thankful, that for seven years this dog who had previously never known permanence in her life had a home, had a family and had love, and could give it back in equal measure. She made our home, our family and our love complete with her presence. 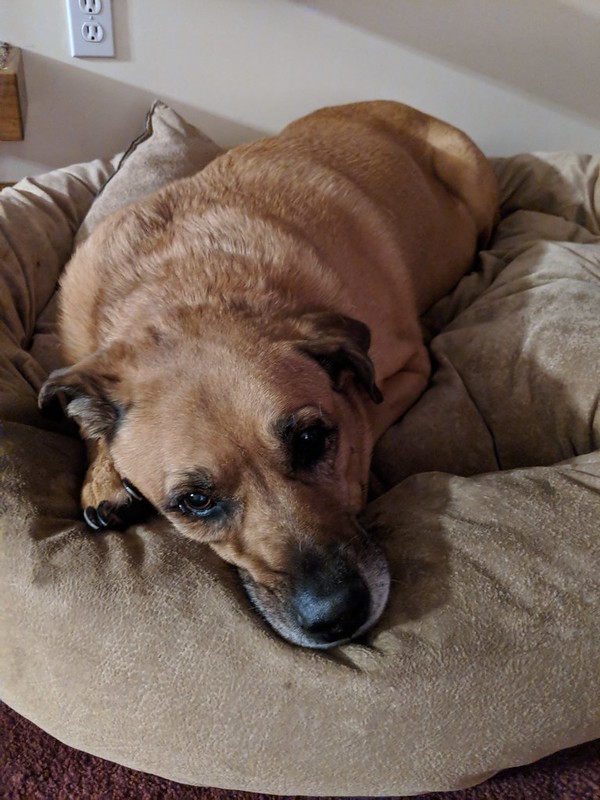