I had a short story come out today: “Three Robots Experience Objects Left Behind From the Era of Humans for the First Time,” as part of the Robots Vs. Fairies anthology. And here’s something I would like to show you, regarding the story: Four takes on “Three Robots,” from four different Goodreads reviews of RvF, each one giving the story one star fewer than the review preceding it (note: minor spoilers in a couple of the reviews): 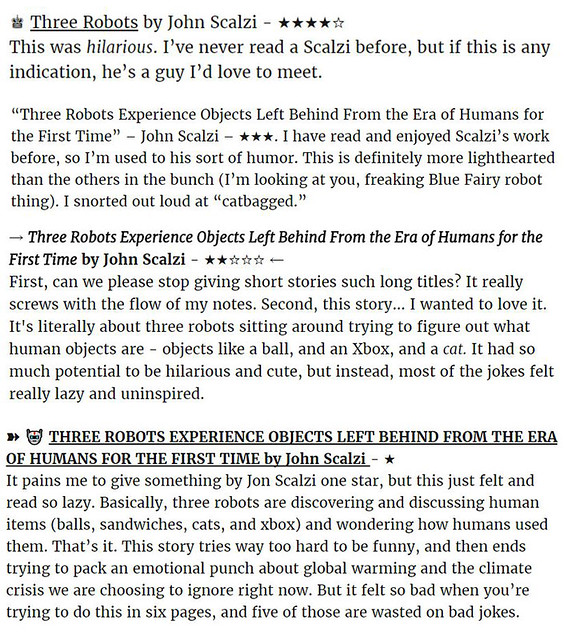 Which review is correct? Of course, they are all correct. Which is to say, they accurately represent the opinion of the person writing the review. Depending on who you are and what you want out of a story (or what you want out of a story from me), “Three Robots” is a four star story, or a three star story, or a two star story, or a one star story. It might be your favorite story in the collection, or the one you actively hate, or the one you don’t remember the instant you stop reading it. The text of the story is the same regardless of who reads it, but the experience of reading it is unique to the person reading.

This is a very important thing for writers (especially newer writers) to learn and build into their worldview: That everyone’s experience of your work, and any reviews they might then write, are inherently subjective, dependent on the person writing them, and there is nothing in the world you can do about that. That’s just the nature of putting work out into the world. Your job is to write the story as well as you can, and not worry overly much how it will be received. Because, as you can see above, it will be received well, and poorly, and everywhere inbetween.

And yes, learning to be okay with the fact everyone won’t love what you wrote is hard, because everyone has an ego, and everyone likes the validation of people enjoying their work. But as I frequently tell people, there are creators who I admire and whose work I love, and every single one of them has something they’ve created that I don’t like. Sometimes more than one thing! And sometimes it’s more than just not liking; sometimes I kinda actively dislike it. Or even hate it. On the flip side there are creators whose work I mostly dislike who will have that one thing that just works for me, or that I might even love. It happens! And then the whole mass of creators in the inbetween, whose work is mostly okay for me, but occasionally veer into the “like” or “dislike” territory.

If I feel that way about the creators whose work I experience, how can I expect any different from anyone else? I don’t expect everyone to like what I write equally; I don’t even expect people who like what I write to like it all equally — or uncritically. That would be weird and a little unsettling. I mean, you don’t need to tell me personally when I write something you don’t like. Feel free not to. But if you think yourself “I like Scalzi’s work — well, except for [X] which really kinda stank,” congratulations, you’ve passed a Turing test. You’re human.

Which is how I feel about “Three Robots,” incidentally. I enjoyed writing it, and it did what I wanted it to do, really well. It was fun. If people like or love it, that’s great. If they don’t, that’s okay too. They’re entitled to their opinion, and they’re entitled to share that opinion. I’m glad they took the time to read it. 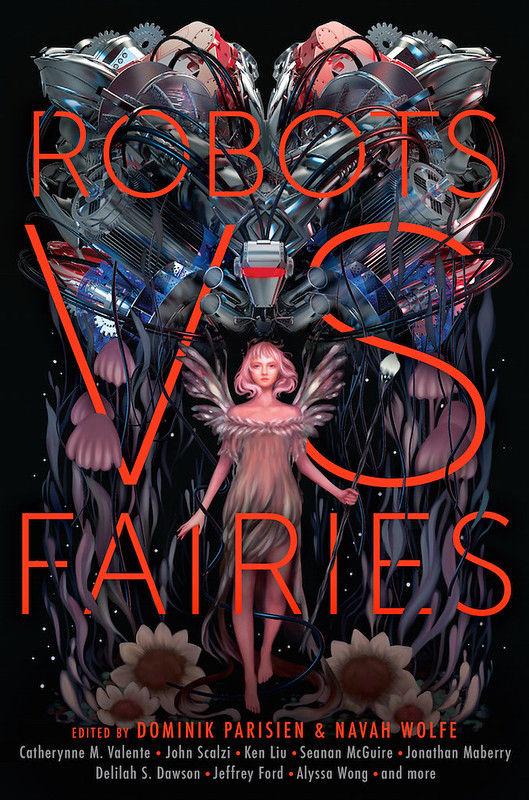 Other authors in the collection include Cat Valente, Seanan McGuire, Ken Liu, Max Gladstone, Tim Pratt, Mary Robinette Kowal and others. It’s been getting lovely reviews (“a cinematic and well-paced collection and will please both science-fiction and fantasy readers with its variety” — Booklist; “Exceptional storytelling and well-paced writing make this volume a total delight” —  Library Journal) and is available in the US and Canada in all the usual places online and offline, including your local bookseller.

Congratulations to Navah Wolfe and Dominik Parisen, who are the editors of this anthology; they did a fab job selecting stories and writers. If you like robots, or fairies — or both! You don’t have to choose! — you’re going to like this book. 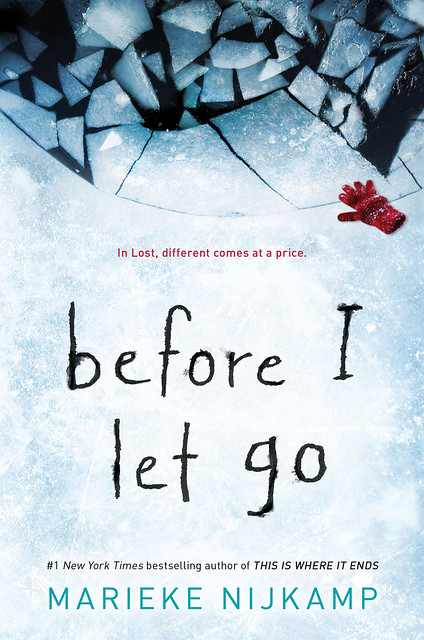 We’re back with Big Ideas for 2018! And to kick us off, author Marieke Nijkamp talks to us of her new novel Before I Let Go, and takes us below the cold surface of a community that holds its secrets close.

“Lost has created new legends since you left. It’s such a human thing to do. We tell stories about what we don’t understand.”

That is what Kyra, one of the main characters in Before I Let Go, writes to her best friend Corey. She never sends that letter, but Corey finds it, eventually, when she investigates Kyra’s death. She finds it along with Kyra’s other letters and other stories—and her hometown’s belief that it lost a prophet.

Stories and storytelling are at the very core of Before I Let Go. The stories we tell about the world, about each other, about ourselves. The stories others tell about us. And the tortured truth that exists somewhere in between.

We tell stories about what we don’t understand. For me, when I was growing up: the world. I was a physically disabled, autistic kid in pre-internet days. I didn’t have a clue how the neurotypical world functioned. So I bonded with fictional characters. I dove deep into their psyches and followed them on their emotional journeys. I would ask myself, unironically, What Would [insert character] Do? if I wasn’t sure about the correct response to a situation.

It was a flawed method of learning. Not in the least because I grew up a fantasy reader. And because I—disabled and queer and strange—didn’t exist with any likeness in those books, and I only learned to be other people, not myself. Still, I had entire worlds at my fingertips to study. It helped me pass as neurotypical magnificently, for as much as that’s a flawed concept too.

(I began to swap out passing as different for embracing who I am when, as a teen, I discovered Dungeons & Dragons and role play. when I discovered creating and testing different characters, when I started to write like my life depended on it. And slowly, I learned that understanding is a quest, not a goal.)

We tell stories about what we don’t understand. It was my core tenet at college and grad school, where I spent my time with medieval manuscripts and the history (and politics) of ideas. I learned to ask questions: which narratives were we reading? Where did they come from? What were they trying to achieve? Which narratives survived the ages? Why did they survive the ages? Who tells a story? Why do they tell a story? What is the purpose of a word, a scene, the whole work, of its existence?

Who does a story belong to anyway? Both? Who do we listen to? Who do we trust? What was said in the tales that don’t exist any longer? What stories have we silenced? And whose voices do we silence still?

They’re good questions outside the realm of medieval manuscripts too.

We tell stories about what we don’t understand. That’s how Kyra went through life, and there is a personal truth to it too. That quest for understanding is why I’m a writer. All my books and short fiction start with questions, even those so deceptively simple as how, why, what if.

The answers are far more complex—and always purposeful. I manipulate narrative threads. I make decisions about what details to keep out and what to leave in. Every word, every scene is a conscious choice. Every silence, too. After all, sometimes the most important stories exist between the lines of what is told and untold.

The truth can appear malleable, even though facts are still facts. Manipulation influences interpretation. And stories are both the most wondrous type of magic and the most dangerous things in the world.

“We tell stories about what we don’t understand,” Kyra writes, before she dies, lost and lonely. “I just never considered what it would be like to be at the heart of one of those stories. I want to study myths, not star in one.”

And that’s the heart of it: the spark for this book. From there, Kyra’s legends, Corey’s storytelling, and the tales others weave around them never quite line up. At the start of her investigation, all Corey knows for a fact is that her best friend is dead. And the truth to why, how is yet to be uncovered.

Some might say that stories killed Kyra; others that they saved her. I say Before I Let Go is a love letter to storytelling—but maybe it’s a warning too. In truth, it may be all of the above. Let’s just say, it depends quite a bit on which side of the story you take.