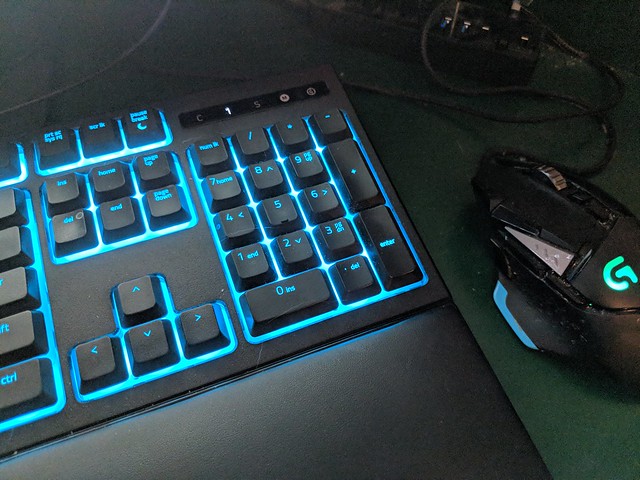 I mentioned on Twitter that when it comes to PC-based video games, I have a keyboard/mouse control scheme that horrifies and mystifies everyone who learns about it, because it is so far deviant from the traditional “WASD” setup that people don’t know what to think about it. This of course meant I was immediately asked to reveal my heretical control scheme. I will do so now.

Basically, I do everything on the numberpad and the mouse and don’t use the primary keyboard at all. Also, I use these mappings primarily for first person shooters, as that’s my favorite type of game, although I also do usually map other types of games to some variation of this control scheme. Also also, I don’t claim this to be the best controlmapping scheme, merely the one that I’m used to; I’ve been using some variation of this since the Quake days 20 years ago. I will say WASD feels awfully cramped to me and I don’t know how it became the standard.

So here’s how I map my controls on the numberpad and mouse.

7: Strafe left
9: Strafe right
4: Lean left
6: Lean right
0: Crouch
.: Fire
Enter: Fire secondary
+: Jump
/: Reload
*: Flashlight
Page Down: Use
8,5,2,1,3,-, pageup, home, end: Available for other controls the specific game might have, like sprint or map or inventory or health regeneration or whatever.

This works for me because it puts all the primary movement into the mouse and most of the secondary functions onto the numberpad. The mouse is all about looking and moving, the numberpad about shooting and occasionally ducking, leaning and jumping. Also the number keys aren’t staggered weirdly like the keys on the larger keyboard; they’re straight up and down and across, which for me makes them easier to use in a game situation.

As far as I know there’s only one other person in the world who regularly uses this setup: My kid, who naturally learned it from me, because she started playing video games on my rig. She, like me, is not sure why anyone does it any other way. I don’t expect other people to come around to our way of thinking on this, mind you. People use what they’re used to. This is what I’ve been used to for 20 years. It works for me. 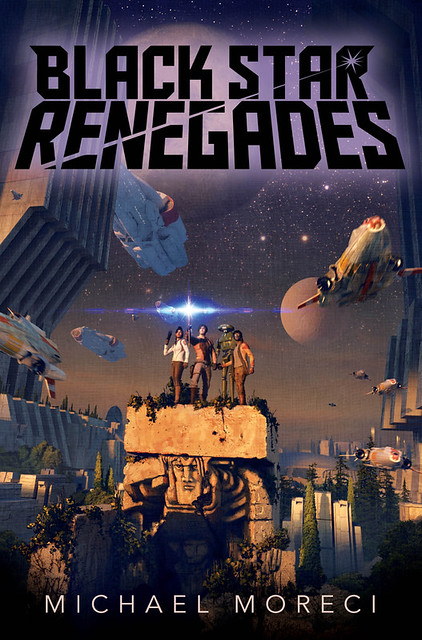 Today on the Big Idea: Author Michael Moreci, with his novel Black Star Renegades, shows you how to write a media tie-in that’s not a media tie-in and in fact becomes something else entirely in the telling.

A lot of writers will probably hate me for this, but the idea for Black Star Renegades was kinda given to me. But don’t worry, because this stroke of fortune was proceeded by years and years misery. I’ll explain:

I’m a huge Star Wars fan. Like, it’s unhealthy. I talk about it a lot (sorry to you, my lovely and patient wife), and I write about it a lot (on my own website and for StarWars.com). I even have the Rebel sigil tattooed on my forearm. My brother has the matching Empire sigil on his forearm, so I’m not alone in this. Anyway. One day, I received a call from an editor at St. Martin’s, the future editor of Black Star Renegades. His name is Marc, and Marc said, “Mike, you love Star Wars. Write me something that’s Star Wars.” My first impression was “Isn’t that illegal?” but Marc explained that he wanted something that captured the spirit of Star Wars—pulpy space adventure with a lot of heart, great characters, and boundless imagination. I agreed immediately. Even if Marc had been asking me to write an unsanctioned Star Wars novel, I still would have agreed.

Now, like I said: there’s misery to this story as well. Because the only reason I was on Marc’s radar is because I’d been pitching him for years. I can fill a graveyard with my rejected pitches (and, truthfully, that’s where most of those pitches belong). But that’s how most of professional goes—it’s a marathon, not a sprint, and the trick is to stick around long enough (and be good enough) to one day catch your break. And that’s what happened with Black Star Renegades.

Marc’s phone call and my passion for the galaxy far, far away is what drove the book’s inception. But something strange happened along the way. The more I wrote this book as the stepchild of Lucas’s beloved creation, the less interested in it I became. Don’t get me wrong, Black Star Renegades has Star Wars imprinted in its DNA, and I totally embrace that. I love it for that reason. But I didn’t want my story to be just that. I wanted it to be more, I wanted to have something to say that was my own.

But that’s how Black Star Renegades became interesting to me. See, I’ve always had trouble with the messiah complex. The idea that we should sit around and wait for an all-powerful someone or other to come along and save our butts from the fire isn’t a healthy one. It leads to bad places. Like when, oh, I don’t know, a tyrannical buffoon campaigns under the promise that he’s the only one—him alone—who can solve all the country’s problems. And people actually believe him. Because that’s what we’re taught. Iron Man will save us. Luke Skywalker. Katniss Everdeen. Harry Potter. Whoever. There’s a magical chosen one, and without this person we wouldn’t be able to do a darn thing on our own. Sure, we can play supporting roles, but at the end of the day, only one person can vanquish Voldemort or Vader

And that simply isn’t true. That narrative is exactly what I wanted to upend.

It’s funny, because there’s something in the water when it comes to deconstructing the chosen one myth-building, because that’s exactly what The Last Jedi is about. Luke says so himself when he asks Rey if she expects him to take on the First Order all by himself, just him and a “laser sword.” At the time, Rey’s answer would have been yes because that’s exactly what she expected. But she comes to learn, like so many characters in the film story, the dangers in relying on one person—good or evil—to save an entire galaxy. And that’s part of the beauty of The Last Jedi: It shows us that we’re all heroes. Rose, Finn, Poe, Rey—they all play a part in being the heroes of this story. And through their combined efforts, that’s when a difference is made.

Black Star Renegades is unquestionably a Star Wars book. But it’s also an anti-Star Wars book. It’s a galaxy where my version of Luke dies in the first act, and everyone else has to step up and fight back against the tyrannical overlord who didn’t get the memo that one person alone isn’t meant to rule everything and everyone. But the heroes did. They learn that real power comes in unity and togetherness, and that’s how they win.

That’s how we all win.