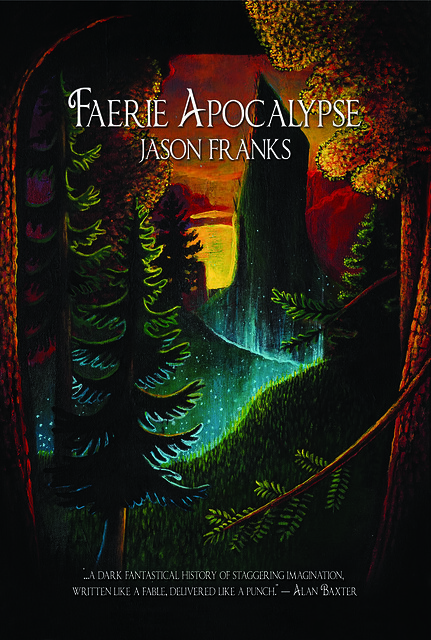 In his Big Idea piece for Faerie Apocalypse, author Jason Franks notes he didn’t want this fantasy novel to have a map — and as it turns out, in many ways, in the writing of the book, he found himself in uncharted territory as well.

A young man travels to Faerie Land looking for a woman based solely on her appearance or other genetic attributes. She has a magical heritage, or royal blood. Of course, she is also beautiful.  In the old days (most of these stories are set in a past era) this was, I guess, considered romantic. By today’s standards it’s creepy at best. What kind of a person does this? This was the Big Idea behind my new book, Faerie Apocalypse.

Initially, I thought it was a short story. I figured out what my protagonist really wanted and I sat down to write it… but once I had begun, I realized that the project was a lot more involved than I had anticipated.

I wanted the engage the sense of whimsy and wonder that makes fairyland stories such a delight for children, and to use that to bring out the darker impulses that makes these stories compelling for adults. I wanted to turn the tropes of the genre against each other.

I needed some distance from the characters in order to maintain sleight of hand and so I made the hard decision not to give most of them names. There’s a story-based reason for this (“Rumplestiltskin!”) but that made it difficult to show enough point-of-view to be engaging. This had knock-on effects that caused me to re-examine the way I write at a nuts-and-bolts level.

My usual prose style is pretty lean (one of my workshop buddies complains that it’s ‘skeletal’), and it didn’t work under these constraints. For this piece I needed something lush, but I didn’t want to let the style get in the way of storytelling. Cormac McCarthy’s work* gave me a good starting point, but mainly I solved this problem through hard graft. I worked it draft after draft, scene after scene, paragraph after paragraph, sentence after sentence, until I thought it was right.

As I built out the story I discovered new scenarios and characters. The story grew to encompass other characters with their own missions: a magician, looking for power; an urchin looking for his father; a wage-slave looking for meaning; a faerie queen who grows tired of being the object of someone else’s quest. It was tough to braid all of these stories together, but as I wrote the book I found connections I had neither planned nor expected.  I was halfway through the first draft before I figured out what was really happening to the Realms under my protagonists’ trampling feet. (Hint: it’s in the title.)

It helped that I knew what I didn’t want the story to be. I didn’t want it to be old-timey. I didn’t want period characters—I wanted mortals originating in contemporary settings (1980s to 2020s). I didn’t want a Faerie Land that is just some adjacent reality—I wanted one that has a reflexive relationship with our own, built from our dreams and our stories. I didn’t want the Faerie Folk to be a bunch of gamebook-classifiable races—I wanted them to be as complex and diverse and perverse as humans. Their immortal lives, bound in storybook rules, make them both more and less than we are.

I also knew going in that I didn’t want a map. The geography and climate in this Faerie Land is mutable and will bend itself to accommodate the stories that play across it—or to the will of those who are powerful enough to influence it directly.

The book is quite short, but I wrote probably 50% again as much material as you see in this final version. The final shape of it is dense and non-linear and twisted. I think it’s a fast read, but a challenging one. I hope you’ll find it as rewarding—and unsettling—to read as it was for me to write.

* Fear not—the book is fully punctuated. Overly punctuated, if I’m honest. I hope you like em dashes and semicolons.

← A Thought, Not Random But Possibly Not All That Consequential
It’s Been That Kind of Day, So Please Accept This Picture of a Cat Who Is, Frankly, All Over Your Brand of Nonsense →