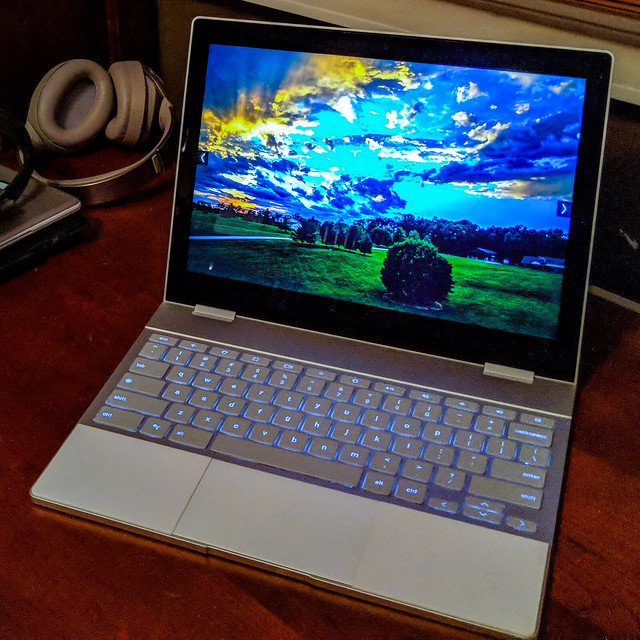 I have come into possession of a Google Pixelbook, the company’s latest high-end Chromebook (don’t worry, I didn’t kill anybody for it, so far) and have been playing with it for most of the day that wasn’t given over to going to the dentist. I’ve played with it enough that I have some definite opinions about the thing, which I will share with you now. Spoiler: This is, so far, a delightful machine.

1. The very first thing I noticed about the Pixelbook is that it is ridiculously thin and light. It’s easily the lightest computer I think I’ve ever had, excepting possibly the original Asus Chromebook Flip (which had a substantially smaller screen and overall form factor). It’s thinner than my third-generation iPad with a Logitech keyboard/cover attached to it (I just checked). Overall, the form factor will probably make it an ideal travel companion.

2. The second thing I noticed is that the Pixelbook is also probably the sharpest-looking computer I’ve owned. Google has its own “glass and metal” aesthetic now, which originated on the Pixel phones but has transferred over to this computer quite handily. This aesthetic is distinct from, say, the Apple aesthetic, and from the general mass of PC laptops, and is simple and clean and functional. I like it. That said, the Pixelbook is already smudged from me being a human on it, particularly the outside glass surface.

3. The keyboard part of the Pixelbook is very nice. The keyboard itself is full-sized and backlit (a must for me these days) and typing on it is pleasant if necessarily shallow given the thinness of the computer. It feels good and clicky and has enough travel for me. The trackpad is glass and responsive; the handrest areas are apparently covered in silicon, which feels pretty good.

As with all Chromebooks, the All Caps key has been replaced with a search key that goes (of course) directly to a Google search. I use this key on Chromebooks about as much as I use the All Caps key on other laptops and keyboards, which is to say, not at all. The keyboard also has a Google Assistant key, which brings up Google’s AI pal, Google Assistant (more on that in a moment). You can also call up Google Assistant by saying “OK Google,” although beware if you have more than one Google device within earshot that activates to that phrase. At the moment I’m in a room that has three such devices. It gets messy (Google, let us train our devices to use phrases specific to them, please).

4. The screen is 12.3 inches diagonally, 4:3 ratio and 2400×1600 pixels, which means it’s nice and sharp. I’ve seen some reviews complain about the size of the bezels surrounding the screen but honestly they’re fine. The screen can get crazy bright if you jack it up all the way. My only complaint about the screen is that it’s highly reflective, so if you’re in an area with a lot of glass and light, well, it’s probably a good thing the screen can get crazy bright.

The screen also folds back all the way to turn the Pixelbook into a 12-inch tablet, and since the Pixelbooks are fully able to run Android apps, the tablet experience is pretty solid. I used the Texture app to read magazines on the screen in portrait mode; it worked like a charm and I was able to see the articles in the magazine’s original layout with the type clear and readable. This will be a very good computer for comics and graphic novels, I suspect.

5. Accessories: 2 USB-C outlets and you can charge from either, but no other slots save for a headphone jack, so be ready to live the dongle life (which to be honest I’ve already been doing for a while and don’t find to be much of an imposition; your mileage may vary). The speakers are perfectly serviceable. I haven’t used the webcam and am not really likely to all that much, but it’s 720p if you’re curious, which, meh, that’s fine.

The standout accessory for the Pixelbook is the Pixelbook Pen, which you can use to draw, take notes, and to activate Google Assistant, if you like. I haven’t played with mine all that much yet, but it works perfectly well and I suspect very strongly that I’m going to lose it in no time at all. Note that the Pen is a separate purchase. If you like using styluses with your computers, you might find it useful. If you don’t (and I don’t, usually), I don’t think it’s a critical purchase.

6. I noted above that the Pixelbook runs Android apps, and I ran several (the aforementioned Texture; Photoshop Express and Snapseed; DJay2 and Microsoft’s Word app for Android) to see how they did. The answer: They ran really well, which is not all that much of a surprise considering this laptop has a very fast processor and about four times the RAM of most top-end smartphones.

This Android compatibility is, I think, the thing that (finally) makes a solid argument for a Chromebook being enough laptop for most people. For most folks, who don’t need an exhaustive feature set for writing or photo editing (or other creative processes), mobile apps will do the job well enough, and the Android ecosystem of apps is both wide and deep at this point. When I travel I’ve found that Chromebooks are more than sufficient for nearly everything I need on the road; I can even do substantial photo editing now with Android apps on a Chromebook. Pretty much the only thing I wouldn’t do on a Chromebook is check the copy editing of a novel, where the copy editor has electronically appended comments — I’m pretty sure it’s possible to do it, but I don’t think it would be a particularly good experience, and I’m not in a rush to confirm that.

I’m enough of a power user across a number of categories that I’ll probably never give up a Windows desktop box (in fact, I recently picked up a new one). But I don’t really use laptops for power use anyway, and again, I suspect that 95% of people would find the Chrome OS/Android combo more than sufficient for 95% of the things they use a computer for, in no small part because I find it sufficient for most things I do. And the Pixelbook genuinely is the current top-of-the-line experience for Chromebooks.

7. A brief moment to talk about the Google Assistant integration into the Pixelbook, as I’ve experienced it so far. It’s fine but it doesn’t feel particularly essential, because search can already be handled a number of ways (use the search key; type a query into the URL field; actually open up Google) and GA is not currently differentiated enough from Google’s general search to make it that much more useful. GA can also do things like brighten or darken your screen or raise or lower the speaker volume or even open up apps for you, but again it’s not as if you can’t do these things yourself, and quickly (I’ve noted a pretty serious lag between me asking GA to do something and it doing it, but I’m not going to blame Google for that. I have notoriously terrible and slow Internet here, so it might just be taking forever for the response to get to Google’s servers, and then to come back. That’s not on Google).

8. I’m going to come out and say I really, really like the Pixelbook. It’s beautiful and beautifully engineered, nicely powerful, everything that’s good about it is excellent, and the things that I question the utility of don’t get in the way of it being close to perfect for me and for how I use laptops. Would I recommend one to you? Sure, if you like Chrome OS and Android, and are content with the Google technological ecosystem.

The caveat is that Pixelbooks aren’t cheap, ranging from $1000 to about $1600, and you can get very serviceable Chromebooks for substantially less. I own an Asus 302CA, for example, which does much of what the Pixelbook does (including flipping the screen around, running Android apps, and having a backlit keyboard) for $500. You’re paying extra on the Pixelbook for faster processors, more memory, a higher resolution screen and the Google Pixel aesthetic (oh, and for Pixelbook Pen capability). You’ll have to decide for yourself if these things are worth it.

Personally, I vote for yes. This is easily the best Chromebook out there, and at first blush at least, it’s the nicest laptop I’ve owned, a title long held by my late, lamented (and stolen!) Mac Air. We’ll see if it holds up in the long run, but for right now: Hey, the Pixelbook is pretty great.

Every January I attend the Confusion Convention in Michigan, and this January was no exception. One again I had a delightful time with many people I like and admire. And I also got pictures, as I often do. I’ll be posting a more complete set at some point in the near(ish) future, but until them, here are some I took, in glorious black and white. Enjoy.