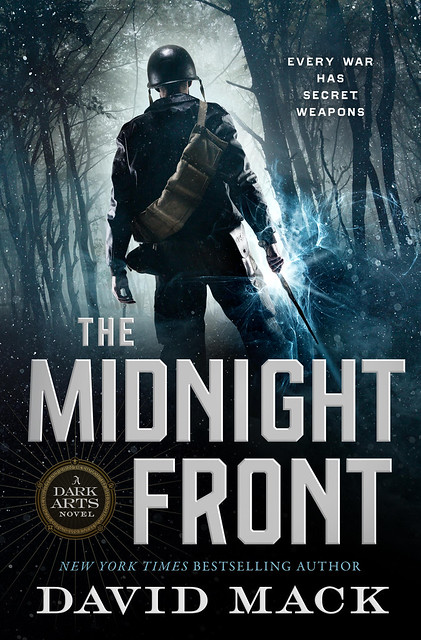 What makes a hero? It’s a question that author David Mack had to confront in his novel The Midnight Front. It’s also a question he gives some thought to here in his Big Idea essay.

Heroes are the ones who step up to take the hit for the rest of us.

I know it’s not a new idea in fiction or myth, not by a long shot. But it remains one of the most powerful and effective elements in storytelling. One of the most universal characteristics of characters who are considered to be inspiring or heroic is a willingness to sacrifice themselves for others.

There are lots of ways for characters to be heroic; not all courage involves physical peril. It can take just as much bravery to charge into gunfire as it does to oppose public opinion armed with nothing more than one’s principles. Some might argue the latter action is the more difficult; to die is the pain of but a moment, but to become a pariah, to risk being cast out of one’s community in the name of what’s right and fair — that’s a pain that can last a lifetime.

Ideas such as these guided my thinking as I developed the story for my new epic fantasy novel The Midnight Front. My main character Cade starts out as an ordinary man, one who has no aspirations to heroism. To motivate him into joining the Allies’ top-secret magickal warfare program, I resorted to a well-worn trope: Nazi sorcerers murder his parents as collateral damage in an attack that is meant to slay Cade at the start of World War II.

What I soon realized, however, was that while revenge can be an understandable and even a relatable motivation for a main character, it is not a heroic one. At its heart, revenge is a selfish motive, one driven by a desire to repay pain with pain, loss with loss. Characters who live for revenge often tell themselves that they are seeking justice, but the truth is that most of them care only about their own pain or wounded egos, and on some level they hope that inflicting retribution upon the ones who wronged them will somehow exorcise their suffering.

But that’s not really how it works, no matter what Hollywood might like us to believe. I love a good revenge story as much as anyone, but even the best vengeance-driven characters tend to wind up as antiheroes: Parker in Richard Stark’s The Hunter (or Porter in Payback, my favorite filmed adaptation of Stark’s novel); William Munny in Unforgiven; Wilson in The Limey. Except for the pulpy goodness of Payback, these stories came to tragic conclusions.

There are notable exceptions, of course. Inigo Montoya in The Princess Bride is one, and both Alejandro Murrietta and Don Diego de la Vega in The Mask of Zorro — but in all three of those latter examples, our revenge-driven heroes learn before the end that they must fight for something more noble than assuaging their own pain. Montoya risks his life to save Westley; Alejandro puts the rescue of innocent lives ahead of his vengeance; and de la Vega knows that his true legacy lies not in his revenge, but in training a new Zorro to be a hero for the people.

Consequently, while I was willing to let revenge start Cade on his path in The Midnight Front, I knew that it wouldn’t be enough to make a hero of him. Because true heroism requires sacrifice.

My supporting characters teach that lesson to Cade by showing him what courage looks like. But it’s only after a taste of revenge leaves him feeling hollow that he realizes it is an empty raison d’etre. So it is that when Cade finds himself on a landing craft heading for Normandy on D-day, he understands at last that his parents don’t need and wouldn’t want to be avenged; they would want their son to honor them, by following a nobler path, a more difficult path. A hero’s path.

This is an old lesson that we watch heroes learn over and over again. In those moments when characters embrace their best selves during their darkest hours, we cannot help but be stirred:

…and, last but definitely not least,

These are the moments that define the heroes we love. The ones in which they’re asked to give their last full measures of courage and devotion, and they do so without hesitation or protest. In the end, this is what The Midnight Front is all about: teaching one man to take the fall — not for fame, fortune, or romantic love, but for one simple reason: because it’s the right thing to do.