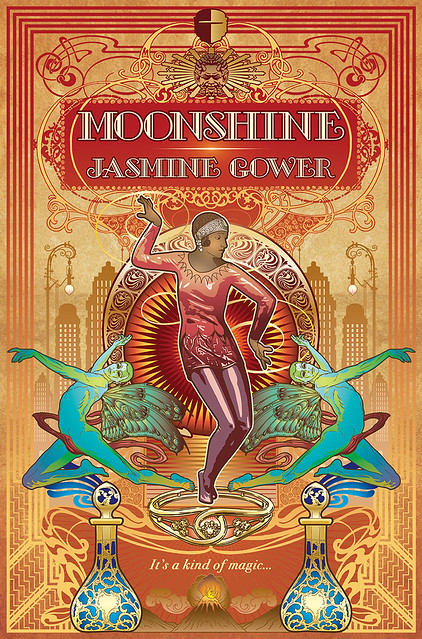 Tedium: Sometimes it’s an excellent motivator. Author Jasmine Gower explains how, and how it helped her novel Moonshine come to life.

The appeal of fantasy is the satisfying escape into the truly impossible, unattainable adventures beyond the reach of even our most exciting moments in the real world. Fantasy provides an opportunity to bring magic and spectacle into our lives so, naturally, part of my upcoming fantasy novel Moonshine was inspired by perhaps the most unmagical thing that has ever happened to me.

I first conceived of the magical prohibition premise of my novel, Moonshine, way back in my high school days before setting aside the project for a number of years. While it was on hiatus, I studied the 1920s more in-depth, learning about the global reach of the flapper movement, the Lost Generation, early 20th century transgender activism, and the racism faced by legendary African American entertainers like Josephine Baker and Baby Esther.  A story about prohibition—magical or otherwise—has quite a bit of interesting history to draw upon, much of which goes ignored in favor of whitewashing and de-politicizing the events in the United States in the 1920s. (Strangely, TV and movies set during Prohibition rarely seem concerned with the motivations behind the Temperance Movement.)

After high school was also when I moved from my little agricultural hometown to Portland, Oregon, and in my daily life became exposed to the city’s historic 1930s brick architecture and horrible, soul-crushing gentrification. I learned about the histories of Portland’s immigrant communities, the college that fell into the river, and the little volcano located in the middle of the city. Modern-day Portland also provided its own fascinating and often horrifying inspiration for crafting a fantasy city of feminist activism, queer communities, dangerous ecology, and black market dealings. And while all of that ended up shaping Moonshine, for the story of Moonshine’s main character Daisy, nothing was quite as influential as my experience working a dull, repetitive, underpaid off-white-collar job right out of college.

It was a basic data entry position, completely unrelated to my English degree and nominally focused on processing workers comp claims, although in truth I didn’t (and still don’t entirely) understand the point of most of the work I did there. My employers must have been satisfied enough with my work, though, as a few months in they moved me from the dungeon-like concrete basement to the bright and airy second floor of our renovated art deco building. There, I was trained in a new task—auditing the work of overseas remote employees even more underpaid than me.

Once more, I was mystified as to the point of the task assigned me. It seemed that I was training the remote employees in my own job, which was strange given that my employer already had me to do my job. That had me on-edge, and I had never gotten on well with the rigid, chained-to-the-desk environment of that office. The tipping point, however, was when my manager threatened disciplinary action after I, following company procedure to the letter, called in sick for a single day after I had contracted scarlet fever. So, that was pretty much the end of that.

It wasn’t necessarily my worst job, but the particular badness of this job provided a compelling question: What does my place of employment even do? Or it would have been compelling, if the answer wasn’t almost definitely just “process workers comp claims and exploit employees,” but maybe for someone else it could have been a question with a more satisfying answer. Enter Daisy Dell, or an early concept of her, who got to be the surrogate in my “maybe my desk jockey job is secretly interesting” fantasies. Could the company be a front for a secret lab splicing superhero genes? Had they captured a werewolf for research on a highly volatile lycanthrope virus? Whatever it was, there was definitely weird science happening in the basement.

And that was when I remembered my magical prohibition concept from high school.

I suppose it stands to reason that the story I ended up writing was not informed necessarily by fantastical elements from my own life, which has a limited supply to pull from, but from the fantasy I built in my head to survive the mundanity. (There were fewer podcasts then, you see.) Daisy’s boring day job does indeed lead her to run afoul a magical moonshining operation, which turns out to be a stressful experience for her, but it was pretty damn fun for me during those long hours of data entry.

My job eventually led me somewhere, too, once I was on my path away from it. After the scarlet fever incident, I only stayed on long enough to cushion my savings to take a while off of work. And the day I was gone from that tedious, miserable day job? I started writing Moonshine.

It’s the first trade review of the book (and, in point of fact, the first review of the book, period), and it’s a good one, and calls Head On “Very clever, wonderfully satisfying fun.” There’s a pull quote for you. And it’s nice to have someone entirely uninvolved with the book give it a thumbs up.

The full review is here, although be warned that while there are no real spoilers, the review does go into detail about plot beats. So if you want to be entirely surprised, you might want to skip the full review for now.