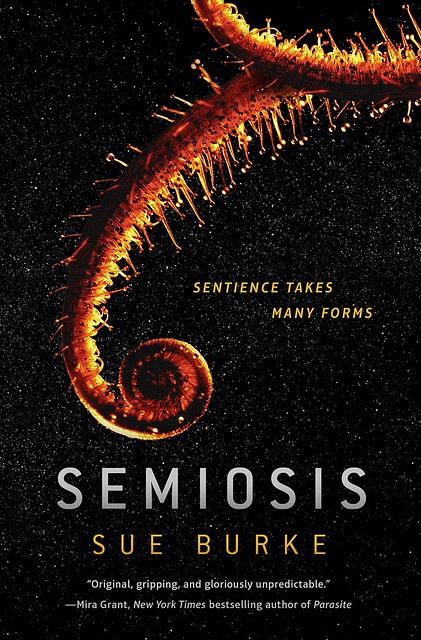 Got some houseplants? By the time you finish reading Sue Burke’s Big Idea essay about her novel Semiosis, you’ll never look at them the same way again. That’s pretty much a promise.

Who’s in charge of the planet where you live? Is it you – that is, humans? Maybe. But not everything living on Earth is convinced of that. Some of them think you do their bidding, and I don’t mean your cat.

Let’s evaluate Earth from the point of view of fruit. Apples, for example. Apple trees hope you’ll eat their fruit, then throw away the core with its seeds so apples can expand their range. Or as they view it, so they can take over the world. They don’t entirely trust us, by the way: their seeds are too bitter to eat to make sure we’ll do the job right. How has this worked out? Exceptionally well. We love apples even as they manipulate us. They originated in central Asia and now get tender loving care in orchards all over the world. They dominate Washington State, shaping the economy and the lives of many people. Mission accomplished.

Still, you might feel doubtful. Do plants even know we exist? That’s a reasonable question. The answer is yes. Think about how carefully plants create flowers to cater to specific pollinators. When plants want to, they can even communicate with us humans. Tomatoes, for example, change color to tell you something: eat me! Their uncooked seeds can survive a tour of your alimentary canal, so make yourself a salad. Please.

Plants know you’re watching. We humans – and other animals – are very easy to control with food.

Another example: grass. Most of a grass plant grows underground. It sends up its leaves in a cunning ruse. In America’s Great Plains, bison come and eat the leaves, which are easily replaced, and in the process the bison also eat entire weeds and get rid of them for the prairie grass. This is how grasses wrested dominance over the plains. All they needed to do was encourage the evolution of bison, which took a while, but it was worth the time and effort.

Grass took over American suburbs in sort of the same way, using us and our lawn mowers like weekend bison. Your lawn has you well trained.

The fight between grass and weeds also holds a clue: plants can be horrible, especially to each other. In fact, one botanist, Augustin Pyrame de Candolle said, “All plants of a given place are in a state of war with respect to each other.” They fight primarily over sunlight, which is in limited supply, and they will fight to the death.

Roses, for example, grow thorns so they can sink them into whatever is around them and climb over it. If it’s another plant, and if by stealing all the sunlight they kill that other plant, roses don’t care. This is war – in your garden. Whose side are you on?

Jungles are a constant battle of trees versus lianas and other vines, which can weigh down and smother entire trees as they climb to sunshine. Plants also fight each other with poisons, and some fire-hardy plants, such as ponderosa pine trees in the western United States, will drop dry, oily needles to encourage lightning to kindle a flame. This is one reason we can’t prevent forest fires, no matter how hard we try. The pines are working against us.

So we’re not in charge on Earth, at least not as much as we think. Fortunately, our masters – plants – don’t seem to think very deeply, and they seem pretty willing to share the planet with us. But I write science fiction. What about other planets? What if the plants there were more thoughtful and far too willing?

So I decided to send, via a novel, a group of human colonists to a distant planet where they plan to establish a subsistence agricultural colony. They encounter an unexpected problem: the local dominant vegetation notices their arrival and sees what a clever, busy species they are, and how useful they would be. Meanwhile, these humans need to eat. As individuals, they will face dire choices as they struggle to survive and coexist. Who’s really in charge of their new home?