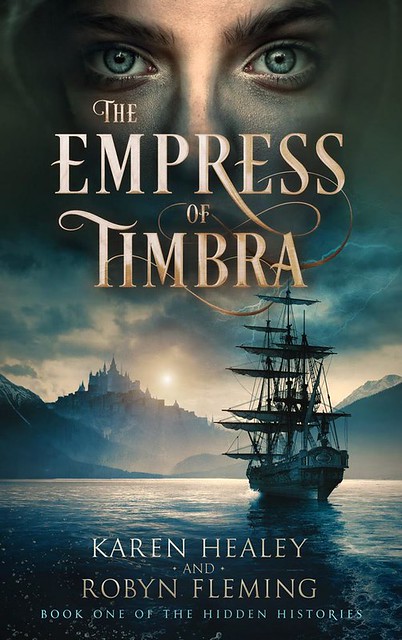 Author Karen Healey has some very specific advice about the use of apostrophes, and prologues. What is it and how does it have an impact on The Empress of Timbra, the novel she co-wrote with Robyn Fleming? Healey is here to fill you in on the details — with all the apostrophes in the correct place.

There are two pieces of high fantasy writing advice, often given, that I think are thoroughly sensible:

Don’t use apostrophes in names, because it’s a cliche. You’ll annoy your readers. Don’t write a prologue, because your world-building should be incorporated into the main plot; there’s no point in getting the reader interested in events that happened a generation or a century or a thousand years before your main narrative. You only run the risk they’ll be more intrigued with your prologue than what you’ve decided is the real story.

But just because you’re aware of the guidelines doesn’t mean you won’t convince yourself it’s all right not to follow them, especially when you’ve read enough high fantasy to know stories that have got away with breaking one or both of these rules to spectacular effect.

About a decade ago, my co-writer Robyn Fleming and I wrote an epistolary fantasy novel in the style of the Letter Game, exchanging emails back and forth across the Pacific Ocean. Like us, our protagonists were separated by an ocean, and like us, they were two young women who were close friends. But unlike us, they lived in a second-world high fantasy setting. They were discovering a vast conspiracy, getting embroiled in politics and romances, and saving two nations with a combination of smarts, luck, and magic.

They had apostrophes in their names.

We started the story as a game, but we realised pretty early on that we had something interesting, maybe even something worth developing into a real novel. So we showed it to some friends.

(For the record: Our apostrophes were meaningful. They were significant. They indicated status, linguistic drift, cultural detail, and history. They were the good kind of apostrophe!)

We took the book to a WisCon writing workshop. Every single critique told us to ditch the apostrophes.

“Fine,” we said. “Fine. We guess the world isn’t ready for our apostrophes.” We cut the goddamn apostrophes. The narrative retained its heart. We learned a valuable lesson about murdering our darlings.

Nobody told us to cut the prologue, and the reason for that was because nobody, including us, actually knew it was a prologue until long after we’d finished the sequel to the first book. The sequel wasn’t told in alternating letters, but in alternating chapters. The protagonists are Elaku and Taver, aged eleven and fourteen, the children of one of the main characters in the first book. The story follows them as they meet for the first time, figure out how to grow up, and, just incidentally, get caught up in a political plot that could destroy their homeland.

We had two protagonists again, and political machinations, and hefty doses of smarts, luck, and magic. We had blacksmithing and dangerous herbivores, religion and treachery, pirates and battles at sea.

This time, we left out the apostrophes.

The Empress of Timbra was undeniably a better book than its predecessor. Our villains were more interesting. Our world-building was stronger. The events of the first novel had sparked a period of rapid social and religious change, and through Taver and Elaku, we were able to explore the implications of that from the perspective of characters who were growing up in a world marked by those changes. And then we wrote a direct sequel to that book, still with Taver and Elaku, and plotted a third and realised… the first book was a 90,000 word prologue.

And we had to cut it.

I don’t regret writing that book. The prologue novel gives a depth and vividness to The Empress of Timbra that makes it feel like part of a larger, older world–which it is. Writing it allowed us to explore some big ideas. But when we gently folded that prologue novel away into a virtual drawer, we were able to concentrate on the even bigger ideas that followed it.

The real story isn’t about the women in that prologue novel. It’s about Taver and Elaku, two bastard half-siblings drawn into dangerous conspiracy in a changing world, relying on their smarts, their magic, their luck, and each other to prevent disaster.

So this is our advice to high fantasy writers who might be starting where we started: