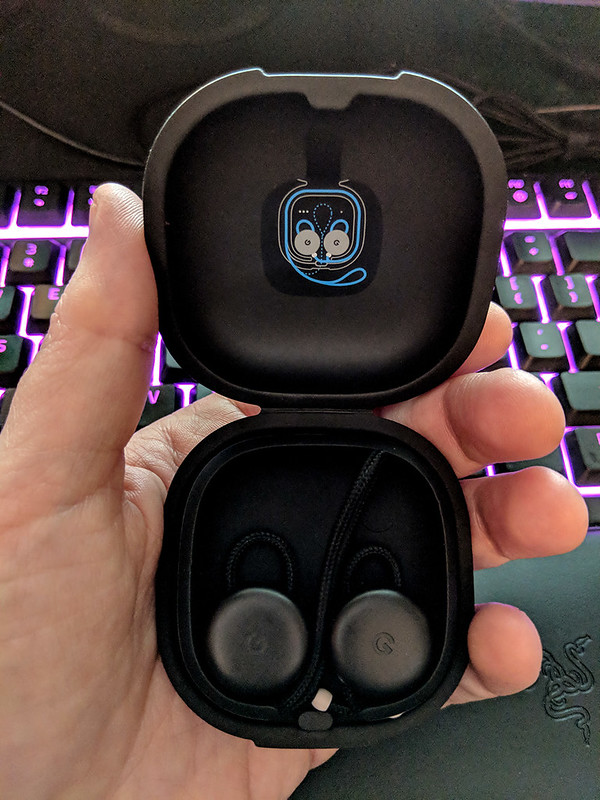 Because apparently I’ve gone entirely over to the Google side of the force and will be getting “Pixel 4 Lyfe” tattooed somewhere on my body, I’ve acquired a pair of Pixel Buds, the Google-manufactured wireless earbuds that are designed to work specifically with the Google Pixel 2 line of phones (which I have), although I understand they will work like a regular pair bluetooth earbuds with other phones and Bluetooth-compatible devices. I’ve had these for a bit over a week now but have only really used them a lot in the last couple of days (my previous Pixel 2 met a bad end thanks to a tile floor, and I only paired these with the new Pixel 2 the other day). I have thoughts on them. Here they are.

1. The Pixel Buds were not rapturously reviewed in other places, and I think a major knock on them is that they’re very fiddly, i.e., they work in a very specific way and require you to conform to that way, rather than them conforming to you. And in fact, that’s pretty accurate, not the least because in order to charge the buds you have to put them in their carrying case, so if you lose the case, you’re pretty much boned. Also the touch-sensitive surfaces of the earbuds are super-twitchy, which can be really annoying until you develop muscle memory for how to insert and remove the buds from your ears and otherwise interact with them. They’re certainly the most high-maintenance pair of earbuds I’ve owned.

2. Is their high-maintenance nature worth it? If you’re getting them just to have a pair of wireless earbuds, probably not — there are cheaper and less (literally) touchy earbuds you can buy to pair to your phone and listen to music or make phone calls. But if you have a Pixel 2 (or Pixel 2 XL) phone, and you are excited by the idea of having Google Assistant right in your ear and doing things for you at the tap of an earbud (like play music, or look up something, or get walking directions, etc), then, sure, they’re nifty.

I’m not entirely sure how I feel about the Google Assistant up in my ear, incidentally. As with many things relating to Google Assistant and Pixel-line products, I’m not sure that the various shortcuts to access it (squeezing the edge of your phone, the Pixel Bud ear press, the Pixelbook dedicated button) make it any more useful in a general sense than just looking something up via a Google search bar, especially because the Google search bar has voice recognition. It’s ostensibly nifty but in a practical sense I’m still looking for GA to really differentiate itself. That said, with the Pixel Buds you can keep your Pixel 2 in your pocket and direct it via the buds, and I suppose that’s not chopped liver.

3. One thing that is very nice about the Pixel Buds — if you have a Pixel 2 — is that it initially pairs with the phone simply by opening the holding case clamshell. It’s the easiest damn Bluetooth pairing I’ve ever done. With that said, in order to pair the buds to the second Pixel 2 after I unintentionally dashed the first phone on bathroom tiles, I had to do a factory reset (pressing a small button inside the case for fifteen seconds) otherwise the new phone wouldn’t find or pair with them. Once I did that, it was again super-simple to pair, but this was kind of a long way around, and I kind of had to figure it out myself. Something to keep in mind.

4. Another thing other reviewers were not in love with was the how the Pixel Buds fit in your ear with the help of cord loops that you adjust and then tuck into your ear folds. But that’s actually working pretty well for me. I guess maybe I have the right sort of ears for it (there are other earbuds that simply do not work for me — the kind that you stuff into your ear canal never work; they always, always fall out). I’ve walked around with the Pixel Buds in and they’ve stayed secure. You do have to readjust them every few times you put them in but that’s not difficult. I haven’t tried heavy exercise with them, but short of that they do just fine.

5. How do they sound? They sound good. The tone is pretty decent and they can get loud if you want them too. They’re not noise-cancelling and they sit outside your ear canal so you can still hear the outside world, which depending on your druthers may not be a great thing (but they get loud enough that you can drown out the outside world, too). Music sounds clear and fine, and the phone meeting I was on this morning was nice and clear in there. They work for their basic intended function.

6. The thing about the Pixel Buds needing to be in their case to charge isn’t my favorite not in the least because I’m almost guaranteed to lose that case at some point. On the other hand it means that the buds are almost always fully charged, and the case itself charges with a USB-C cord, as do the other Pixel products. When you have the Pixel Buds paired with a Pixel 2, the Bluetooth notification also tells you how much battery is left on the earbuds.

7. The major function that the Pixel Buds have that I’ve not tried is translation integration, on the reasoning that I’ve not spoken to anyone in anything other than English since I got them. I’m about to take a vacation to Mexico, and maybe if I don’t too feel dorky about it, I might try it there. The idea of someone speaking in their language and a (basic) translation coming out of my earbuds is gonna be very Babel Fish.

Overall: I like the Pixel Buds, but much of that is because they are in fact so well-integrated with the Pixel 2 and because I’ll willing to work with their inherent fiddliness. If you are as deep into the Google Pixel ecosystem as I clearly am, they are worth a look. If you’re not, maybe wait for the next iteration, or at least better integration with non-Pixel phones.

← The Big Idea: Karen Healey
Whoops, I Forgot To Update Today, So Here, Have Some Music →

13 Comments on “Thoughts on Pixel Buds”