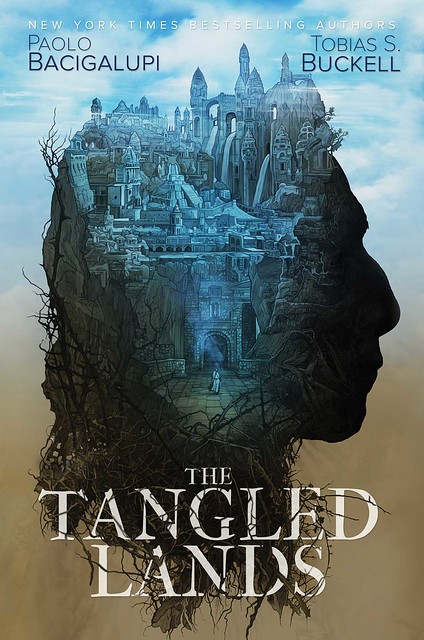 In their new novel The Tangled Lands, Paolo Bacigalupi and Tobias Buckell posit a world where magic is real — and exacts a toll, one different from what one might usually expect. Buckell is here today to expand and expound on that toll, and the parallels that toll has in our real world.

What if magic had a price? That isn’t a new idea in fantasy, or even in old stories. There is often a personal price paid for magic, whether it is Ariel dancing on legs that stab her like knives in the original Little Mermaid, exhaustion from casting a spell, or even needing to grind to find all the ingredients like herbs, experience, or spells in a video game in order to cast magic.

But what if magic had a price we all paid?

My latest book is a collaboration with Paolo Bacigalupi called The Tangled Lands. I remember that the moment we lit upon the idea of the bramble (the thorns of which can send you into an eternal deep sleep) and we realized that it would grow as a side effect of magic use, the entire world opened quickly up for us. Everything in the stories we began to write circled around this core struggle: how do people and society deal with the tragedy of the commons?

In The Tangled Lands, whenever magic is cast, there is a side effect: bramble appears. But it doesn’t just appear near where you cast it. It appears somewhere else, randomly,  a while later. It’s just a little, but it grows once it takes root. And it doesn’t take much to be dangerous.

How do you stop people from using it? Do you tell the mother of a child coughing blood she can’t use magic to heal him? Do you tell a mage not to use magic against an attacker?

And then a shopkeeper sweeping up after a long day brushes up against a crevice in a wall, and falls to the ground in a coma. Their son has to burn the bramble out of the walls carefully, then grieve over a parent stuck between life and death.

Who is at fault? How do folks prevent it from happening again? Because everyone has a reason to use magic. Just little charms, here or there. And over time… empires can fall under the choking grip of bramble.

There’s a horror to the almost creeping inevitability of society letting this slow-moving collapse consume us all… so it was intense to create a magical world dealing with the tragedy of the commons because it is a major issue we have faced before and will face over and over again. Whether it is overfishing, clear-cutting, or pollution, society has really struggled with this. But the moment you try to talk about a specific modern concern, people come to it with existing baggage. Examining the core idea without that baggage meant we had tremendous freedom in what stories we told.

Of course, chatting about crazy world building with another author and bouncing ideas off each other is the fun part. For me it’s always the honeymoon of a project like this. But when it comes time to write the book, you have to find a human story that engages.

We told stories about four people: an inventor trying to find a solution to some of these problems, but whose research is used in ways he never wanted, a mother seeking to rescue her children from re-education camps, a brother trying to care for bramble-kissed sister, and a blacksmith struggling to deal with the impact of inequality. But the truth is the story is really all about the land groaning under the weight of all the choices everyone makes on a daily basis about whether their own needs matter more.

I think, sometimes, when looking around at all the creeping inevitabilities heading toward us, we need to talk about them. Somehow. By using this fantasy world, I know I felt I could still tell the stories of individuals persevering against the massiveness of it all without also collapsing into a gibbering mess of despair myself because the real bramble was outside my window. Seeing these characters carry on no matter what, in some small way, gave me a little determination.