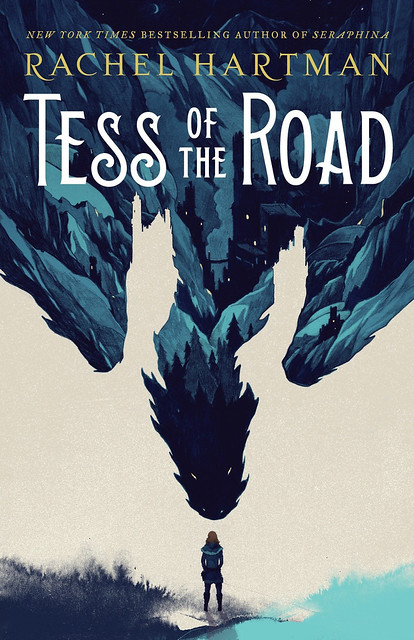 In imagining the story and characters that make up her novel Tess of the Road, author Rachel Hartman had to go places she initially didn’t expect or want to go. She’s here now to explain why she did eventually go there, and what it means for her and her work.

I can’t discuss the Big Idea behind Tess of the Road, alas, without talking about rape — in the abstract, not in gory detail. If you’re not up for that today and need to go, no worries. You get to choose. You are the protagonist of your own life.

That kind of agency is exactly what rape steals from us.

I like to give a heads-up – it only seems fair, the way you might warn a dinner guest that you have cats, are serving shellfish, or plan to be recreationally stung by bees later. With forewarning we allergic types can take take care of ourselves, popping a Benadryl or declining the invitation.

Pop culture, especially SFF, is full of rape, as anyone with this particular sensitivity can tell you. Even rape that isn’t there – implied, impending, alluded-to, narrowly missed – can be too much on a bad day, and I’m one of the lucky ones. My allergy is pretty mild.

I had no intention of adding to this superabundance. I was working on a happy-go-lucky picaresque road novel about a girl and her quigutl best friend. I knew what would happen if there was rape in the backstory – it would inevitably turn into Thelma and Louise. I love that movie, but no thank you. This was my jolly book!

Then I was struck by subtext in the place I least expected it – my community choir – and I had to rethink my position.

Our choir director gave us the song “Cakes and Ale.” It’s a round by Henry Purcell who, in addition to being the greatest English baroque composer, was also a famous seventeenth century party animal. (Legend has it that he died of pneumonia after his wife locked him out of the house in the rain late one night.) He wrote a lot of bawdy songs; “Cakes and Ale” isn’t even his bawdiest.

The narrator of this particular song talks about plying a woman with alcohol and trinkets in hopes that she’ll be “wondrous merry” with him. That could plausibly mean a variety of things, until he says “merry my cock” and removes all doubt. That wasn’t the part that made me feel sick, however. It was the line, “I thought she was afear’d ‘til she stroked my Beard.”

I know what arguments have popped into your head; they also popped into mine. Afear’d is just meant to rhyme with beard – what else was he going to say? Weird? Engineered? Did “cock” mean cock in the eighteenth century, anyway? And the lady stopped being afraid, didn’t she?

She did, if you trust the assessment of the guy who’d been getting her drunk all evening.

Nine times out of ten, I might have thought Ugh, gross, and not been any more bothered than that. Trauma comes back on you like reflux, though, and mine had been recently bubbling up again. I couldn’t stop thinking about the nameless woman in the song. Had she really stopped being afraid, or had the drink extinguished the light in her eyes? Had she swallowed her fear down and tried make the best of things? The whole scenario made me squirm.

I have had plenty of experience with this kind of discomfort, and I have a variety of things I do to take care of myself. First thing I did was sit down and write a parody of the song. Mock your misery away, is my motto!

And drink both strong and grapey.

You might say, “What the hell, it’s a classic — Purcell!”

But this song is wondrous rapey.

It went downhill from there. Annoyingly, the parodizing didn’t make me feel much better. In fact, it merely clarified the things that had bothered me about the song in the first place.

Is that not what he meant?

Ugh, gross. It was time to implement Self-Care Phase 2: talking to a friend.

When you’re struggling, choice of friend is important. I generally have good instincts about these things, and I had an intuition that Karen, a new friend, was the one to approach. She was in my choir, and had always struck me as reasonable and level-headed. In fact, she made me think of the hyper-rational, mathematically-minded dragons from my first novel, Seraphina. I had great hopes that she would use impeccable logic to tell me I was overreacting.

She did not disappoint, but promptly logicked me right under the table: “Just going by the statistics…”

Ah! She was going to school me with math and prove that I was too sensitive about this song.

“…it’s highly likely that five or six other singers, at least, feel the same as you, or worse. You just happen to be the most dedicated parodist. I think you should send this to Earle.”

Earle, our director, was a delightful Old Hippie, dedicated to putting the community in community choir. If a song made anyone uncomfortable, for any reason, he would find us something else to sing. He’d done it before.

“I can’t ask him to change songs,” I protested. “People should be able to choose to sing this if they want.”

“People,” said Karen gently, “should be able to choose kindness when someone else is hurting. And they can’t choose that, if they don’t know you’re hurt.”

I sent Earle my parody without explanation. He got my drift; one particular line – rapey rapey rapey so goddamn rapey – wasn’t entirely subtle. The next day, he announced on our choir’s Facebook page that “Cakes and Ale” had made someone uncomfortable, so we weren’t going to sing it. He’d bring new music next week.

I tried to stay out of it; Earle hadn’t named me, and I didn’t need the aggravation. I couldn’t stop reading the comments, though. All the usual epithets came into play: Censorship! Political correctness! Special snowflakes! One older woman went on a lengthy tirade about what fragile prudes today’s youth were (I was over forty; it would have been funny if it hadn’t been mortifying). Back in her day, they had understood bawdy songs – and the occasional ass grab – for what they really were: fun and playful!

Earle interjected: Maybe this person objected due to personal experience, not prudishness.

He was being too subtle for her. The ranting continued; she was particularly incensed that I’d complained anonymously, that I hadn’t had the guts to debate in the open. I was a bully, a harpy, a shrill moralizing bitch imposing my will on everyone else.

She just wanted a choice.

I wrote back: I’m the one who found the song rapey. I told Earle via e-mail because I don’t feel I should have to stand up in front of the whole choir and talk about painful personal experiences.

She backed down. Things looked different when I was someone she knew, and not some hypothetical censorious Millennial out to spoil the Baby Boomers’ fun.

What I didn’t realize right away was that I also looked different to her in light of this knew knowledge. The next week at choir she took special pains to say hello, and ask me how I was doing. Weeks passed, and every time she saw me she’d get this pitying look on her face. Sometimes she’d even try to hug me (I dodged), as if I had been magically transformed into someone broken, wounded, and pathetic.

Fighting online had been galling, but this was worse. Were those my only choices, in her eyes? Avenging fury or shattered victim? I began to get angry for real.

Stories shape our expectations and understandings of what’s possible. Our culture has generally whittled it down to two possibilities for sexual assault survivors. You can be a victim, often dead, frequently erased, the great shipwreck of your life serving only as the impetus for someone else’s story. Or you can be an avenger, out to kill the menz (and spoil everyone else’s chill by not letting them sing bawdy songs). That sounds better, and at some level it is, but it’s not like you have much choice in that scenario either. You life is still all about him, and what he did to you. And hey, if you’re super talented and lucky, you can still end up pretty damn dead, like Thelma and Louise.

That’s not the way I would choose to be the protagonist of my own life. There were so many other roads back to self, so many coping strategies, so much life and beauty even after you think your life has been destroyed. It was frustrating that this woman didn’t have any other mental models to choose from.

And that’s when I knew my road novel – my happy-go-lucky picaresque – was going to have rape in the backstory, and that this would not transform it into Thelma and Louise. Tess would walk, and fall, and get up, and find her way back from trauma, just like so many of us do every day (but with dragons).

We get to be the heroes of our own hearts, because we get to choose.

In the end, I wasn’t sorry we dropped “Cakes and Ale.” Another soprano, a woman in her sixties, came up to me later and whispered, “Thank you. I had been calling it The Date Rape Song.” I smiled, realizing we were veterans of the same war, both of us coping through humor and friendship.

I wrote this book for her. And for you. And for all of us struggling to walk on.