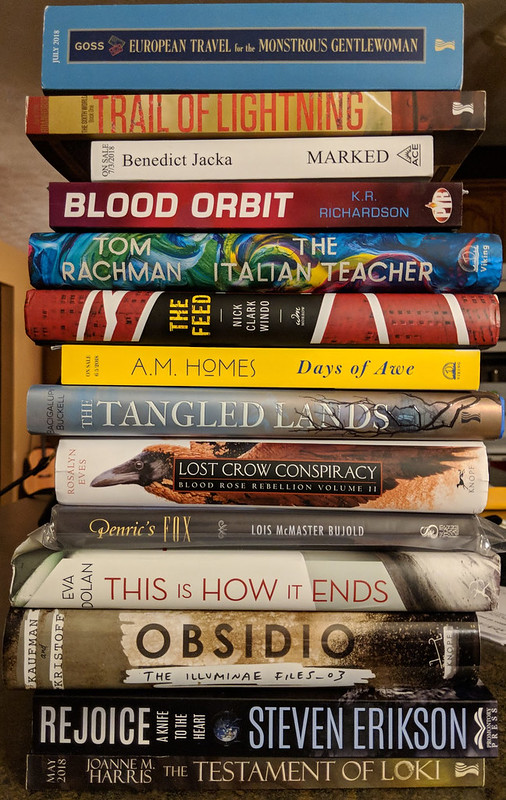 A new month and a new stack of books and ARCs that have come to the Scalzi Compound. What in this stack do you want to put into your own “to be read” pile? Tell us in the comments. 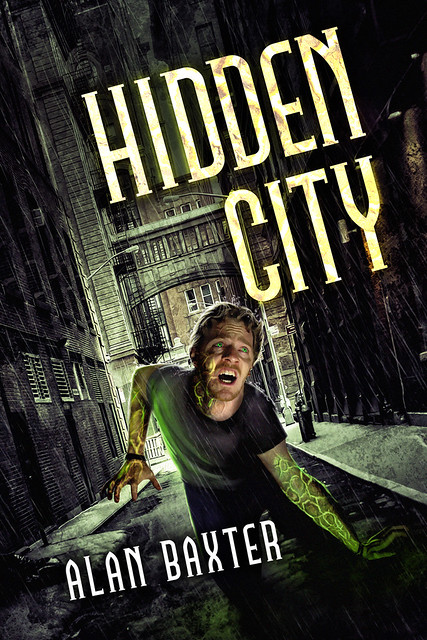 As any metropolitan partisan will tell you, cities have their own feel and personality — but in Hidden City, author Alan Baxter takes that idea and, shall we say, runs with it. Get ready.

Cities are living things. Some are so alive they’re almost sentient. Imagine a brain, made of billions of neurons all interacting to create consciousness. Now picture a city with millions of people, each acting like a bunch of neurons in a brain. Of course, this is massively over-simplified, and will no doubt be making any biologists reading cringe and want to break things. But, in essence, this is the first big idea behind Hidden City.

All cities do, of course, have a living vibe, we imbue them with personality. I’ve always loved noir stories where place and setting are as important as the characters; where, in fact, the city is a character. The fictional city of Cleveport in this book most definitely fulfils that role. But in most noir stories, the city is passive while the people are active, front-and-center. That’s not what I wanted here. And the other thing about this idea was that I didn’t just want a living city. I wanted a city that was sick. Dying, in fact.

That presented an immediate problem. Cleveport, as a central character, had to have a believable personality. It turns out I’d set myself an unenviable task. For a while I didn’t think I’d be able to pull it off. How could I make her character shine through? How could she be an active player?

However, for me, a book is never made from just one or two big ideas. Certainly those are often the trigger, as with the idea of Cleveport here, but I need a conglomeration of big and small ideas that keep crashing together until they eventually form a kind of critical mass. That’s when a story is born, kicking and screaming, demanding to be fed — I mean, told. The second set of ideas that really started gelling Hidden City together were focused around magic. If a city was more sentient than most, there’s every chance it would attract magical people, even if they didn’t realize themselves that’s what was happening.

Then I started to think about what might happen to that magic and those people when the city became sick. How would Cleveport’s character show through them? I wondered if the magic would wane, but then something else occurred to me. What if it became inexplicably more potent? And no one realized that was a Bad Thing™. That led me to my next set of problems. I’m not lying when I tell you this book was by far the hardest I’ve ever written in terms of making the ideas work.

The next issue centered on what kind of illness might affect a city? What other sort of symptoms would it present? How would that subsequently affect everything else? I needed effects beyond the strange increase in magic. In the same way that a fever might inhibit a person’s ability to function, it might also show up physically as a rash. Or blistering pustulent sores. Or something. So poor old Cleveport developed an outbreak of parasitic fungus that attacks her population, turning them into violent lunatics. Because, let’s be honest, what better complement to a sick city than homicidal madness?

This fungus and its parasitic lifecycle became something of an obsession for a while. I had to learn a lot to make it work alongside everything else. So I studied. Did you know, for example, that the biggest living organism on Earth is not the blue whale? It’s a mushroom. Well, specifically it’s a honey fungus, apparently very tasty, and there’s one in Oregon that is 2.4 miles across. Yes, miles. One organism. Imagine if that wasn’t tasty, but deadly. And imagine if could spread as fast as people can run. And imagine if it used people as its infection vector. And imagine what it’s like living in my head sometimes.

Anyway, now I had the meat and bones of this novel. Noir, fantasy, magic, horror, action. But plot is not story. Characters are story, and a book needs more than one. Cleveport is certainly the central character in Hidden City, but not the protagonist. That turned out to be a run-down, mildly magical gumshoe called Steven Hines, who specializes in missing persons cases. While authorities start shutting things down and closing the city boundaries, concentrating on the symptoms of the outbreak, only Hines – his talent giving him a clearer than most connection to his city – has spotted the underlying causes. Or at least, he’s spotted that there must be underlying causes.

And something else about story. It’s not just in the characters and how they respond to the immediate threat, but how they respond despite their ongoing lives. Hines didn’t just pop up to deal with the sickness in Cleveport. He’s got shit going on, same as everyone. Through that lens of character – Cleveport, Hines, his buddy Detective Sergeant Abby Jones, and a few key others – I got to explore themes of loss and sacrifice, love and friendship, arrogance and heroism, all while a city suffered. While everyone suffered. And while it was an incredibly difficult book to write, I’m very happy with the way it all came together in the end. Because along with underlying causes, there has to be a root cause, right? And that was the biggest idea of all. But that, of course, would be a spoiler.