I was sent an email today by a Whatever reader noting that I was notably light on political commentary here these days and being curious as to why that might be. It’s a good question, and the answers are, alas, not that exciting:

1. My previously-noted Trump Quandry is still in effect, in which things happen fast enough that by the time I have what I consider a useful opinion on something, it’s three to seven major political news stories back in the slipstream;

2. The above-mentioned phenomenon means that Twitter is actually the best place for me to do a quick reaction/bit of snark, and having done that, move on to the next thing;

3. Even the longer thoughts I have eventually boil down to “Malign and/or incompetent people are running the country and this latest thing just accentuates that point again,” and there’s only so many ways to play that variation of a theme without getting bored, and I’m kinda bored of it;

4. Hey, there’s a novel I’m writing with a deadline coming up! So that’s a thing, too.

And also there’s the thing that honestly writing a long piece about politics now just fills me with ennui and a desire to take nap, and while naps are objectively great, the ennui part is not so much. Right now, I just don’t wanna, basically. So, I don’t — or don’t as much — and put most of my editorializing on Twitter. It’s not to say that from time to time I won’t have something I want to pursue at a longer length. It simply means I’m having relatively fewer moments like that at the moment.

Honestly I think part of it is that as much as anything else I’m finding this current political moment sad. For example, that fool Sam Nunberg today, a former Trump campaign official who’s been traipsing from one cable outlet to the next, becoming progressively unhinged as he goes along. Sure, he’s a landfill of snarkable moments, and also, underlying that is the increasingly likely possibility our current president is a Russian tool, unwitting or otherwise, and, I don’t know. That kind of ruins the fun for me. Now, maybe that’s temporary — a lot really is contingent on other factors, like actual work I get paid for taking up brain cycles — but right now that’s where I’m at.

So this is why political commentary is sorta sparse here at the moment. In its place: Lots of pictures and reviews of tech and otherwise whatever I feel like writing about — which is why it’s called “Whatever.” I’m pretty sure the urge to write more, and in detail, about politics will come around again. Until then, I’ll just keep doing what I’m doing. 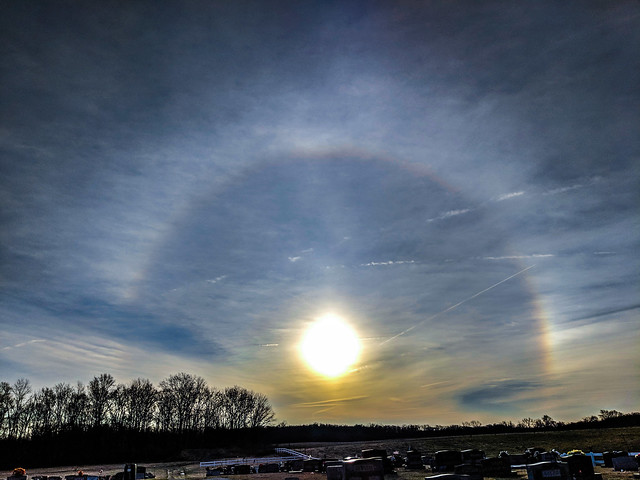 I saw this beaut on the way to the gas station this morning; I pulled over to snap a photo with my phone. As a fun bit of trivia, the place I pulled into was Harris Creek Cemetery, which many of you may recognize as the cemetery at the very beginning of Old Man’s War. Kathy Perry will one day be buried over there to the right. I bumped up the contrast and saturation in the picture so you can see the entire bow better, but I assure you it was pretty impressive in real life, too.

This is one of the nice things about living in the modern era, incidentally: One has a decent camera with one pretty much all the time now. This picture probably would have looked better if I had taken it with my dSLR, but then I’m not lugging it with me when I go to the gas station. As they, the best camera is the one you have one you, and fortunately phone cameras these days do a pretty good job.

Speaking of cameras and things they capture in the sky, here’s a thing if you missed me posting it last night on Twitter:

And there they are! Venus (left) and Mercury. This is one of the very few times, incidentally, I've been able to spot Mercury with my naked eye. A very good night for me, astronomically speaking. pic.twitter.com/X7ijKFQKXt

After I posted this, astronomer Phil Plait told me that reportedly Copernicus himself never caught a glimpse of Mercury, so I had that on him. And I was all, Yeah! Suck it, Copernicus! Sure, he established the heliocentric theory, but I saw the smallest planet with my bare eye! That evens things out! History books should be updated with this equivalence presently.

There, I hope you have enjoyed these views of the sky through my cameras’ eyes. Off you go now into your Monday. Hope it’s a good one.