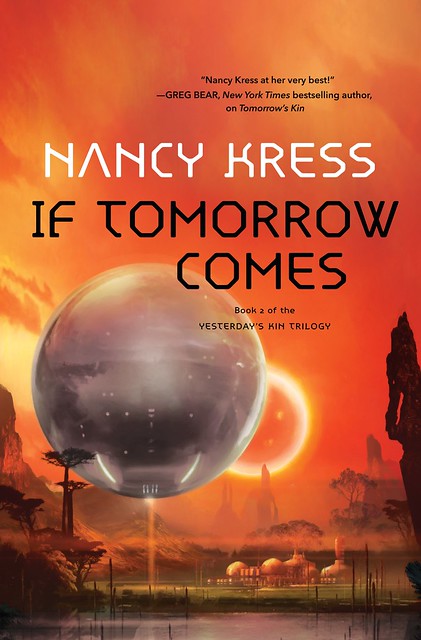 Everyone wants to do the right thing — but sometimes knowing what is “right” is not so simple, especially when there there are rules and regulations to consider. Or so Nancy Kress discovered, as she did her research for her new novel, If Tomorrow Comes.

Much fiction, in both SF and mainstream, is built around a character whose deeply-held values clash with each other. Paul Atreides in Frank Herbert’s classic, Dune, wants both to avoid immediate violence and to keep humanity from extinguishing itself millennia later; he cannot do both. Binti, in Nnedi Okonafor’s eponymous novel, both wants to remain a member of her native, stay-at-home culture and leave it for the wider world of an interstellar university. The protagonist of  Ted Chiang’s “Story of Your Life” must choose between conceiving a child that she knows will die young and avoiding the pain which that inevitable death will bring. For such emotional choices, there are no formal guidelines, no given laws.

A viewpoint character in my novel If Tomorrow Comes faces this clash of values: a deeply held loyalty to the U.S. Army versus obedience to the orders of a superior officer that he cannot, in good conscience, follow, even though those orders are lawful. Corporal Leo Brodie, a sniper assigned in unusual circumstances to a small U.S. Ranger unit on the planet World, has to make some tough decisions. Lives, both Terran and alien, are at stake. Leo doesn’t want to go rogue. He doesn’t want leadership. He certainly doesn’t want to lead any sort of mutiny. And his commanding officer once saved Leo’s life.

Leo Brodie is not the only viewpoint character in If Tomorrow Comes, the sequel to last year’s Tomorrow’s Kin, and his is not the only problem faced by the small band of Terrans who have traveled from Earth to World. Geneticist Marianne Jenner faces an entire continent menaced by a deadly epidemic. Physician Salah Bourgiba struggles with his role in this mission, so much of which went wrong from the beginning. But, I admit, Leo Brodie became my favorite character, and the clash of values that he faces ended up driving the book.

Military disobedience certainly isn’t a new phenomenon, and it hasn’t always had the clear outcomes that the Code of Justice seems to imply. Just a few examples: in WWI Lt. Frank Luke, Jr, an ace airman with the U.S. Army Air Corps, was grounded by his commanding officer and told he would be considered AWOL if he disobeyed. Luke flew anyway, shot down both enemy aircraft and observation balloons, and was eventually forced down and killed by the enemy. Posthumously he was awarded the Medal of Honor. In the Korean War, Lt. David Teich was ordered to leave behind a Ranger company under heavy fire. Instead, Teich led four tanks to the Rangers’ position and rescued sixty-five stranded Rangers—so many that they covered the tanks’ turrets. In Afghanistan, Marine Cpl. Dakota Meyer disobeyed orders to rescue stranded Afghan soldiers and retrieve the bodies of four American troops.  He, too, received the Medal of Honor.

There are no medals to be awarded on the pacifist planet World, and no one to award them. In addition, each case cited above concerned defying orders to not do something. Leo Brodie not only did that but also formulated a separate, secret military line of action. His clash of values leads him, again and again, farther than he ever anticipated from the military oath he swore on Terra.

As I wrote If Tomorrow Comes, I felt the fear of all writers venturing into unfamiliar territory: Am I going to make a fool of myself? I have never served in the military. No one in my family has served since WWII with the sole exception of my niece, who is a Navy JAG and would probably court-martial Leo Brodie. So I did much research. I read memoirs by Rangers who served in Iraq. I did on-line research for updates. I read the Ranger Handbook: Ranger Training Brigade, United States Army Infantry School (and I can now construct a field antenna, should the need ever arise). I read parts of the Manual for Courts Martial. And then, just to make sure I did not make a fool of myself, I hired an ex-Ranger to read and correct the manuscript. He was incredibly helpful.

Fiction can also, of course, be built around clashing values that exist not within a character’s mind but between different groups. This is why wars are fought. Why alliances honored—or disregarded. Why crimes are committed and investigated (“I value your property, life, body—and so do you”). If Tomorrow Comes includes inter-group clashes, too. Some want to help World, some to destroy it. Some want to preserve a traditional culture, some to change it. Some want to distribute vaccine fairly, some to hoard it. But it is Leo’s struggle that drives the book, and his choices that made me want to write it.

David Teich, who retired as an Army Major, once said, “I’ve got a moral obligation as an officer to do things that are right.” However, it is not always easy to know what those things are. Such decisions may become relevant in our own near future, as a military faces growing international threats in an increasingly dangerous and unpredictable world.

← The Dispatcher is now a New York Times Bestseller
New Books and ARCs, 3/9/18 →